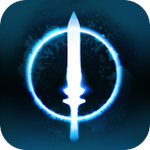 One minute spent with God of Blades (Free) and it’s clear that it isn’t the most mechanically complex or the tightest side-scrolling hack-and-slash out there. Its biggest problem is its scenario design, which is ignorant of how floaty the core combat feels. Boss fights in particular are too technical and desire a level of mastery impossible to summon given how your guy kinda glides and bounces through the battlefield.

But what God of Blades lacks in functional mechanical sizzle, it makes up for threefold with amazing art and sound direction. The tortured, veiny world the art conjures and the surreal music it uses to bolster its paranoid sci-fi vibe are both riveting aspects that suck you into a surreal universe and refuse to let go.

In short, God of Blades is one of those style over substance games in which the creative elements manage to trump everything else. Its ability to consistently deliver the exotic and bizarre pays off; its curiosities are the engaging thing here, the mechanics are an oddly secondary kind of thing.

And it all begins with a shot of the cosmos. Strange, synthesized sounds burp out of the speaker as you’re alerted to the fact that a “Black Wind" has returned. Worlds are being thrust into void, the “Great Doom" is upon the universe. You, a carrion king who was once a great Hero, are tasked with annihilating this evil.

Boiling down the action, God of Blades is a 2D fighter with an auto-run mechanic. The auto running is nice because it leaves you to focus on the micro-managing of the upswings, the downswings, the spinning slashes, and the parries that compose the swipe-based swordplay component. 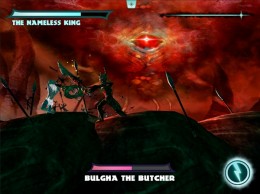 Presumably, the combat was intended to deliver on a rock, paper, scissors style of brawling. Enemies rush you from right to left, telegraphing swings that you should be able to counter by picking the opposite swing. In the first couple of chapters, enemies tend to be merely freakish fodder, easily cleaved through with one or two swings.

This is actually where the fighting feels the best. In these initial stages it’s a game more about spacing instead of raw, technical skill. If you set up attacks as dudes rush into the picture, you’ll slice through them cleanly and continue to run without a hitch.

It’s in these moments that the combat feels almost rhythm-like. You’re swiping out a song of woe in perfect time with a combat beat, your swings the notes and death the verse. But later the combat starts trying to be too technical, and it stumbles for it. It introduces enemies that require specific parries and swings, which would be fine if the combat felt tight. But the Nameless King swings his sword sullenly. He also bounces off enemies’ gigantic hit boxes, knocking him backwards and out of range. Never sure if you’ll connect, you swing wildly. So will the opponent.

It’s at this point that you’ll start realizing that God of Blades is missing frames of needed animation to pull off moves precisely as it seems to want you to. And that’s not to mention that the King glides as opposed to “runs." He has a floaty kind of feel that doesn’t cooperate with the game’s increasingly rigid combat structure. 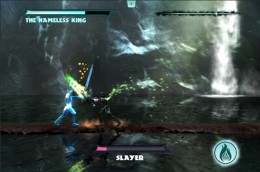 What helps mitigate these moments of frustration is an endless mode, which sort of gives you the ability to really nail down how you need to approach each new foe. Also, a sword upgrade doesn’t hurt. As you play in the campaign, you’ll unlock faster, heavier, shorter, and longer swords. Each seems to be poison to a specific enemy type.

But here’s the thing: even when the game isn’t clicking, the theme, story, and visuals more than make up for it.

God of Blades tells a pulpy story made tonally interesting thanks to meaty word choices that jive with an overall haunting vibe. Pall, devouring, succor, howling — these are the words that creator White Whale Games chooses to use to describe the universe, and it works well.

Exotic and progressive are a couple we’ll use to describe the dreamscapes, which look a little something like 1970s fantasy book cover art come to life. The monsters are horrifically realized, often engorged with the bizarre musculature you’d see in Conan books. The wicked worlds you’ll run across are disheveled things rife with signs of delusional punishments and life that keep you looking around and playing. And the color scheme used is grippingly unusual, sparkling with shades of greens and purples that you straight-up never see in video games.

Joining these delightfully wretched dreamscapes is a soundtrack that draws from 1970s synth-pop. Specifically, the audio captures that paranoid and dark sci-fi feel that Tubeway Army managed to capture so well with the album Replicas. This is an intensely cool creative choice that works well.

Combined, you get an interesting universe that pulls quite a bit of the load. This thing is packed with the strange and freakish, all held together tonally by sharp writing and delightfully odd sounds. You can’t help but want to look around the next corner, even if it contains another enemy that may have you fumbling.

So, yeah, looking strictly at its mechanical core, God of Blades isn’t always that kind of satisfying hack-and-slash that it wants to be. But it doesn’t matter. The universe is too strong. The distinctive sights and sounds are worth the effort.