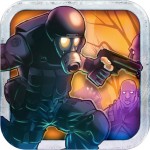 We’ve had our eyes on Apocalypse Max ($3.99) since it launched on iOS earlier this month (we even took it for a test drive during one of our TA Plays). Now that we’ve had an opportunity to check it out further, it’s obvious that Wandake Games has put a lot of effort into its zombie-killing side-scroller. While Apocalypse Max isn’t perfect (particularly in regards to its controls), its impressive visuals, fast-paced gameplay and decent amount of content breathe new life into the somewhat tiring zombie theme.

Apocalypse Max puts you in the role of Max (duh), the only survivor of the zombie infection on Hellthroat Island. Being the sole human on an island of undead, Max does what anyone else would do in the situation: go on a one-man zombie genocide while trying to figure out a way to escape. Max will journey through nine different regions of Hellthroat in a side-scrolling, shoot-em-up platformer taking on a wide variety of zombies. Action is fast, frenetic and challenging as you try to get through each level while holding off the hordes of zombies teleporting onto the field. Thankfully there are also a bevy of different weapons to make the adventure interesting. 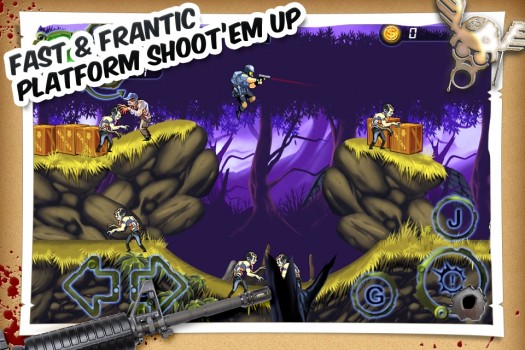 Weapons in Apocalypse Max serve as the primary coin sink for the cash you’ll collect while killing zombies. Choices range from standards like the shotgun and rifle, to the bit more exotic like the pulse rifle. Each weapon can further be upgraded to increase stats, and ammo for all but the standard pistol must be purchased between levels. I’m a fan of the weapons system, as each gun does a decent job offering it’s own play style while still being balanced against the other selections.

Speaking of balance, Max does a good job juggling coin collection and upgrade paths with the inevitable increase in difficulty at later levels. Sure, there’s an IAP store for instantly buying more coins to upgrade your arsenal, but I didn’t find it particularly necessary during my play-through. Granted, levels can’t easily be replayed to earn more coins (unless you beat your previous high score), but overall Max hits that difficulty parity which seems so hard to accomplish. 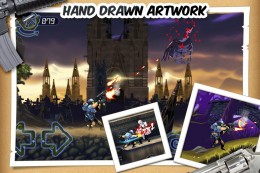 Another area that Apocalypse Max does a great job in is its visual system. Retina-quality visuals look crisp and colorful with every zombie decapitation shown clearly in all its glory. In addition, the game moves at a great framerate, with little slowdown on current iOS devices. Decent weapon effects and explosions round out the graphical flourishes. Make no mistake, Max boasts some heightened production values, and you can really see them in the world of Hellthroat Island.

The one area that feels off in Apocalypse Max is its controls, specifically its reliance on a dearth of virtual controls. You’ll find on-screen controls for movement (left and right), jumping, grenades, shooting, and swapping weapons. Of course, none of these sound particularly stringent, but the fact that all buttons are always on screen make for a pretty crowded playing field (especially on the smaller iPhone). I feel like Max could have taken advantage of swipe mechanics a bit more, as melee attacking is the only action that doesn’t have a perpetual button.

There are a few other minor issues besides the virtual controls. Jumping and movement, while fine on their own, aren’t as precise when combined together. Considering later levels offer a decent chunk of platforming elements, the control imprecisions become a bit more magnified. When you add in shooting (or knife swiping) to the mix, Apocalypse Max can occasionally become frustrating with all the juggling. Features such as auto-aim mitigate some of the challenges, but it wasn’t as responsive as I’d like.

Still, the control issues mentioned above, while frustrating, don’t detract greatly from the rest of the game. Apocalypse Max is still a great hybrid of platforming and shoot-em-up elements. Sure, zombie themes may have become tiring, but a great game will excel regardless of superficial thematics. In that vein, action fans looking for something new should simply check out Apocalypse Max.