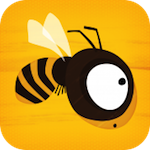 Heads up: there’s more stuff to do in Bee Leader ($0.99) now. A recent content update folds in three new levels into the games’ London Fun themed world. The update also adds a “bonus" level set in a trailer park.

Joypad support, minor fixes for the iPhone 3GS version of the game, and improved device rotation round out the tweaks part of the update.

In other Bee Leader news, creator Flightless has released a free version of the app (Free) and it’s available now. The free version gates five of the game’s worlds behind IAP, but it should give you a pretty good indication if you’ll dig Bee Leader or not enough to dive in. Spoiler: it’s good.