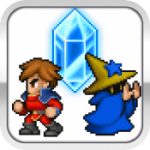 Square Enix’s latest iOS release is out, hot, and confusing the crap out of people. Final Fantasy Dimensions (Free) is a free download, but unlocking the full game will cost you more than Final Fantasy Tactics ($13.99) and Chrono Trigger ($9.99) combined. This is Dimensions’ English-language debut, but it’s not an iOS original. Oh, and you can get the free part now, but you can’t buy it yet due to some strange App Store SNAFU where Dimension’s in-game store shows no available chapters for purchase.

So, what is Dimensions, really? It’s an update of a chapter game released in Japan as Final Fantasy Legends over late 2010 and 2011, so it’s still basically a new game. It’s also distinctly 16-bit in style, and uses a job system similar to that in Final Fantasy V and Final Fantasy Tactics, so it’s old-school. It’s full of NES and SNES era Final Fantasy references, including the “crystal theme" scales and the blue screen of introduction. If you’ve ever wished that there were more pre-VII Final Fantasy games, you’re the target audience. 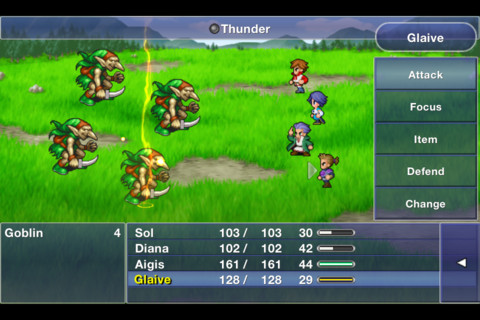 I currently have a piece of Final Fantasy VI fan art (by the incomparable Zac Gorman) as my wallpaper, so I can’t claim to be unbiased.

The Prologue of Dimensions clearly isn’t intended to sell you on the game’s system: the job system doesn’t unlock on this side of the paywall, and the combat ramps up just enough to make you pay attention without ever becoming a real challenge. It also won’t sell you on the originality of the story or characters – both are more comfortably familiar than refreshing, with a plot that begins like a benign mashup of Final Fantasies I and IV, and the characters like the childhood friends of Chrono Trigger, though less immediately distinctive.

Instead, the game is going to pitch itself to you on it’s nostalgia value, its implementation in iOS, and the sense that things are really going to pick up from here. 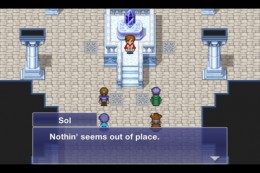 The nostalgia value is the most subjective. I found it pleasantly familiar, but others will find it dull or cloying.

The implementation is superb, and it may have helped that this game was originally designed for mobile gaming. There are three different control schemes: fixed virtual controls, a slide-to-move mechanic similar to the much-maligned default controls of Cthulhu Saves the World ($1.99), and the game’s default controls, a “best of both" interface that pops up a d-pad wherever you touch which can then be used as a virtual controller or the compass rose (center point) for swipe-to-move. The d-pad is a bit large, and cannot be resized or made invisible, but otherwise should accommodate nearly every gamer’s preferences.

Menus are also multi-control, including the combat menus, where you can touch the monster you want to attack or select the box with it’s name on the right hand side of the screen. Contextually appropriate controls, like a “target all" button, pop up when appropriate, and tapping them a second time toggles them back off. To equip different characters, you can go into their equip menu then back to the main menu, or you can speed things up by tapping on other characters’ portraits or cycling though your ranks by tapping the left or right sides of the item information window (tiny arrows cue you in to this option, but the sensitive area itself is generous).

With Dimensions’ large party cap (5) and all the ability and equipment swapping the jobs system will require, this should really make quick-changes a breeze. If you get tired of the default chiptunes, you can select other tracks (though this is part of the IAP) or adjust the game’s music volume (controllable separately from sound effects) and put on your favorite playlist. The game’s sped-up autobattle mode makes hash of weak enemies, and turns off at a tap if you get into trouble.

The effort put into the UI, and the plot twist at the end of the Prologue (spoiler: the world gets split into light and dark parallel worlds, and you’ll control a party in each one) suggest that Dimensions quickly expands from a tightly-constrained and simple retro title into something much larger and more interesting, with a large cast, lots of combinations of equipment and abilities, and maybe even a different take on the “light v.s. dark" stories of the early Final Fantasy titles.

I just wish I was more invested in the characters at this point. With the lack of available of launch day IAP unlocks, Dimension’s pay structure could backfire on Square. The first part of the game is free, but with the strongest elements of gameplay (and, hopefully story) hidden behind the broken paywall, some players will have moved on by time the patch comes out.

After the patch is out, we’ll review the rest of the game.

Editor Note: This game has us in a strange position in that people are hungry for a review of it (and we’re anxious to provide one) but the inability of the IAP unlocks hasn’t allowed us to scratch the surface of anything other than the free prologue portion. Going into a holiday weekend, it seems to make sense to just review what we can play, and we’ll revisit the game in the future once we’re allowed access to the rest of it which hopefully happens pretty soon. The three star score is based on what we can play, and the overall score for Final Fantasy Dimensions likely will fluctuate either up or down once we get through the rest of its content, explore the job system, and experience everything else it has to offer.