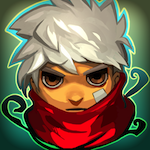 Surprise! Supergiant Games has been working on an iPad port of Bastion. It’ll launch a little later tonight, as international releases worm their way across the globe. If you have played Bastion before, on either XBLA or in your browser or on PC, you’ll feel at home with this version. While it does contain some minor tweaks, it’s functionally the same game that you should have, and probably have, checked out before.

For those of you not in the loop, Bastion is an action RPG that tasks you, as The Kid, with restoring a floating island to its former glory. In the process of rebuilding, you learn a thing or two about a beautiful world gone wrong. You’ll also kill tons of weird bad guys, like, say, floating blobs and deformed blue things with scythes.

The game’s most engaging aspects is its story-telling. Bastion doesn’t beat you over the head with cut-scenes or loads of dialogue. Instead, a gravely voiced narrator delicately dispenses context as you explore the game. He’s restrained with it, too, leaving some mystery in the air that gently prods you forward. 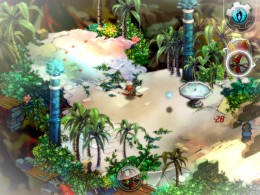 This narrator, dubbed The Stranger, is also dynamic. As you pick up weapons, rebuild certain parts of the Bastion, and even fall off ledges, he’ll comment. It’s a neat touch that lets you sorta feel like The Kid instead of just his puppeteer.

Another thing Bastion does right: combat. It’s two weapon system is deceptively deep, thanks to the dozens of possible combinations coupled with a customization system that allows you to bump up speed, strength, and ammunition.

Nuts and bolts wise, combat can be boiled down to simple button mashing, but you can exploit deeper systems. If you’re carrying the hammer, for example, you can get much more out of it by holding an attack to unleash a more powerful one. You also get the option to straight-up dodge attacks or use a shield to block them.

This iPad version and the other versions of Bastion do differ. For starters, this one packages in the game’s DLC. Also, some combat and upgrade mechanics have been tweaked, too, presumably balancing out the limitation of the touch screen. It also seems like health potions drop more regularly, but this could be just us not remembering Bastion as clearly as we should considering how good it is.

If you’re wondering, Bastion does have two control methods. One is a point-and-click kinda interface. The other is a traditional virtual button layout.

One thing you’re sure to notice as you watch us play is that this game is gorgeous. Like Enslaved, Bastion‘s post-apocalyptic world is flushed with color. The art has sort of a rustic quality to it, which really bolsters home game’s overall vibe and production elements. The soundtrack, by the way, is amazing.

If you haven’t played Bastion yet, do it. You need to. It’s a great downloadable game — it’s inventive, it’s fun, and it manages to do so much within the confines of its relatively compact framework. 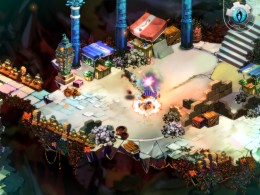 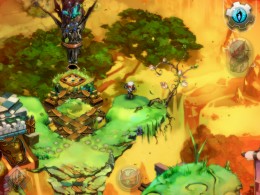 We’ll keep giving the iPad version a go, and we’ll get back to you with a full review in the near future. Stay tuned!