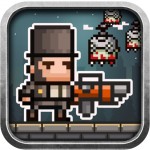 Random Heroes (Free) is the latest platformer by Ravenous Games and Woblyware, the creators of the acclaimed League of Evil ($2.99) and Burger Cat ($2.99). It looks a lot like the original League of Evil, only with more varied art, and it uses Ravenous’ refined and precise virtual controls. But the first thing you need to know about Random Heroes is that it’s not League of Evil.

The League of Evil games are precision platformers in the same general vein as Super Meat Boy. Random Heroes is more of a run and gun game, though it isn’t as packed with enemies as Contra or Metal Slug 3 ($2.99). Instead, the enemies are tough, and by tough, I mean it takes a lot of hits to take them down.

This is where the game makes an awkward compromise with IAP. There are no single-use items in Random Heroes, and you can grind until you can afford everything, but the basic zombies that are the first enemies you face take eight shots to kill with your starting weapon. It feels like the game will soon become impossible to play without more firepower. However, by the time you’ve got a rocket launcher and the “Robodude costume" (maximum damage bonus), you’ll discover that it still takes two hits to kill that same zombie. Though this maintains game balance, it feels anticlimactic. 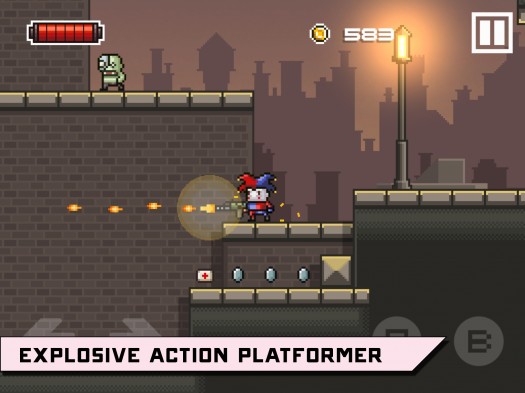 Shoot and dodge/retreat is the basic mechanic here, as the game’s pits and obstacles are fairly forgiving. You won’t have to do much outwitting either. The toughness of the cyborg zombies you’ll gun down extends to their steel-plated craniums. In most cases, if you can get behind them, they’ll keep walking away while you shoot them in the back.

The game’s flying enemies are probably its biggest challenge, as the most common ones home in on your position and hover just above your line of fire, forcing you to get to high ground or jump-shoot repeatedly to take them down. One disappointing element in Random Heroes is just how similar the weapons are. 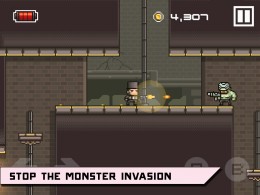 Nearly every weapon in the game fires in a straight horizontal line, with only damage per hit and rate of fire variable. This includes the flamethrower, which does not light enemies on fire, and the rocket launcher, which does not do splash damage. The shotgun is the sole exception, as it shoots bullets in a three way split.

It all looks amazing, from spent casings that fly away from your minigun to the game’s titular heroes. This is simultaneously the game’s most exciting and most disappointing element. You can play as a trucker, a cop, one of the evil scientists from League of Evil, a nun, or even Abraham Lincoln (axe not included).

Each of these costumes has health, speed, and damage modifiers, but there’s no plot – you just pay to unlock them – and no special abilities, with one exception: the jester can jump considerably higher and longer than any other character, making most of the platforming easier (and a few bits harder, as characters  always jump their maximum height). There is, however, no way to find this out in-game prior to  buying that costume.

There are even a couple of places that only the jester can get to, but it’s not a big deal, as the only hidden items in the game are small caches of coins and the occasional medkit. Something like the briefcases from League of Evil would have gone a long way towards encouraging exploration. That and dead-average level design, with sufficient challenges but very few surprises, contribute to the sense of monotony that creeps into the game.

The shotgun and the jester hint at where Random Heroes could have gone with it’s premise, something like Metal Slug meets Kid Chamelon, or maybe even a side-scrolling dual-stick shooter. As it is, it’s not a bad little platform shooter, and there is something awesome about Honest Abe toting a flamethrower, but it’s not Ravenous and Wobblyware’s best work.