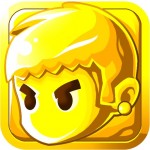 You know how so many free-to-play games get more and more frustrating the longer you play, as you find all the cool things that are locked behind paywalls and realize there was never all that much going on? Pocket Army (Free) does the opposite. It starts out grindy and dull, harasses you constantly, and has costs that seem astronomically out of reach without IAP. But play for a while and the challenge increases, the grinding starts to feel purposeful, the IAP seems less necessary and the notifications, well, they’re still extremely annoying. Otherwise, though, it just keeps getting better and better.

I didn’t see the appeal at first. The game is super simple, especially to start. You build up your tiny, adorable army. Then you take them into a level and start marching, controlling your hero while the rest control themselves. The demon army spawns on the right and walks to the left, your army spawns on the left and walks to the right. You meet in the middle, you chop them up. Repeat ad nauseum.

It takes a while before this simple mechanic gets more interesting, but it doesn’t take all that long to stab its hooks in. There are so many tiers of upgrades to work toward, levels to get through and quests to complete that the fact that you’re just repeating the same simple action kind of fades into the background. Early in the game you play the menus—the military action is just the mindless grind you go through for money and experience to keep the menu game moving. 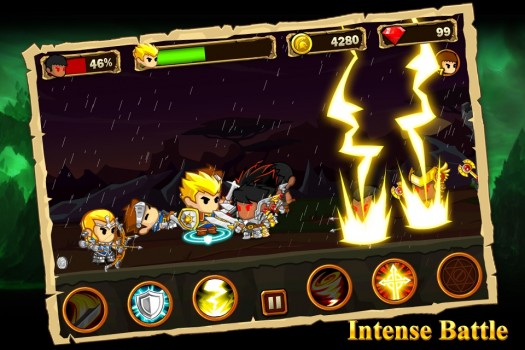 To be fair, those menus have a lot going on. First you have your troops. They come in eleven varieties of melee combatants, archers and mages. You unlock them as you level up, and build and upgrade them by pouring in obscene amounts of gold. Then there are the goods: new swords, shields, armor and rings that become available at alternating levels. Finally there are the spells. You can have six equipped on your hero at any given time, but the costs get ludicrous the further up the list you go. Between those three categories, you’ll need a constant supply of money and gems.

Hunting your way through Pocket Army’s levels gives you gold, gems and experience, and also fulfills quest conditions. There are quests that track numbers—hit this level, kill that many guys, and so on. Then there are three event quests. The first is to collect a certain number of lightning souls, which drop from level bosses on a pretty regular basis. The second is to collect dark souls. These drop from Abaddon, a powerful boss that rises to be killed every eight hours or so. 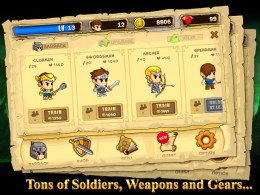 As if that weren’t enough to keep you hopping into the game regularly, the third is to hunt the Gem Felix, a blobby little monster that appears on the map regularly. Kill him enough times and he’ll join you, hanging out as your pet, increasing your gem income and fighting by your side. There are other Felixes to buy, but they cost more gems than you’re likely to collect without paying real cash.

So even before the game gets interesting there’s always one more thing to do. One more turn might get you enough gold to buy a new weapon or upgrade a troop. After that, the Gem Felix might pop up, or villagers might need help with a demon threat. Once you’ve dealt with the problem, you may be about to level up—and you just need a few thousand more gold to buy the next upgrade after that. If not, you can probably fight your friends’ armies.

The fighting itself actually gets pretty fun eventually, once both sides have a good variety of troops. You’ll generally only bring eight little dudes into battle with you—you can upgrade your army size, but it’s costly and complicated—and the enemy army grows quickly. Once it has upgraded archers and spearmen you’ll need to start playing with positioning, running around and casting spells, and trying desperately to keep the enemies off your guys without dying yourself.

It takes a long time to reach this point, though, so you’re going to have to love a good grind. And while there’s a lot to do, it’s not exactly the cleanest, best thought-out game to bear that grind. There’s the demon army of red-eyed but otherwise normal looking brown-skinned people, versus your holy, pale-skinned army. There are phrases like “in our world, there is another sacred Felix is the one called the Gem Felix." There is the half-naked woman on the loading screen of a game starring chibi soldiers. It’s odd, thoughtless stuff that makes the experience more awkward than it has to be. Also worth noting—players in our discussion thread have mentioned running into serious data loss bugs. Players beware.

Pocket Army isn’t a game I’d recommend to someone looking for a deep, interesting strategy title. But if you someone who’s comfortable investing hours into a grind for a treadmill of upgrades and a game that, while shallow, gets more interesting the more time you put in, then you should probably get started. The forces of evil await, my friend, and that treadmill ain’t going to walk itself.