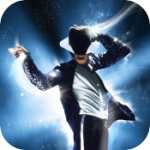 iPad users have had the pleasure of checking out Michael Jackson: The Experience ($0.99) for a few months, but it wasn’t until last week that iPhone/touch users were finally able to jam with the King of Pop. Now that both versions are available, we thought we’d see how it plays out on iOS. Unfortunately, the excellent presentation and fan service that it offers aren’t enough to overcome a variety of issues concerning controls, song selection and visuals.

If you’ve never played one of the many iterations of Michael Jackson: The Experience, you’re in for a treat from a fan service perspective. Songs take place in environments from their music videos, with backup dancers and scene changes as appropriate. Cutscenes and familiar choreography set the stage and do a great job helping you remember the time of classic (and dare I say, better) music videos. You can also change Michael’s costumes between songs (for a price), adding to the nostalgia. There’s a lot here in terms of presentation and production values. Unfortunately, the game goes downhill from there. 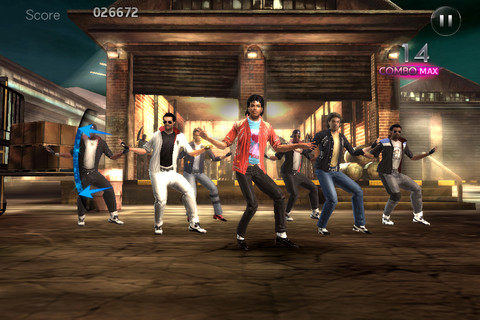 Being based off the Vita version of Experience, you’d expect this iOS port to have decent visuals and to a certain extent you’d be correct. The game looks nice enough, but behind the mask you’ll find stunted (and repetitive) movement. In addition, I encountered slowdown spikes at random intervals during some song runs, which can be really dangerous and mess up timing (particularly in a rhythm game). Still, outside the slowdown the visuals work well enough for a rhythm game, until you get to the controls.

Experience’s gameplay centers on swipes and taps that must be done to the beat of the music. Prompts will appear on the screen indicating the direction and timing of the move, with two indicators slowly coming together until they merge (indicating the right time to swipe/tap). Harder difficulty levels add in curve and circle-swipes, as well as moves requiring both hands.

There are several issues with the rhythm controls in Experience. First, the timing mechanism just feels off. There are not enough visual cues to really differentiate between a ‘Perfect’ and a ‘Great,’ leaving you guessing a lot. In addition, there aren’t any auditory cues if you miss notes. Finally, while I understand hard difficulties are supposed to be, well, difficult, but Experience’s difficulty seems to stem more from a confusing mess of control prompts rather than actual difficulty. Other silly issues, such as the inability to see which difficulties you’ve beaten, and the lack of a song progress meter, keep the game behind the curve.

One area that is really disappointing in Experience is the song selection. For the price of the game you get four full songs to play, with 9 others available as IAP (separate purchases, no packs). Strangely enough, the IAP selection seems to vary between the iPhone version and the iPad version. For example, Thriller is available as IAP for iPad, while it’s not for iPhone (which makes no sense to me). I’m not sure of the reason for this fragmentation (besides monetary reasons), but I don’t like it. Adding insult to injury is the fact that all the IAP is pre-downloaded, with purchases simply “unlocking” the songs vice downloading. Maybe it doesn’t make much of a difference but it just feels wrong.

Unfortunately, offering a recommendation for Experience isn’t as black or white as one would hope. The imprecise controls, and surprisingly small song selection hold the game back. Of course, that’s not to say that the game is necessarily bad – it just isn’t as good as the better iOS rhythm titles. Regardless, if you’re a fan of Jackson songs and you’re willing to put up with the above issues, you can do a lot worse than Michael Jackson: The Experience. Just don’t expect much more than the fan service if you get it.