A big game of Civ V can take days. A skirmish in StarCraft 2 can take hours, if you’re terrible at the game. Heck, you could even blow about 30 minutes in a Crimson Pirates level on iPad. Whether on PC or mobile, strategy games soak up time. This is why the novelty of Little Conquest is tickling us so much. It’s an RTS where the matches take minutes and you can accomplish any sort of micro-goal you set for yourself within seconds. This thing moves, man, while also delivering the same sort of pop you get from a traditional strategy game.

It’s breezy because it keeps its mechanics, goals, and rules simple. Every level, every competitive match boils down to this: capture all the bases. You do this with taps and swipes that summon troops from one building and into the another. If you put more dudes than there are enemy dudes into a building, it’s yours. 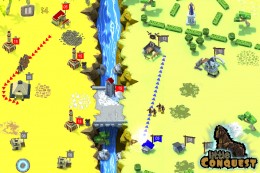 Buildings build different things. The barracks, for example, continuously spawns everyday grunts. Stables spawn calvary, which are tougher and move much quicker than grunts. You can also take over special troop buildings, which spawn, say, minotaurs. Or massive war machines like Trojan Horses that can tear down an enemy fast.

There’s also other elements at play, most notably an in-game economy. Take over a farm and you’ll generate gold at a steady clip. With that gold, you can upgrade the buildings you’ve taken over and make them spawn guys quicker and hold more dudes.

The strategy of the game is in how you commit your resources. Overextend and send too many soldiers out in different directions, and an opponent can rush in and rip you apart. Spending too much on a single area can have the same effect: your barracks might be full of dudes, but you stack that building at the risk of leaving your stable barren. 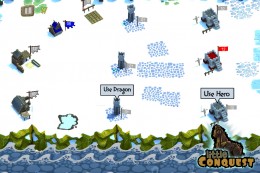 In practice, the experience is lightning fast. You’re sending people all over the place, tapping frantically on buildings to send your soldiers into enemy territory while he is doing the same thing. In the process of just minutes, you construct an entire base full of traditional RTS buildings, an army of upgraded soldiers, and form complex weaves of attacks and focused defensive pushes.

The end result is that you get a good amount of the engagement, strategic wizardry, and fulfillment that you could from a blown-up strategy game in a quarter of the time.

We talked with creator Battlebit Games’ Rodrigo Ruiz about the pacing of Little Conquest. Ruiz says he just wanted to keep users involved at all times.

“Well, to be honest we designed the game with one goal in mind: Keep the player busy during the match. At all times you should be doing something and not just watching the game go by," Ruiz tells us. 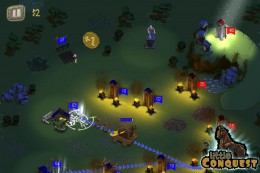 “We included all other elements to have richer interactions and to have more options to keep the player busy," he explains. “While we enjoy turn-based and other strategy game genres we confess we have a very shot attention span, so a game you can pick and spend 3-10 minutes and still get to exercise your strategy muscle — that’s appealing to us."

Little Conquest sports a lengthy campaign that we bit into during our hour-long session with a demo, cherry picking levels that caught our eye. Like a solid strategy game, each mission seems to stretch the mechanics and introduce new ways to interact with the game.

One level, for instance, has you piling your dudes into a super building of sorts, which sits flat in the middle of a level. Taking it gives you an enormous bump against the AI, losing it spells trouble. Another level has you taking over a series turrets in order to stop a stream of Trojan Horses. Another level introduces dragons, while another emphasizes upgrading. 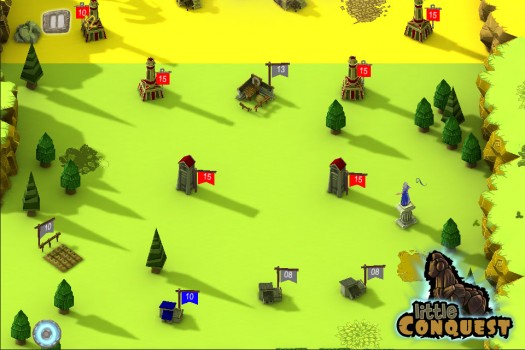 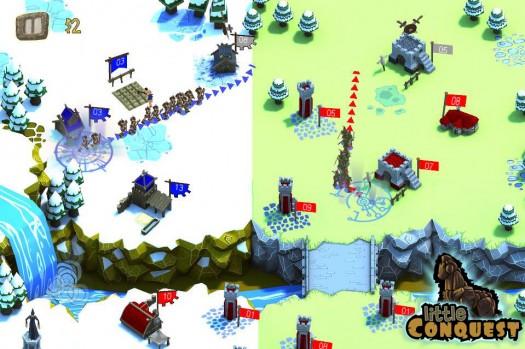 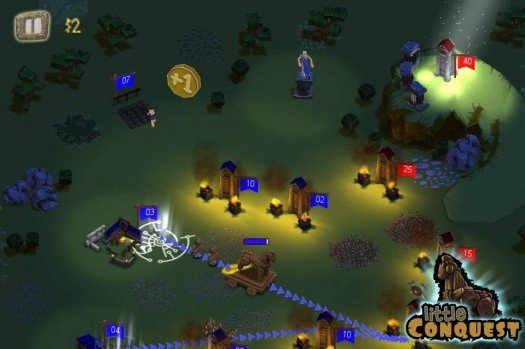 We didn’t get to check out the online component, but will on release.

Little Conquest is aware of its coolest feature — it actively tries to deliver one of the fastest RTS experiences possible, while still delivering somewhat traditional play. It’s a curious mixture, and one that has wanting to see a lot more.

Little Conquest is due out “soon" across iPad and iPhone. We’ve got some video pictures to go alongside these word pictures, if you’re in the mood.