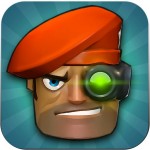 With the release of one long-awaited tower defense game out of the way, it seems as if other developers are now stepping up to the plate, looking to ride the proverbial wave of increased interest in the classic iOS genre. Commando Jack (Free), from the folks at Colossal Games and Chillingo, is one such tower defense. However, while the majority of Commando Jack follows the general themes of tower defense rather closely, its ability to jump into the action first-person style does a good job of differentiating the game from the rest.

At first glance, Commando Jack plays like any other open field tower defense title. Players are given an enemy entrance as well as a base to guard (in this case, it’s Commando Jack himself) at the onset of each mission. Enemies are then set forth in waves seeking the most direct route to the commando. Players then utilize a combination of familiar looking towers (such as the mini gun, goop gun and laser) to serve as the line of defense between the baddies and the base. As this is an open field title, towers also serve as barriers and are best used to carve long and windy paths throughout the map for an effective defense. So far, Commando Jack sounds like a generic addition to the tower defense world. 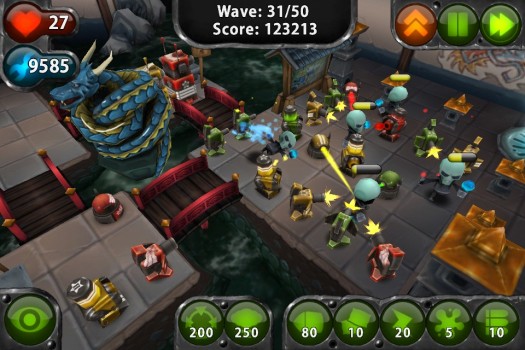 Once you activate first-person mode, however, Commando Jack goes a long way towards adding its own mark to the TD formula. The commando himself comes armed with a machine gun (with others available via unlocks), and at the tap of a button you can take control of him and aim down his sights. While Commando Jack isn’t the first TD game to offer a first-person mode, it’s one of the few to make it interesting. Enemies come with weak points that take more damage if you aim in the right spots. In addition there are enemies that absolutely require you to take advantage of the first-person mode, making it a required feature rather than a nice option. It’s also always fun to see how your towers look from a different perspective. 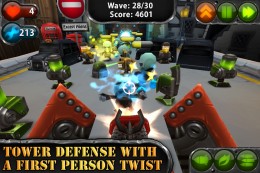 Other nice touches in Commando Jack include a difficulty system that goes beyond just making enemies harder by also incorporating barriers and other obstacles throughout the map that force you to change paths in both tower placement and first person aiming. For that matter, I also liked the fact that each difficulty actually had distinguishable jumps and felt as if each difficulty was tested and tuned. Another decent feature is the included shop advancement system which never felt overtly restrictive and does a decent job of extending replayability beyond the game’s five maps.

Speaking of maps, one of my biggest complaints with Commando Jack is the very limited selection of levels. The small selection really isn’t enough to carry a game, despite the shop system mentioned above. In addition, while most of the things to purchase don’t take much in terms of saving up, some of the better upgrades (i.e. a whole new difficulty system) cost way too much and seem to push players more towards gold IAP, which is a shame. There’s also not much to say for the visual system, which uses simple 3D models and environments and felt a bit lackluster.