I’ve been on the same map in Fieldrunners 2 ($2.99) for half the day and it’s driving me up the wall. Like a textual Yoda, the in-game help keeps telling me the same thing, “Use the choke points.” I do but keep failing. When I attempt to save up for lasers, I find myself getting overrun. When I trust in bargain-bin Gatling guns, I find myself getting exactly what I paid for. The happy medium exists somewhere. I know it. I just need to figure out how to get it.

There is no delicate way to put it. Subatomic Studios‘ Fieldrunners 2, the sequel to their hit tower defense game, will eat your soul and have you thanking it for the privilege. Filled with all the things that made its predecessor such a hit with its fans, Fieldrunners 2 is the embodiment of the phrase ‘if it ain’t broke, don’t fix it’. You won’t find unnecessary innovation here, no awkward attempt to blend genres – Fieldrunners 2 knows what it is. It’s a tower defense game and a bloody good one at that. 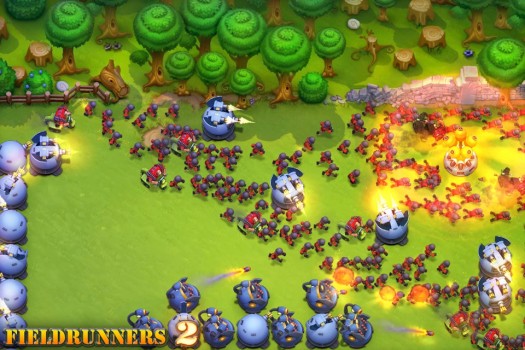 The controls are what you would expect of many tower defense games. To place a tower, you simply drag and drop it onto the desired location on the screen. If you want to do anything else, such as upgrade one of your many death-dealing facilities or make use of one of the game’s many power-ups, you simply need to tap it.

While the control scheme is simple enough, the gameplay is something else entirely. I’m going to risk sounding inappropriately cheesy and tell you that there’s something for everyone in Fieldrunners 2. Spread over twenty-five levels is a collection of almost every game mode known to the genre. 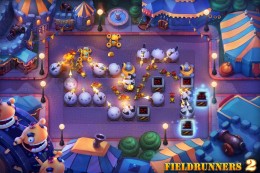 Enjoy mazing? There will be levels that will call upon your expertise at building plasma-shooting labyrinths of doom. Delight in the idea of a Sudden Death mode? Be prepared to put your money where your mouth is; Sudden Death is not an uncommon sight in Fieldrunners 2. Need to simply indulge in a traditional tower defense game? Survival Mode has you covered. Though possibly overwhelming for the tower defense greenhorn, hardcore enthusiasts will have an absolute ball here.

If the large array of game modes wasn’t enough for you, there are a whole lot more towers this time around for you to mix and match. Additionally, Fieldrunners 2 also boasts of an assortment of power-ups, such as something that can rewind time and an all-out aerial bombardment, that can be used to make life a little more manageable.

Of course, it also helps that Fieldrunners 2 is absolutely stunning, an audiovisual treat made all the better by the fact that it supports Retina Display. The graphics are crisp, clear and outfitted with a lavish attention to detail – you even get little bluebirds fluttering across the world map. The music is great as well. However, morbid as this might sound, what I really like are the sounds that the little clone-soldiers make whenever they’re turned into a charred, smoldering patch on the ground.

What really makes Fieldrunners 2 work, however, is not the souped-up aesthetics or the bigger roster of towers. No, sir. It’s the little things that make Fieldrunners 2 shine so bright. Here, unlike in its predecessor, the enemies are just a tad bit smarter. They know how to space out. They know how to make your life hard. When you hit pause in frustration, you’ll get to see dotted lines that illustrate the paths that they will take. Most importantly of all, while commonplace within the App Store, Fieldrunners 2 is wonderfully free of IAPs. For its current price of entry, you’ll get it all.

But, yes. Long story short, you probably should have bought Fieldrunners 2 the moment that it hit the App Store. It’s good. It may not be as revolutionary as its progenitor but it’s certainly capable of standing shoulder-to-shoulder with the tower defense heavyweights in the App Store. SubAtomic Studios definitely have not lost their touch. Now, go buy it.