We’re no strangers to Radiangames’ impressive repertoire of dual stick shooters (Inferno+ anyone?). However, when we recently previewed Slydris ($1.99), we noted the developer’s deliberate decision to make a puzzle title that focused more on reflective precision rather than the frenetic gameplay we’ve come to associate with previous titles. After putting Slydris through its paces, it’s easy to see that the overall pacing and presentation lends itself well to what is a well-done block puzzler.

Long-time puzzle veterans will immediately see similarities between Slydris and other line clearing titles. Slydris charges you with sliding blocks of various sizes horizontally across the screen in order to create complete lines. Once a line is complete, it disappears, leaving the other blocks to fall where they may.
Meanwhile, blocks fall from above in random sizes and formations, forcing you to take said blocks into consideration whenever you’re trying to clear a line. From a generalized viewpoint, the endgoal of Slydris doesn’t seem to differ from tons of other puzzlers on the market. However, as with most games in the genre it’s the differences that make a big difference. 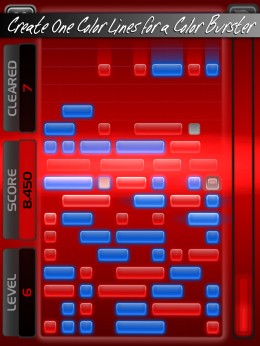 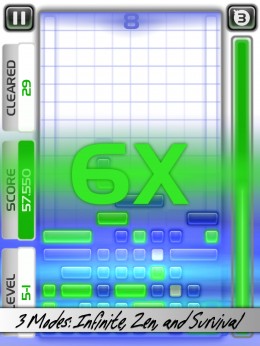 For starters, players can’t control the directions or drop-speed of the blocks that fall above – when the blocks fall, they fall. In addition, Slydris features a number of special blocks that range from the ‘Locked’ metal block (which can’t be moved) to the ‘Magnet’ (which stays at the same height even if there are no blocks beneath it). Slydris also includes a color buster bonus which breaks all the blocks into smaller pieces (easier to deal with), along with a bomb ability which takes out three rows of blocks to round out the differences. I felt each of these features went a long way towards differentiating Slydris from other titles, and were perfect complements to the game’s mechanics.

Slydris offers three separate play modes based on the core gameplay described above. The first two, Infinite and Zen, play on the game’s persistent theme of relaxation and caution. Infinite serves as the main mode, which has you clearing lines in a situation where each move causes a variety of blocks to fall from above. The ideal goal is to preplan and outsmart the falling blocks, clearing more lines as blocks fall until the game eventually ends when blocks end up above the top of the screen. The mode rewards players that take every move into consideration, which works very well for the patient gamer.

Zen works in a similar fashion, but the game never ends, leaving you to simply clear blocks for as long as you like. All modes come complete with great mood-setting music that really enhances the gaming experience. For that matter, I thought the color palettes and menus all shared a similar vibe that goes great with the overall theme.

Of course, Slydris isn’t all about slow and thoughtful gameplay. The game’s Survival mode adds a bit of speed to the game by challenging players to clear as many lines as possible with a limited amount of time. Once the timer is up, the game throws a few sets of random blocks, and then starts another timer in which you try to clear the newly created mess until you eventually succumb. While I enjoyed Infinity and Zen modes, I thought Survival was the hidden gem within Slydris, as the gameplay works very well in this quickened setting.

Whether you thoroughly enjoy Slydris will depend on how much you enjoy the game’s pacing and minimalistic presentation. iPad Gamers that embrace the style will easily find Slydris to be an excellent block puzzler with very little to complain about. Genre novices should also enjoy the game as its highly approachable gameplay and inviting feel is universally appealing. If you’re looking for a new puzzle title to relax and kill time with, look no further.