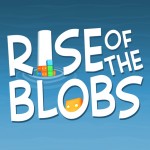 Wind-Up Knight (Free) was easily one of my favorite games of 2011, but I have to admit that it’s a niche title. There is an audience for brutal precision platformers, but it’s not exactly the broadest audience. Robot Invader’s upcoming Rise of the Blobs, on the other hand, should be more of a crowd pleaser. It’s cute, it’s accessible, it’s free—but underneath its bubbly exterior lies the same killer instinct that made Wind-Up Knight such a delight.

Here’s the scoop. Rise of the Blobs is a puzzle game played in a 3D environment. A tower rises up, and around it are many colored blobby cubes with blank, staring eyes. Your marshmallow buddy and guide to this game of blobs is Mal, and he sits perched atop the tower with a pile of fruit that he tosses down at set intervals—more than a little bit Tetris-style.

The blobs love fruit, and absorb it into their tubby little bodies. This leaves them open to explosion, which is how you pull off all the typical things you find in matching puzzles. You can pop fruit-filled blobs into chains or combos, match certain shapes for bonuses, and earn yourself a few coins in the process. All the while, the blobs are rising up toward their tasty, marshmallow dessert. You may also be fighting to beat a timer, or to clear away blobs within a set number of turns. Any way you play, though, failure gets messy. 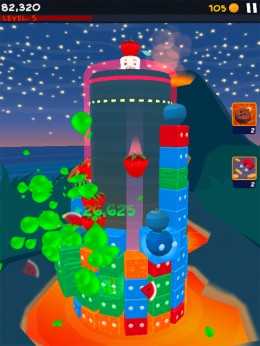 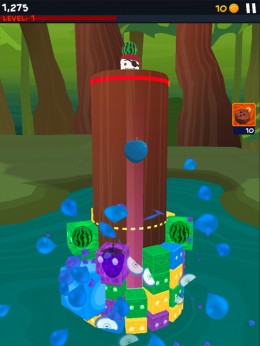 Since the blobs are wrapped all the way around the tower, you constantly have to keep two things in mind: what you can see, and what you can’t. As the blobs climb closer and closer to their grim goal, it becomes a game of franticly swiping around and around to find the spot where the next fruit will best fit. The game will be balanced so both casual players and serious high-score seekers will be able to have fun and make progress, but don’t expect Tetris-style 40 minute marathons if you’re skilled. The difficulty curve is steep, and the games are kept intentionally brief.

So why did Robot Invader go from the dark and dastardly platformer we know and love to a cute and cuddly matching puzzle whose fangs are kept well-hidden?

Part of the reason was to challenge itself. Rise of the Blobs is, in a lot of ways, a 180 from Wind-Up Knight, and in speaking to Robot Invader I learned that the about-face was completely intentional. The studio has no interest in pigeonholing itself as the guys who make incredibly difficult platformers, even if that’s something they’re particularly skilled at. So they abandoned the genre, the level structure, the monetization scheme and pretty much everything else in order to rise to something new. 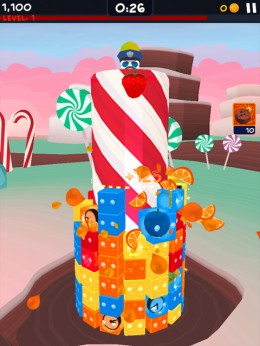 Thanks to digital game marketplaces, we’ve entered a something of post-scarcity world of gaming. Anyone with a modern mobile device has enough entertainment at his or her fingertips to stay occupied indefinitely. So how, as a developer, do you stand out? According to Robot Invader’s Chris Pruett, you experiment. In such a young marketplace, everyone has to struggle to find the right games to make, the right ways to market them. Get complacent and you’re likely to be left behind.

One of those experiments is finding the right free-to-play balance. Rise of the Blobs, as it currently stands, is playable (and thoroughly enjoyable), without any additional content. There’s no magic trick that will make an iOS game succcessful, but this model eliminates many of the obstacles between the studio and the wide audience it hopes to continue to build.

The audience of Rise of the Blobs is likely to be wide and varied. Some players will want to challenge themselves against their friends and strangers, and the game is well-suited to that. The short sessions mean every fruit drop counts, and a complex progression system means plateauing should rarely become a problem. But the game is equally playable by those who just want to work through the unlockable content, dress Mal up in his trademark Malwear, and have some good, clean, matching fun. I’ve approached it both ways in the early build I’ve played, and it’s a blast either way.

Robot Invader isn’t ready to announce a release date, but the game’s development is progressing rapidly. With each update we see, Rise of the Blobs becomes slicker, sexier and better balanced. Whenever it arrives, it will hit iOS and Android, and be playable on iPad and iPhone alike. We’ll keep an ear to the ground and let you know when that will be just as soon as we have the details ourselves.