Spoiler alert! We had this review in queue before the game went free as part of Apple’s App of the Week promotion. So, this post is serving double duty as both a freebie alert as well as an actual review, in case you needed something else to be pushed over the edge of just mashing this link and hitting “Download."

Owning a catapult seems fun. The idea of launching stuff out of it seems more fun, though. Perhaps cannonballs, or cows, or perhaps even your own body, if you’re feeling particularly adventurous.

Of course, you could also fall down a hill and die an incredibly painful death, but no one ever thinks about that when they consider notching themselves in and flying through the air. That’s why it’s a lot easier to play with one in a video game than it is to actually wheel one out in real life and use it to launch … well, whatever you’re planning on launching.

Catapult King ($0.99) goes with that idea, employing a Dreamworks-esque look and nicely buffed graphics to make a game that’s pretty darn fun to play. It’s a really simple concept: you have a big old wooden catapult, and you’re out in a pretty green field with lots of mooing cows. 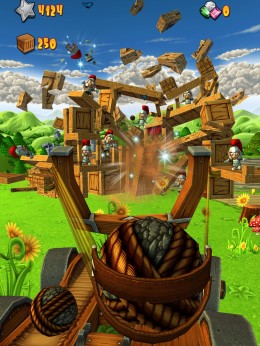 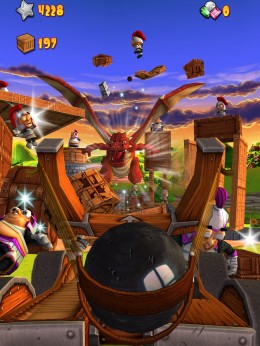 In the distance, you’ll see some towers built out of planks and boxes, and on the towers you’ll see a bunch of goofy knights taunting you by making some really weird sounds. I think that they think they are some sort of lost birds of the wild. At any rate your goal is to use three boulders to knock the everliving crap out of them, and boy, is it fun to do.

The premise is basic – think Angry Birds in first-person –  but there’s something that’s really pleasing about nailing the shot and making the whole structure the knights are on tumble, not to mention the unspeakable pleasure of actually hitting one of them and sending them flying. It’s great to watch physics do its job.

As you finish levels, you’ll earn magic you can use later. “Earth Shock" and “Aim Arrow" come in pretty handy as you progress. The latter is a great tool to use when you are trying to get a feel as the game progresses and messes with your depth perception, as it allows you to use a guide to see where your shots are going to go.

The levels will progress in difficulty as you make headway. There will be times when the knights are hidden from view, so you’ll have to be more clever about how you knock down the structure. Of course, you can replay levels at any time if you want to get a better score. The fewer boulders you need to take out all the knights, the better your score. You can also earn ratings in crowns too, although I admit I never did manage a gold crown (not sure how much of a badass you have to be to get that).

With 64 levels to play and more promised on the way, Catapult King really does give you a lot to do. And that’s before you mention the dragon fights that come later down the line. Wait, did I mention those?