Playdek’s latest iOS conversion of a tabletop game is its most ambitious, and arguably its most successful to date. Summoner Wars (Free) is a hybrid CCG / small map strategy game somewhat similar to Mojang’s highly-anticipated Scrolls. This combination of deck-building in the vein pioneered by Magic 2013 (Free) with tactical maneuvering of the sort seen in Hero Academy (Free) and Outwitters (Free) is a powerful combination for gamers who are fans of both genres.

Summoner Wars is technically free-to-play, but the FTP content is basically a demo, disabling online play, and only allowing the player to play the Phoenix Elves against the computer (who only plays the Tundra Orcs).

The IAP is modeled on that of Plaid Hat’s card game, with each faction having a “base" deck and an expansion set, available for 99¢ each. One IAP unlocks all four AI decks, deck construction, and asynchronous online play. Alternatively, one can buy the combo pack for all 8 factions for $7.99 (half price). 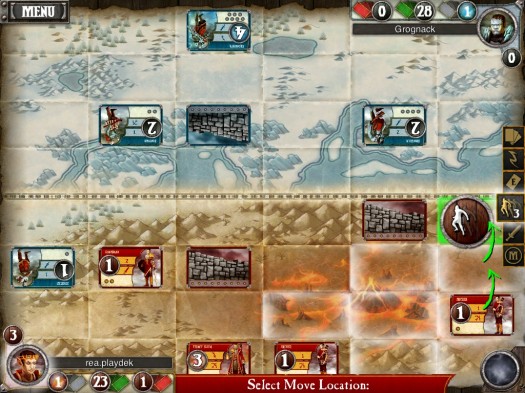 This is an appealing model for IAP, allowing players who want to get into the game to just spend a buck or two, while those who are serious can spend the more hefty eight dollars and get a lot of game for it. This is basically the “living card game" model (fixed, non-random expansions), though that phrase is a Fantasy Fight Games trademark, so you won’t see anyone else using it.

The eight factions available (nine, if you count the Mercenaries) represent about half of those available for the tabletop game – so if you’re already a Summoner Wars fan and you want to play the Filth, Shadow Elves, or Sand Goblins, you’ll have to wait a bit. Also worth noting is that the $7.99 combo pack covers only all present decks, not future expansions. 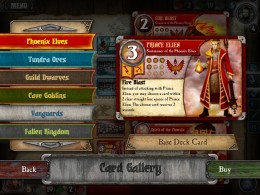 The game’s deck-building mechanic works really well, with 3 champion and 18 common (non-unique unit) slots per deck. You can’t customize how many or which Event cards go into a deck. As “Events" includes all of the games more spell-like effects (Sorceries and Instants, in Magic’s terms), this is something of a disappointment, but it helps promote game balance and means that each match is won based on battlefield tactics with good deck design an edge but never a “lock."

Each faction plays differently, and while the feel is classically high fantasy, Plaid Hat went to some effort to give each faction a unique feel. The Guild Dwarves are stalwart and the Cave Goblins use swarm tactics, but the achieve those “typical" traits with unusual abilities, like preventing adjacent enemy units from moving or getting free attacks.

The game’s AI is pretty good, thought the asynchronous multiplayer is where the game really shines. That is also where one of the game’s flaws appears: there’s no chat feature. It seems like nearly every iOS game has something quirky in its multiplayer mode, but this is a fairly major omission.

The game’s other flaws are mainly due to the decision to make it a Universal, rather than iPad only title (like Magic 2013). On an iPhone or iPod touch, the card text is small even zoomed-in, and when viewing the full map, the card art is barely large enough to discern between cards. You can zoom in and show only part of the map, but it’s hard to play zoomed in. The game doesn’t auto-track to where the action is, so if one of your units is attacked, you have to either zoom back out or pan around to find out where it is.

This combines to make Summoner Wars a must-have for gamers who want more tactical maneuvering in their CCGs or more customization in their strategy games. However, its flaws and the price point for full buy-in mean that it’s not for everyone, but being free to try and having a flexible IAP system means that it’s worth checking out either way.