Tapulous returns to the iOS music scene once again with Tap Tap Revenge Tour (Free), the latest in a string of Tap Tap Revenge games that stretch all the way back to before the App Store even existed. While Tour offers the same basic gameplay with new tracks (as well as a decent backlog of free and premium songs in its store), not much else has been improved upon or changed, save for the addition of a new freemium-based mode.

For those unfamiliar with the series, Tap Tap Revenge is a rhythm game that follows in the footsteps of Dance Dance Revolution with players tapping notes along three lanes to the tune of whatever is playing. Tour does do a lot to shake up the basic formula as taps, holds, swipes, and shake moves all return with little in terms of actual changes.

Where Tour looks to mix things up a bit is with the inclusion of its (aptly named) Tour Mode. Every day, the Tap Tap servers pick a location in the world to perform a total of five (three plus two encore) songs. Songs can be played on any difficulty, and each venue gets progressively harder, imposing a limit on how many notes you can cumulatively miss for the song. Every location has a set amount of free (and DLC) songs that can be played from, which can be annoying when it turns out a premium song you paid for in the music store isn’t available for the day’s location. 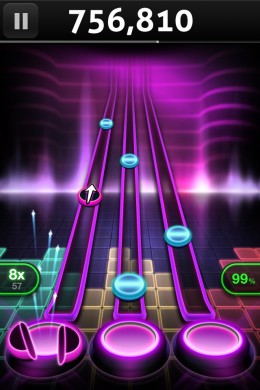 Passing songs awards Notes (which can be used to buy superficial items for your ‘wall’) and experience, with additional rewards of Notes and random items should you pass all the songs at a particular location. Once you complete the last song, Tour mode ends until the next day, when a new location is picked. It’s nice to see some sort of overarching story mode worked into the Tap Tap universe and it certainly succeeds in giving players something to come back for. Unfortunately, the game’s freemium aspects hold back the full potential of Tour Mode.

It’s bad enough that players can only participate in one location every 24 hours, but in addition to that, songs played at a location in Tour mode requires guitar picks (an in-game currency) to play. You start out with a small amount when you first launch the game, and can earn additional picks with level-ups, as well as with a daily rationing for simply logging in. The problem is after a few days of playing, you’ll quickly realize that the daily bonus and level-up rewards aren’t nearly enough to keep you playing (and completing) locations on a day-to-day basis.

Thus, players end up resorting to either straight purchasing of picks via IAP, saving up daily bonuses (and missing some daily locations in the meanwhile) or earning picks via purchasing paid songs. I’m glad that Tour offers picks with song purchases as anyone looking to invest some time in Tour will most likely want to pick up additional songs as soon as possible anyway to supplement the small offering that come with the game (the music store actually features a decent catalog across various genres). Still, the pick bonus is not really enough to keep your inventory full, unless you plan on buying quite a few song packs.

When playing previous Tap Tap Revenge games, I’ve always had issues with tap feedback as well as the occasional slowdown and jittering (making note paths seem not as smooth). Unfortunately, Tour doesn’t seem to do much to alleviate those concerns. Even on an iPhone 4S, I’ve had occasional bouts of stages hitting lag spikes that they never fully recover from, making it a bit harder to pinpoint timing. As for note/tap feedback, some of Tour’s stages do a decent job of visually letting you know when you (and how well you) hit notes, but other stages are filled with too many distractions and not enough cues to help you get the timing down. There’s also still a lack of auditory indications when you miss notes, something that’s common in the series.

As more and more games (and genres) look towards freemium experimentation and implementation, it’s not a big surprise that we’d find the Tap Tap series going along that path too. For its credit, players can play songs in the game’s freeplay ‘Jam’ mode as much as they want without needing to buy into any freemium mechanics. However, for folks looking to compete and succeed in the game’s Tour mode, investment of more than just time will be required.