If you’ve ever owned a pair of fuzzy Cthulhu slippers or hoped to be “eaten first," this game’s for you. Cthulhu Saves the World ($1.99) is a campy, crazy romp through twisted “cutethulhu" Lovecraftiana, perverted, unnatural RPG cliches, and a boatload of geek-culture references.

The game looks like a 16-bit JRPG, but it has an original combat system, first showcased in Zeboyd Games’ Breath of Death VII and intended to make battles short but intense, as well as a branching level-up system that gives a lot of potential for customization, and different gameplay modes to increase replayability.

Zeboyd is also the creator of Penny Arcade: On the Rain-Slick Precipice of Darkness – Episode 3, coming to iOS as soon as TinkerHouse Games can complete the port – hopefully with attention to the technical issues with Cthulhu, which we’ll get to. 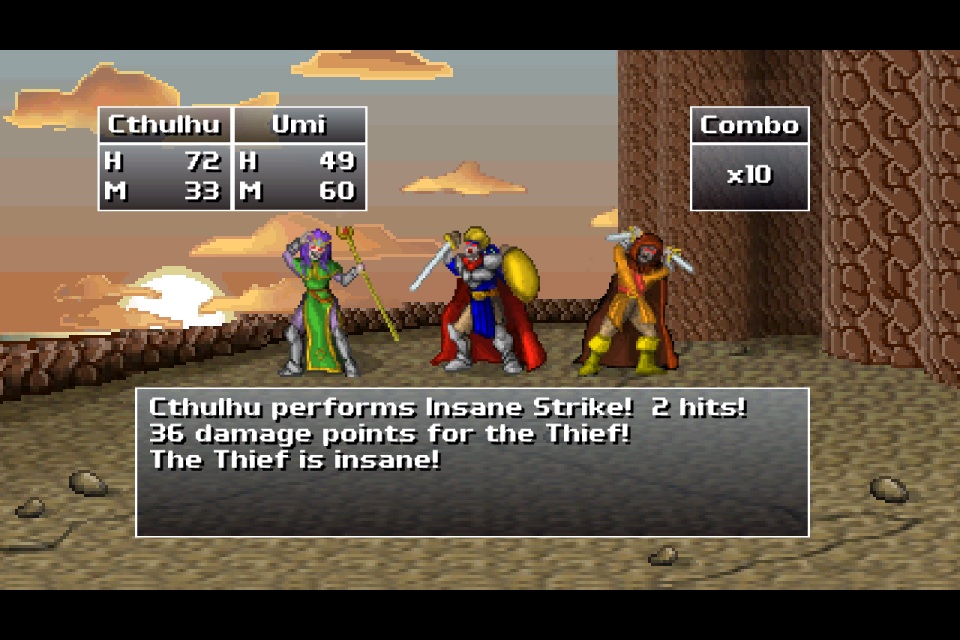 The tone of the game is set from the beginning: R’lyeh rises, and Cthulhu awakes. Some ridiculously overpowered do-gooder seals Cthulhu’s power with a spell, and he washes ashore, diminished to human stature and much less insanity-inspiring than usual. By eavesdropping on the game’s narrator, Cthulhu discovers that the only way to break the spell is by becoming a true hero, and so begins a strange quest to Arkham, Dunwich, and Innsmouth, accompanied by stranger companions, including the undead and a cat from outer space.

The titular anti-hero of Cthulhu is sarcastic, narcissistic, bossy, and utterly captivating in a vein somewhere between John Cleese as Basil Fawlty, and Meryl Streep’s role as Miranda Priestly in The Devil Wears Prada. We like him for the same reasons we like Basil and Miranda: he’s over-the-top, funny, and he really cares about his job. Cthulhu takes an almost childlike glee in spreading insanity. This alone makes him more interesting as a character than 90% of videogame RPG protagonists. 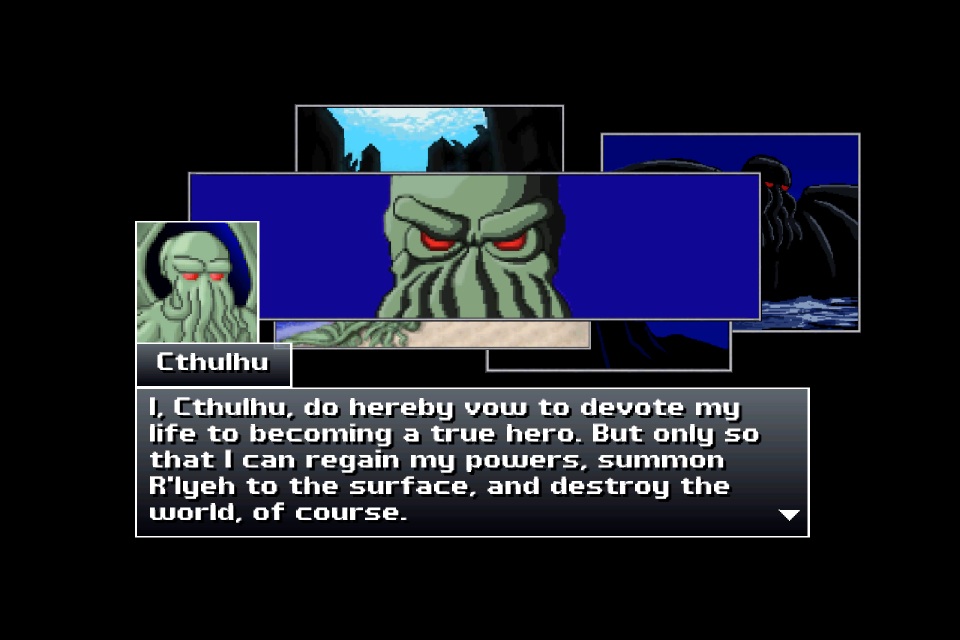 Cthulhu’s system is old school RPG-inspired, but with a number of original twists: HP is completely regenerated after combat, but your foes hit hard and  gain a bonus to damage every round, so a simple random encounter can turn dangerous rather quickly. You regain a little MP after every fight, more if you end the battle quickly, but ending battles quickly generally means spending a lot of MP (depending on the game’s difficulty setting).

Managing MP means that using spells and special abilities is normal, but requires care: depend too much on any one character and they’ll run dry. The game also caps random encounters: after 25 random battles, you’ll be left alone unless you choose to pick a fight (this is a menu option).

Each character has two options at each level up, and many of the choices are hard. Your level-up decision is whether Cthulhu receives a boost to his strength or magical power as you drive your foes (in a given fight) insane. This decision impacts both what choices you may want to make and some of the options you are presented with later on.

Let’s talk about insanity. Some attacks automatically (no resistance, even for bosses) drive your enemies out of their minds. Insane foes do more damage but also take a lot more damage, but some of them gain powerful special attacks while insane. Every monster (and hero) you fight has a regular combat image and a twisted, sometimes silly, “crazy face."

Cthulhu Saves the World is full of references to other games, comics, manga, movies, etc. This is mostly done unintrusively: if you’re not familiar with Junji Ito’s Uzumaki or you don’t find the insane Crab art reminiscent of the crabs from the original Mario Brothers, no big deal. On the other hand, the more Lovecraft you know, the better. 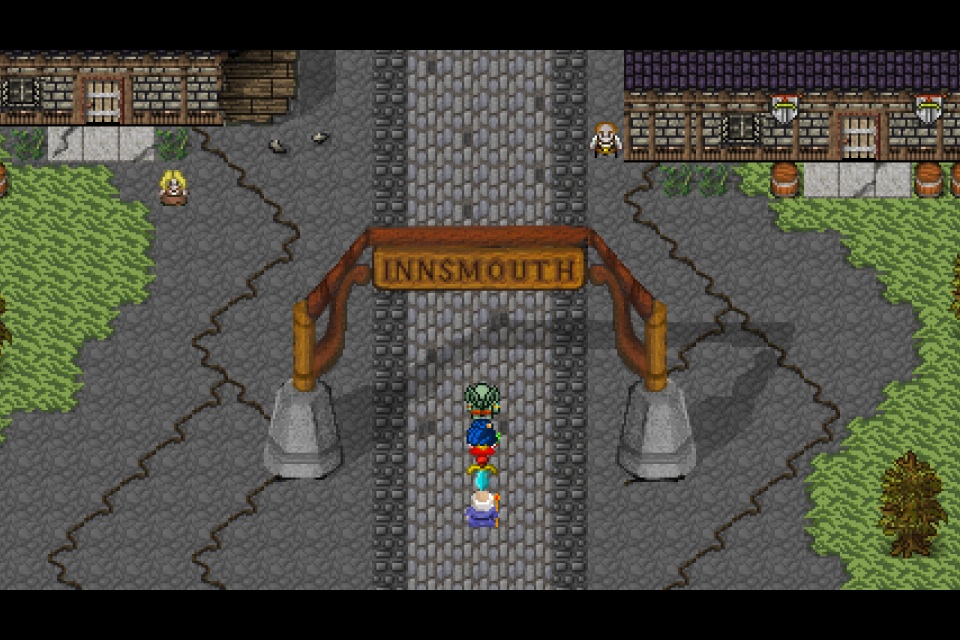 The game also has a surprising degree of replayability for a linear RPG, with a range of extra modes and options, including a commentary track, “Highlander" mode, where you can only take one character at a time into battle, and “Cthulhu’s Angels" mode, a complete remix of the game with a different script and additional characters.

Cthulhu could have been and may yet be one of the best RPGs to defile the App Store with its hideous presence, but the port is flawed. The number-one complaint on the forum is the decision to go with a swipe-to-move mechanic without the option for a d-pad. This was a bold but premature move by TinkerHouse Games, surely meant to keep the interface uncluttered and compensate for the small size of the game menu.

That’s the second problem: the game’s menus and text are all to scale from the X-Box and PC versions. This works fine on the iPad, but is very small on the iPhone and iPod Touch. For most players, this means holding the device closer than usual, and a few have found the game text literally unreadable. 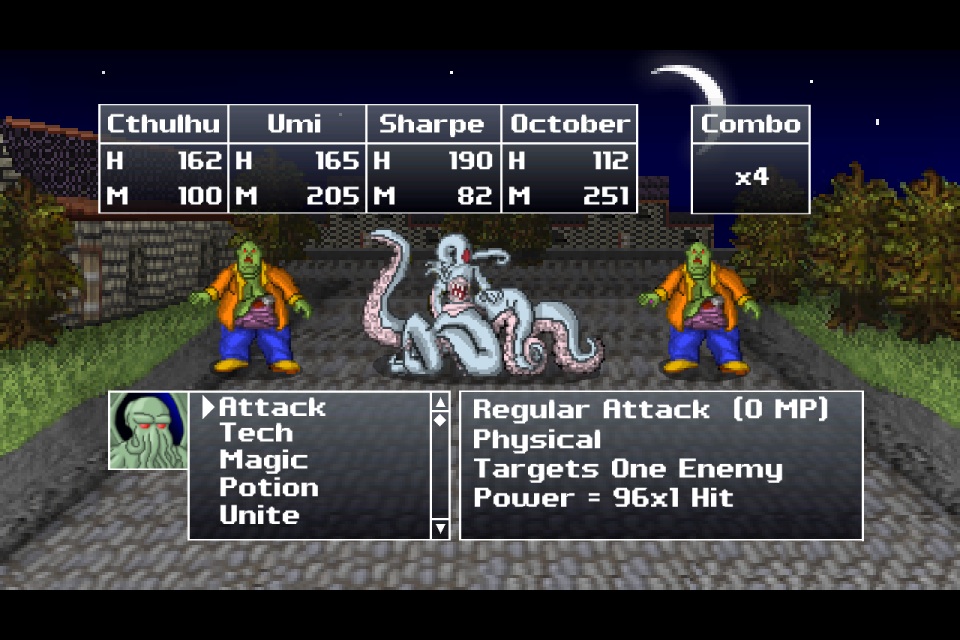 Last, a significant minority of players have found that the game crashes a lot on their device. Older iPhones and the iPod touch seem to have the worst of it, suggesting that the problem is memory related. The only way I could get it to run well on my 4th gen touch was after a fresh re-boot without opening any other program. Even then it would occasionally crash after battle, shaking my tenuous grip on reality.

TinkerHouse is being responsible about this: a d-pad option will be added with the next update, and they have said that they will fix the crash problem. No word yet on increasing the size of the text: that would be difficult without completely re-working the interface.

Whether the stars are right for Cthulhu Saves the World may depend on how much you love Lovecraft. If you’re just looking for a good retro-RPG, you might want to wait for the patches before giving this one a try.