Episodic gaming had such great promise a few years back. We had Half Life 2 episodes one or two, the first couple Penny Arcade games, and quite a few more. But along with Half Life 2 Episode 3, it all sort of dried up. So here’s a cool thing—the relatively quick development cycles on iOS seem to have resurrected episodic gaming exactly as it always should have been, and none of us have so much as blinked an eye. Case in point: Squids Wild West ($3.99).

There have been any number of iOS games that have already had a few sequels and carried a series onward, but Squids has something a little special going on. The story of Steev, Vahine, Winnick and all their undersea friends is a compelling one, one that’s being told in satisfying pieces. Two games in less than a year may not be enough to prove the formula, but I’d be surprised if The Game Bakers couldn’t pull it off with all the fun of Squids Wild West to work with, never mind its charming cast of characters. 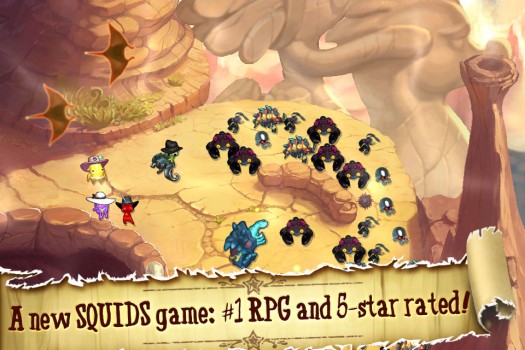 If you’ve played the original, you already know what to expect: slinging sea creatures toward their goopy corrupted enemies, collecting pearls, and unlocking hats, mostly. Wild West has all the things that made Squids great, but bigger and better than ever. Keen, right? If you haven’t played the original, know that it comes highly recommended—but you don’t need to play it to enjoy this sequel.

The story picks up right after Squids, and the backstory is laid out for new players with some early exposition. That means big spoilers, by the way, so if you want to go into Squids fresh you really shouldn’t start into Wild West until you’re done. The mechanics are also reintroduced. Mostly this means pulling back on squids tentacles and launching them toward any number of evil, corrupted things, treasure chests, or handy dandy switches. 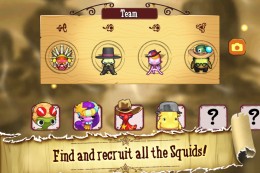 Honestly, slingshotting squids around isn’t the most compelling mechanic, but it works. Squids Wild West is kinectic, a little pinball-like, and it takes a lot of skill to play it well. Aim is paramount, but so is planning: knowing how many times you’ll be able to fire off a squid before running out of steam, predicting where your enemies will bounce and having someone in place to take the next shot, and working out great combos between the game’s five classes.

All the classes share the same basic slingshotting mechanic, plus bonuses. Scouts can dash up to three times, making for some pretty wicked bouncing combos. Troopers can slam into the ground with great force. Healers restore life to any friendly squid they contact. And gunners, obviously, have ranged attacks to work with.

Wild West’s levels don’t just tell an interesting western story (including a not-so-great trip into uncomfortable racial stereotypes), they’re also great fun. Spread between five main maps, they all break off into different types, with focuses on combat, speed, or exploration. And each level has three bonuses to earn, one for finishing within a certain number of turns, one for keeping all your squids alive and one for finding the hidden star tucked away in each level. 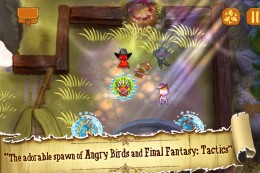 So yeah, if you didn’t already know, Squids Wild West has a three-star rating system. But it doesn’t feel so overdone, because the stars denote something far more important than just success: big-time rewards. The economy of the world is pearls, and you get them by earning stars. And killing enemies. And opening treasures. And pulling off cool tricks. You know the score.

Pearls can be used to level up your squids. More importantly, you can use them to buy hats. Hats aren’t just for lookin’ good (though they’re great for that too), they’re also an important type of alternate advancement. As you earn them you can transfer their stats to each of your squids, eventually building up some pretty great stat bonuses.

Now let’s address the elephant in the room: IAP. Squids Wild West has been tuned and tweaked until there is absolutely no necessity to make any purchases. And the IAP packs are more than generous—filled with power-ups and pearl bonuses, cosmetic hat options and even the option to max out and unlock everything. Pro tip? Don’t take advantage of that last one. Unlocking and leveling is half the fun.

Once you master all the levels and beat the game, there are still bonus levels to work through, secret Squids to discover and, oh yeah, Seahorses to find. Seahorses are pretty great: launch a squid into them, and you can use their added movement to do even more damage in a single turn. Multiply that with generously distributed random power-ups, and you can put your enemies through a lot of hurt in very short order.

Squids Wild West isn’t fundamentally different from its predecessor, but it’s a great follow-up. It’s also an excellent chapter in the story of Squids, one with dramatic tension, clever dialogue and all those kinds of good things. I could do with more series like this, especially ones with such quick turnaround. Let’s hope The Game Bakers has plenty of chance to continue this tale, because if the first two games are any indication, Squids is a series with legs.