Astronot ($1.99) is kind of ugly. Gameplay takes place in a tiny window framed by what looks like a Tiger LCD handheld casing, complete with chunky red virtual buttons and a colorful graphic featuring the game’s protagonist with an asterisk wedged squarely up his backside. Said protagonist and alien enemies are melted piles of pixels, reminiscent of something out of VVVVV held over a hot stove like your least favorite G.I. Joe. Oh, and those worms Eli And Brad mentioned in the video preview they put together? Yeah, they’re snakes, but look like frumpy, sad sock puppets.

So Astronot’s an ugly game. But it’s not a bad one. It’s a game made by Wade McGillis, a talented young man whose Twitter bio reads, “I don’t like what I make.” A game with a trailer like this. A game not so bad it’s good, but a genuinely good game that’s kind of bad. 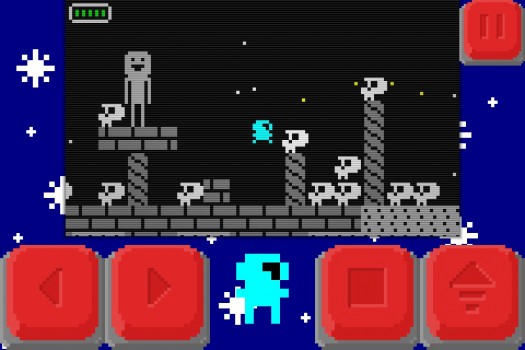 Astronot is also a Metroidvania game. As an angry-looking garbage worker who apparently propels himself forward by squatting, you must squat through a dangerous alien landscape as the lone survivor of a trading ship crash. In the Metroid tradition, Astronot presents you with a sprawling labyrinthine world to explore, guiding you to open up passageways and acquire power-ups along your way. Something immediately jarring when trying to wrap your head around the planet, however, is that the game does not include a map.

This means that you will either map things by hand, or just wander back and forth for a bit like I did, nervously squatting about until you’ve learned the lay of the land. Even as someone who loves exploration, this struck me as frustratingly archaic. While my notebook filled with Fez scrawl was something I buried myself in, mapping Astronot’s disjointed mass of pipework seldom felt worth it in the early going.

Luckily, the act of actually moving around the map feels pretty good. Your space(garbage)man leaps into the air with the calculated floatiness of an anti-grav Sackboy, and the screen-encompassing virtual controls are always responsive. The game feels nearly analog and it’s empowering. Which is really what Astronot is all about. For as helpless as it can make the uninitiated feel, there’s a lot of satisfaction to be had if you’re dedicated. Most any ledge can be climbed, most any boss toppled (save for maybe one… cough). It’s all there for the player to discover in his or her time.

There’s so much that seems indecipherable, and much of it has in fact been worked out by the dedicated crew on the Touch Arcade forums. In my time with it, I still haven’t collected all of the squares which unlock the secret ending. And what’s the deal with the “Glitchy” visual filter, which transforms the game into something that looks like Jasper Byrne’s brilliant Lone Survivor played on a monitor with the brightness turned down? I’m determined to figure it out on my own, and that’s how it’s intended.

It’s mature, old school design. Very rough around the edges, and certainly not showpiece for the platform. Ugly, in fact. But it’s also a lot of fun, and interesting enough that, given my resistance to cheating, I have a feeling I’ll be squatting my way through for another solid three or four weeks.

As the song goes, “I love this cool game, and all its sights and sounds. Boom-de-yah-da, boom-de-yah-da… “