How do you make a puzzle game that appeals to both casual players and people looking for a more hardcore experience? Nano Titan’s Webbies ($0.99) has a good solution: create a relatively easy path through most levels and pile on ways for motivated players to do better and better.

This isn’t an unusual tactic—see most other physics puzzlers with three-star rating systems for evidence of that. But the way Webbies has done it feels more free-form than most. You’re given a level and a goal, sure, but there’s also a list of bonus rules to keep in the back of your mind. If you want to perform better than the beginners, you’ll have to keep an eye out for every opportunity to put one of those rules into play. Webbies won’t go out of its way to point them out, so you’re pretty much on your own out there in the high-score frontier.

The game’s premise won’t win it much love: cute, hungry animals that need to be fed is an idea that’s verging on stale. Heck, Nano Titans used something similar in Foodies ($0.99) to much better (and more disturbing) effect. But other than that and the creepy-cute visual style, Webbies is crisp and fresh. 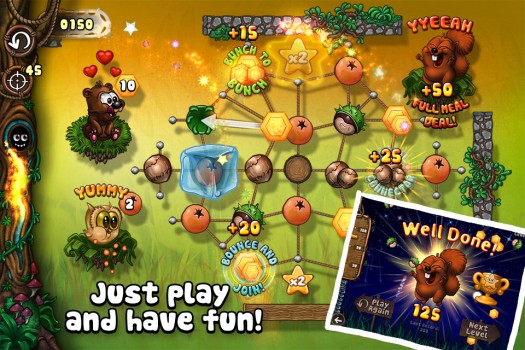 You start with a web of ropes and pieces of food stuck at many of its junctions. You can pull each morsel back, slingshot style, and launch it off into the distance. You can stack matching bits of food together, giving you more room to maneuver. Or you can lob them at animals, who will eat food of the right flavor (like honey for a bear, or nuts to a squirrel). Each piece of food you hit an animal with will knock one point off the level’s feeding requirement, and when every animal is fed, you win.

As the difficulty ramps up through Webbies’ 100 levels, the obstacle courses you need to fling your food through get pretty complicated. There are multipliers to toss things through, cages to unlock, and all manner of moving parts. Sometimes you need to sacrifice one piece of food to free another or bounce it off a few walls to reach your goal. And you always need to plan ahead lest you fling and stack your way into an inescapable corner. 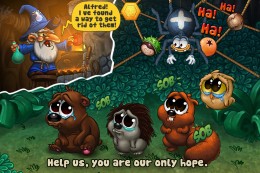 That’s the basic game, and it’s certainly challenging enough as you near its later half. You can skip up to ten levels, undo a single move and make use of targeting assists that you can earn in bonus levels. With all that alone, Webbies would be a competent but somewhat uninspired physics puzzler.

Most of these won’t be required to finish levels, so it’s up to you to decide when and how to pull them out. The game has a three star system that awards stars by points, but if you’re good enough you can often beat the three-star score. Sure it doesn’t do much for you to do so, but it’s much more fun to beat Webbies at its own game.

That’s where the game is at its best: giving players the satisfaction of going beyond what’s expected of them. It encourages experimentation. Sure, the basic solution is good enough, but how much higher can you go if you really try? You may need to plan ten steps ahead to pull it off, and it may require more than a few trick shots, but it will be oh so satisfying when you succeed.

Webbies might be casual-friendly, but it’s got plenty of potential for those of us looking for more of a challenge. And sure, it’s got the genre’s big cliches— the cute animals and the standard scoring system—but it takes them to extremes. It’s hard for a physics puzzler to stand out these days, but Nano Titans brings its best. This is a game with much more than rote mechanics, bright colors and a shiny interface. Webbies has some life in it, which puts it well ahead of the crowd.