As a kid, I spent a lot of time in the local coffeehouse playing Magic: The Gathering. The game was in its infancy back in those days, and I never dreamed it would have such longevity at the time I was building my blue/white Serra Angel deck and plotting the downfall of my opponents (read: poor saps at the coffeehouse who thought playing me was a good idea). While the habit of playing Magic wore off a long time ago, I’ve always watched with interest as new card games came out over the years, thinking that one day when I had time, I would take up the habit again.

Duel of Fate (Free) seemed just as good a reason as any to dust off my card skills, and I admit I was curious to see if the game’s pretty, anime-inspired art could follow up with good gameplay. In case you’ve never played a battle card game in your life, here’s how it goes: you start out with a small deck, as does your opponent, and you face off your cards to battle to the death. If they deal or defend from the damage, you’re safe; but if it gets through, you lose the card and take the hurt. The object is to reduce your opponent’s score to zero before they do the same to you.

In Duel of Fate, your deck of monsters operates off of the strength of the elements. You’ll have blue slimes, green fireballs, pot-bellied demons, and all sorts of other dudes that fall into fire, earth, and water categories. If you’ve ever played a video game in your life, you know this rule already: Water takes out fire, fire kills leaf, and leaf demolishes water (that last one doesn’t quite make sense, but okay.) This is the first rule of Duel of Fate that is going to work in your favor, so it’s best to learn it early. 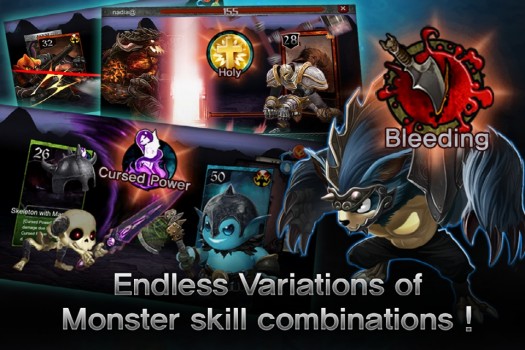 It took me a while to get used to how the stats worked. Sometimes it seemed random (they never explain this to you), but in the end, it’s about which element crushes the other, not whose turn it is. There’s some dumb luck in this method, but the most important thing is pulling cards to play that will counter the elements the other person plays so you get first strike. It took a while to stop playing high stat cards and thinking I could survive my opponent’s lower level card, but once you get the knack of it, it gets much easier.

In fact, Duel of Fate uses a lot of Magic‘s old tricks: In addition to the element thing, there’s also item and spell cards, which you can use to soup up each turn. These can be crucial in a scenario like when your opponent has the better card on the table. You might get taken out, but you can do clever things like do 50 damage as you die, so at least you get an evil laugh out of it all.

While there’s no actual tutorial available in the menu, the game walks you through a few single player rounds and uses each one to teach you a new facet of what the game has to offer. After a few of these, you’ll unlock multiplay, which sends you off to battle real life opponents online. While I enjoyed the game up to this point, it did give me some trouble here, kicking me out to the menu screen at random more times than I’d like to admit. 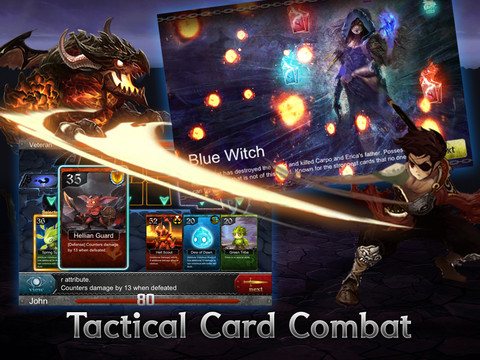 You get to choose which type of character to play and also start crafting your own decks when you unlock multiplayer mode, and that is fun too. One thing Duel of Fate has nailed is the interface. Everything is smooth and easy, from the card battles themselves to the deck management screen. If you’re feeling impatient with the rate at which the game introduces new cards to you, you can always take a stroll into the shop to spend your winnings. Buying booster packs is fun and uses in-game currency, which I really liked — a game always gets on my sweet side when it doesn’t force you to spend real life money to enjoy its perks.

Overall, I thought Duel of Fate had a lot to offer. Not only is it a free game, but its packed with stuff to do, and it offers a lot of strategy options as you burrow more deeply into it. Fans of Magic and Culdcept Saga will probably see the same merit in it that I did. The only thing I wasn’t nuts about was being forced to play multiplayer when I happily would have battled against the computer AI endlessly, but being a natural-born hermit, even I realize I have to be brave and play with others. Sometimes.