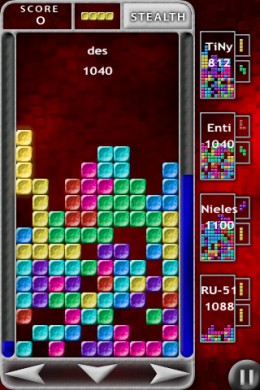 If we’re reading what we think we’re reading, victims of cloning might have a legal leg to stand on moving forward. According to Sunstein Law, The US District of New Jersey has decided that Mino, a popular Tetris-a-like, is infringing Tetris Holdings’ copyright. If this holds up, it seems possible that other studios will use this ruling as ammo in the fight against cloning — which is still common practice on the App Store.

Before we dive in, here’s a heads up: we’re not lawyers; we just write about video games on the Internet. Sunstein Law has a tremendously written, and we assume correct, take on the whole thing, and we’ll block-quote its article heavily because this seems like a really easy thing to get entirely wrong.

To rewind: Mino developer XIO Interactive and Tetris Holding went to court, apparently over possible copyright infringement. Here’s what went down, according to Sunstein Law:

In Tetris Holding, LLC v. XIO Interactive, LLC, the court rejected what has become a clone developer’s standard defense — that it copied only non-expressive, functional elements of the original game. The judge found the developer liable for infringing the Tetris copyright and its trade dress. In so holding, the court may have provided an important weapon for game developers to fight back against clones.

The court broke down what Tetris was mechanically, and found that the way Tetris Holdings expressed its game ideas are apparently protectable:

While these basic game mechanics and rules are not protectable, the court determined that Tetris Holding is entitled to copyright protection for the way it chose to express those ideas, particularly with respect to their expression in the look and feel of the game as represented by its audiovisual display.

In its defense, Xio relied heavily on the related doctrines of merger and scènes à faire. …

Citing these doctrines, Xio argued that even if there were expression in Tetris separate from the underlying ideas of the game, that expression should not be protected because it relates directly to the game’s rules and is dictated by its functionality.

The court disagreed, holding that expression is left unprotected only when it is integral or inseparable from an idea or function. The court reasoned that Xio’s expansive interpretation of merger and scènes à faire would create an exception to copyright that would likely swallow any protection a game could possibly enjoy. After all, most expressive elements of a game are related in some way to game rules and function.

We reviewed Mino around the time it hit the App Store back in 2009. Considering the two are so alike, we asked if it was worried about the app getting pulled with its community along with it. XIO sent us this:

XIO Interactive is dedicated to protecting the online Mino community from any threats, legal or otherwise. We are prepared to use any and every resource at our disposal to ensure that Mino and Mino Lite remain on the app store, and that our game servers remain running at all times, including substantial monetary and personnel resources. Our customers can rest easy with the assurance that we are here to stay.

Interesting stuff, right? We can’t shake the feeling that this might be a case we’ll hear about again in the future, as it’ll be used to push similar or future suits further. Feel free to visit Sunstein’s write-up on this whole thing — there’s a lot more to the case.

[via Sunstein Law, via PCGamer]