Inferno+ ($0.99), like its creator, Radiangames’ Luke Schneider, has a preoccupation with circles. It shows in the orbital whirl of your homing fire around the circular obstacles dotting the map. It’s also on display when rotating your ship down a tight passage, careening to ensure your Pac-Men drones aren’t swallowed by a swirling black hole. Inferno’s is a world of vortexes, globes and loops, and it wears its obsession like an Ouroboros tattoo. So, it’s appropriate that, if not his best, Inferno+ is Radiangames’ most well-rounded work.

Much of this can be attributed to the change of scenery. The neon-infused retro-futurism of Radiangames’ catalog remains intact while the open arenas of dual-stick brethren Ballistic SE ($2.99) and Fireball SE (Free) are replaced with the narrow corridors of Atari’s arcade oldie, Gauntlet. Instead of frantically jetting about with a pulsating swarm of enemies in tow, Inferno’s play is more deliberate, humming its way through cozy labyrinths, collecting items and destroying enemy generators on its way to the next exit. 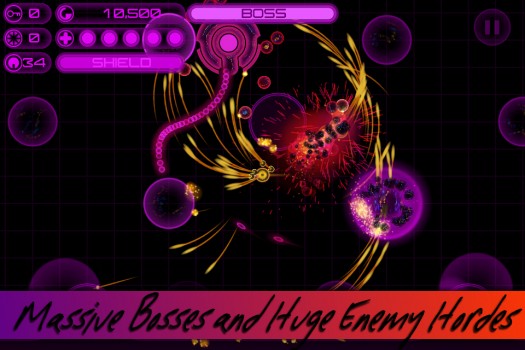 It’s a smart variation on the dual-stick shooter theme, and one that’s strangely reminiscent of my most recent obsession, Diablo III. Like Diablo’s fouled vistas, Inferno’s forty levels confront the player with seemingly insurmountable odds while more often than not leaving combat initiation up to the player. Instead of a pile of filthy peasant corpses or a rotten cathedral door, Inferno’s gnashing enemies are kept at bay by glowing barriers, unlocked with keys scattered throughout the map. It’s a system of progression that allows for more nuanced tactics than that of a Geometry Wars-styled snake devouring its own tail, and lends a bit of weight to the rather thin RPG elements. 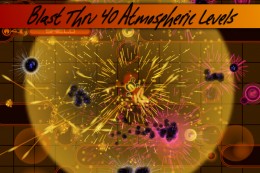 Of the four available ships, the Juggernaut plays the Barbarian of the bunch, with a built-in repulsor shield made for diving head-first into a sea of enemies before setting off a screen-clearing bomb. The Defender, my ship of choice, is the sly Demon Hunter, its homing missiles designed to peck away at enemies from afar while casually sipping on a juice box. The game’s other, admittedly less-utilized (by me) options are the Annihilator and Blade, variations of the Juggernaut and Defender, respectively, with an electrocution shield for bashing into and destroying enemies. This small selection of ships along with ten upgrades in stats like speed, health and the amount of drones you’re allowed tagging along, add some spice to the proceedings, enabling encounters to be approached in a variety of ways.

Eventually, that is. The game’s default difficulty asks little of a dual-stick veteran, and almost the entirety of my initial run through the game saw my nimble Defender and I charging directly into the fray before unleashing a Bangai-O pyrotechnic flurry care of my upgraded homing missiles and rapid-fire. Bosses, arena-style encounters every ten levels, are as equally straightforward with only the last one forcing me to take cover from its hail of bullets. More of a palate cleanser than an exclamation point, these deceptively docile giants turn ferocious in Inferno’s New Game+ mode. 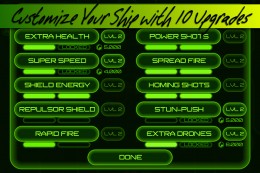 As expected, New Game+ allows retention of your stat upgrades, all of which you’ll need heading into the higher difficulties. The very first level of New Game+ was a wake-up call for what had, up until that point, been easy sailing. Forgetting to hit the shop to enable my upgrades, I carelessly opened the first gateway into what was apparently the gaping maw of bullet hell itself. A veritable deluge of glowing discs descended upon me and this cocksure writer, who had lost a whopping two health points from the pool of five during my entire first playthrough, died. I reloaded, hit the shop and died again. The higher-level tactics I mentioned earlier, and employed so earnestly in the early game before realizing I could win by smashing my Hot Wheels against one another, were now essential.

It’s fun, demanding play and somewhat bittersweet when you realize the curious omission of any kind of leaderboard. There are a host of achievements, however, some incredibly lofty. “Kill 25,000 Enemies,” one says? Uh… no, you.

It’s a testament to the game’s quality though that the lack of leaderboards, this hallmark of the genre, is not a dealbreaker. It’s not something I could say for any other dual-stick shooter save for Everyday Shooter. While obviously not as affecting an experience, Inferno+ is important in its own right. It feels like the game Radiangames has been working towards, a slab of perfectly dated ’90s techno with just enough meat on its bones to differentiate itself from the other dual-stick shooters on the platform; fully-formed, with curves in all the right places.