Pocket Planes [Free] is a tremendous, cohesive game that can appeal to your lizard brain as well as its strategy can stroke the intellectual part. It offers a character-rich and fluid world to explore and become a part of, and its mechanics have a soul. This is a game that does almost everything right; plus, it’s free, so just … try it.

But for me, Pocket Planes says something. It avoids all of the common pitfalls of free-to-play design by executing on the simplest of concepts: providing fun without a fee. It isn’t a pushy game, and its systems are balanced to benefit the user. In this age of F2P, games are starting to feel more like business models with graphics. Pocket Planes doesn’t. There’s a life to everything in it. It’s systems and mechanics have meaning. 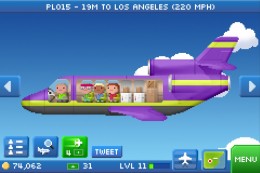 Pocket Planes is about getting to somewhere, almost anywhere, in an exotic but familiar world full of mimes, astronauts, and headlamps. Functionally, it’s a game about taking stuff to places in airplanes. As a tycoon of sorts, you’ll buy airports, upgrade and assemble airplanes, and ferry people and cargo across the globe in an endless effort to earn money in order to continue doing the above.

The actual mechanics are rudimentary. Heavy chunks of UI tell you what people and pieces of cargo need to go where, and then you click on the location to go. You can watch your airplanes fly at this point, or you can wait to resume when a real-time timer ends. A neat RPG-style component keeps track of your progress. As you send out more planes and make more money, you’ll level up and receive the ability to purchase more airports and unlock new and roomier airplanes that can ferry more stuff in one go.

It’s this carrot-on-the-stick design approach keeps the simulation engrossing. Every time you land a plane, you get one step closer to buying a mega airport in, say, France or New York. Every time you unlock a new airplane part, you feverishly check the in-game store for the rest of its constituent parts. 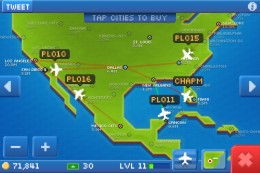 And even when you’re not looking forward to that stuff, Pocket Planes rewards. Watching an airplane fly, for example, can net you the game’s other currency, “Bux," which is used to buy things straight-up from the in-game store.

And then there are the touches. The world is cheery and welcoming; it’s all smiles and rainbows. When a Push notification goes off, its sound is a cabin ding. When you watch your planes fly, you hear the low-thrum of its engine. And you can read what you’re passengers are saying via an in-app riff on Facebook called “BitBook." Also, the world that you’re building is most definitely yours — these are your airports, your upgrades and your plans in action.

The strategy is engrossing. Which airport should I buy next? Should I skip this fleet of planes and just buy the next as soon as they’re available? If I stopped here, and here, and here, and had another plane pick up the layovers, will I make more money? These are the questions I ask as I play, at least.

There are some missteps. Foremost, Pocket Planes is a slow burn. You start with just three airports, and it takes hours before you start feeling like an actual tycoon. The end game can feel tedious, too — simple can only stretch so far. Fifteen hours is about my cap. And speaking of stretching, the screen in the iPad version feels too zoomed.

One of its neater aspects is its social component, the Flight Crew. As you play, NimbleBit will author several online-centric events revolving around sending one specific item to a specific place. By joining a Flight Crew and participating, you can win huge amounts of “Bux" if your team manages to deliver all the goods. Cool idea, and we’ll have to see how this shakes out as the game’s base grows.

There’s a lot of things going on in Pocket Planes. There’s simulation, there’s strategy, and then there’s the world that you’ve created and the people you might have interacted with along the way. While it’s probably true that the game’s mechanics will only keep your interest for so long, there’s a lot of game here to like. More importantly, though, Pocket Planes is just … fun. Game business doesn’t need to inform game design, after all. 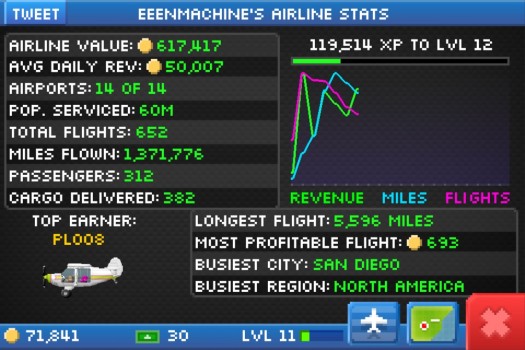 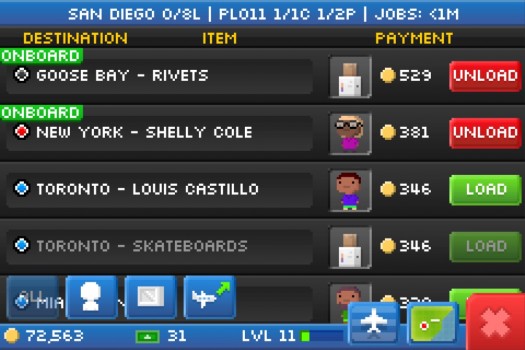 UPDATE: If you’re looking to join a Flight Crew, by the way, feel free to join our community’s crew #TouchArcade.