Not to be lost amongst the craziness that has ensued with the ending of E3 last week – with a hectic travel schedule, a major California freeway being shut down for an entire day, and preparing for WWDC in San Francisco this week – I was able to spend some time with a demo version of Infinity Blade: Dungeons at Epic’s E3 booth. And I’ve got to say that it was probably my favorite iOS title at the entire show.

Epic announced Dungeons at GDC earlier this year, and released a pretty sweet trailer for the game last month. Just to refresh your memory in case you forgot, Infinity Blade Dungeons takes place in the Infinity Blade universe and is more of a Diablo-style hack ‘n slash RPG rather than a guided sword fighting game. Epic isn’t commenting on how the new game will intertwine with the original Infinity Blade games, but it sounds like it takes place many, many years before the events in Infinity Blade 1 & 2 and will likely set up the events in some way for those games. 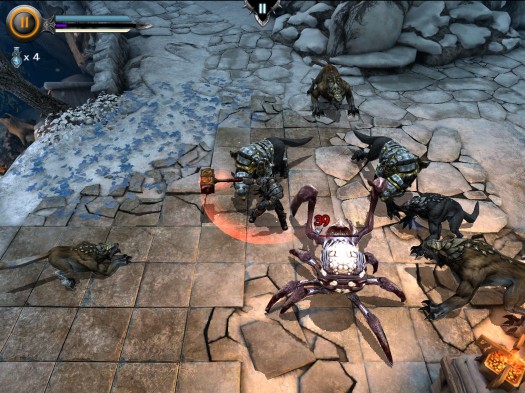 Since Infinity Blade Dungeons is an action game with free movement, not on rails, controls for the touchscreen must be carefully considered, and this is something that Epic absolutely nails. Simply touch where you’d like your character to go, or hold your finger down and drag for them to follow it. 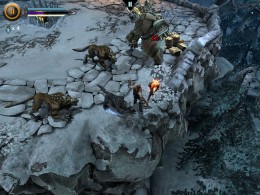 Other similar games have tried this control scheme in the past, so it’s not necessarily revolutionary, but the way Epic has implemented it is nearly flawless, and you really aren’t even thinking about fiddling around with controlling your character after just a few minutes of play. It just feels natural, and doesn’t get in the way of playing at all. Another thing that helps this is the dynamic camera that follows you around the game world, sweeping and zooming perfectly to make sure you always have the best few of the action.

Various swiping gestures and taps take care of selecting enemies and engaging in combat. Simply swipe at an enemy (or barrel or other breakable object, for that matter) to attack, and multiple swipes in a row will perform a combo of several attacks at once. It feels fast and fluid, and reminds me of previous action games like the newer Ninja Gaiden games or the God of War series, but not necessarily as complex. Still a lot of fun, though. 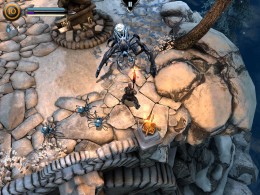 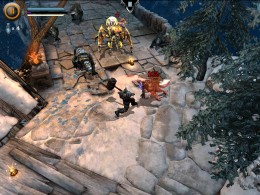 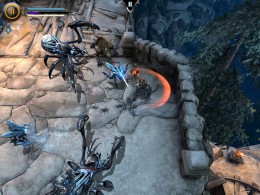 You can also perform special moves using a double tap on an enemy, or holding on your character to charge up and dragging to the enemy to attack. Both these moves feel like they have a ton of impact, and are simple enough to execute even in the midst of a heated battle. Finally, if you’re surrounded by a lot of enemies, drawing circles around your character performs a spinning attack which will hit any enemy close to you. All of these moves at variety to the combat, and can be upgraded throughout your journey as your character levels up. 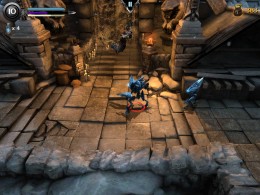 Infinity Blade Dungeons is broken up into different levels, which involve cruising through an area exploring and collecting loot by smashing boxes and barrels, defeating waves of enemies at different points in the level, and culminates in a battle against a mini-boss type fight against a fairly large creature. Once a level is completed you’re thrown into a forge area where you can equip your character with whatever loot you’ve found, upgrade attributes, and literally forge yourself new weapons through a touch-based mini-game.

The mini-game where your forge weapons seemed gimmicky at first, but actually adds quite a bit to the experience. The first part involves a timing-based game somewhat similar to how you would hit a golf shot in a golfing game. On your piece of metal that you’re forging, a bar runs back and forth and you need to tap when it’s directly over dirty smudges on the metal. Your accuracy directly translates to the attributes that the weapon will have, which is nice motivation for striving to do well. The other part of the mini-game is a bit less interesting, and just involves quickly rubbing blemishes of your metal by rapidly rubbing them with your finger.

The demo was designed so that once I completed the first level I had plenty of attribute points to max out my character, as well as enough elements to create a couple of really powerful weapons. This meant that in the second level in the demo my guy was insanely overpowered, but it was also kind of neat to see the results of where you can get a character to after leveling up through the game. Plus, it was just plain fun to be demolishing all the enemies with ease.

The Infinity Blade series has also been known for being exceptionally gorgeous visually, and Dungeons is certainly no exception. I’ll leave the trailer and images to speak for themselves, but rest assured that in person the game looks absolutely amazing. It has crisp visuals, wonderful enemy and character designs, and it ran at an incredibly smooth clip (at least on the new iPad the demo was running on). I really can’t wait to get my hands on the full version when it releases later this year, and if you are interested and want to dish about all things Infinity Blade Dungeons then head over to our forums.