Shoot The Zombirds ($0.99) is the kind of game you expect to hit the App store just in time for Halloween. Complete with a pumpkin-headed boy, a Tim Burton-esque atmosphere (well, when Tim Burton made good films, anyway), and a fleet of cute little pumpkin children to save, it’s just the thing to get you in the mood for the best holiday ever.

Except, Shoot The Zombirds came out in May. I don’t personally mind any excuse to get my Halloween on, however, so I had no problem picking this up even though it might have felt more at home released during October.

Shoot The Zombirds has one simple goal: use arrows to shoot flying zombie birds. You execute this while standing in a spooky, blood-drenched landscape while these aerial beasts crowd the sky above. Taking one out is as simple as timing an arrow shot to connect with one of them, but as you can imagine, there’s not just one type of zombie bird. Fat, slow ones and really speedy little tiny ones alternate, meaning you have to be really precise to make sure you nail the right ones. 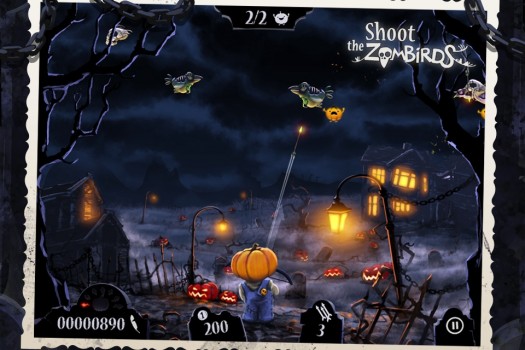 Some will also fly by with a pumpkin kid in their claws. Those are the really important ones, because you start each level with a minimum number of pumpkin kids that can be lost before your game is over. It actually only gives you two to lose in the first level, so really, the margin of error is pretty narrow. Not to mention, you also have a limited number of arrows and the only way to get more is landing shots. Prioritization is key.

The good news is a well-timed shot can take out more than one bird. When you nail more than one, you’ll get more points as well as a fancy little accolade for creating zombie sausage (yuck). In each wave, you’ll have a goal to shoot for, such as collecting 100 coins in one game.

Coins come your way by shooting speedy little winged skulls, which explode into a downpour of money. These coins can be used in the game’s “Grave Store" to get more arrows or to start your game with a higher number of pumpkin kids. Save more and you’ll have access to bigger powerups like Speed Up and Time Freeze. You can also change your character’s costume if you feel so inclined to save a lot of your earnings.

The “Cemetery Bank" bribes you a bit to get more coins — you can like the game on Facebook or rate it on the App Store to earn more scratch. You can also fork over real money if you’re in the mood to buy a lot of coins instead of earning them the old-fashioned way. For the most part, spending real life currency for items in games like this makes no sense to me, but it’s never required and if are into that kind of thing the options are there.

The simplicity of Shoot The Zombirds is definitely key in making it such an appealing pick-up-and-play title. While bite-sized gaming is the active ingredient in many iOS games, some nail it better than others, and this one falls into that category. It’s also very easy to get into, and I envision fans of The Nightmare Before Christmas really swooning over it. If you wait all year for the last day of October, this is a perfect way to visit early and start thinking about what this year’s costume is gonna be while you practice your archery skills.