I tend to like runners, and the more frantic they are, the better. ChickenBreak ($0.99) certainly seemed as if it would fit the bill, putting you in the role of a chicken trying to escape prison. Why a chicken is in prison in the first place is anyone’s guess, but as you can’t be sure what kind of foul play its been up to, you may as well just forget the story and start running. Or is it “fowl" play?

Ouch. Anyway, bad jokes aside, ChickenBreak lived up to my expectations as a high energy runner. The side-scroller starts you out in full-fledged flee mode, and you’ll meet all of the basic obstacles here. To avoid each, you’ll need to use a different kind of finger movement. There are rockets, which you can blow up with a single swipe, and giant rolling balls, which you’ll have to swipe quickly in and up and down pattern to blow up. 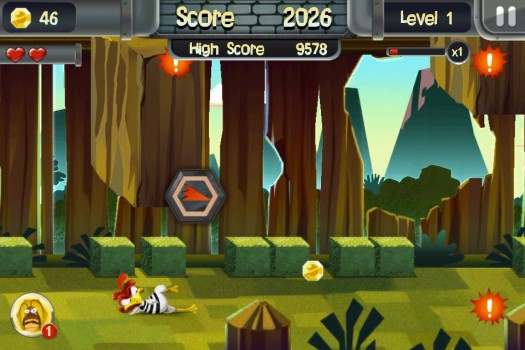 Bombs will also fall, and those must be avoided, so you can’t just go swipe crazy or you’ll blow off your own tailfeathers. You can score combos as well by taking out multiple rockets with one swipe, which builds up your combo meter. The neat thing is, you get little warnings for each of the obstacles, so you can prepare a few seconds in advance and be ready when they come flying.

Another thing you have to do is jump over chasms and avoid giant swinging weapons as you progress. While the concept here is good, one part of the execution really confused me: the button that allows you to jump up or slide under something would appear in the middle of the screen when you needed it, and vanish after.

I totally get what they were going for here, but there’s way more than enough going on on the screen to have to stick your finger in the middle of it to do these things. It distracted me during precious moments I needed to watch for what was coming next. I got used to it, but I wished they were on the bottom of the screen every single time I had to go through one of these motions.

As you successfully evade things, coins will drop. You don’t have to grab them, but if you do, they can be used in the shop that comes up every time you start to play the game. Goodies such as extra life and a shield to allow you to absorb more hits are available. If you are feeling really in the mood to up your game, you can use real cash to buy larger quantities of coins as IAP. Also, Game Center leaderboards are available, as well as Facebook and Twitter connectivity.

ChickenBreak is a cute, funky little title that looks great and plays well, and has an appropriately frantic soundtrack to go with its fast-paced gameplay. If it wasn’t for that weird button placement thing, I think I would have liked it even more, but even so, it’s still a fine way to while away a few hours and see how far you can get without being rolled over by a giant steel boulder.