If there’s one thing I think we’ve all learned after 4 years of gaming with a touch screen, it’s that the simpler you can make the controls on a device that’s devoid of buttons the better. Sure, virtual buttons that mimic a traditional game controller have come a long way, and are certainly adequate for many situations. But there’s really nothing like a control scheme that feels tailor-made for a touch screen device and gaming on the go.

The simplest control scheme out there is the single touch. You know, games like Tiny Wings ($1.99), Canabalt ($2.99), or Jetpack Joyride (Free), to name just a few, only really require you to touch the screen anywhere and are built around simple game mechanics to support this. That’s the same approach that Snowbolt Interactive and Crescent Moon Games have taken with their new game Slingshot Racing ($0.99), and in turn they’ve created one of the most enjoyable racing games on the platform that feels perfectly suited to both touch screens and mobile gaming. 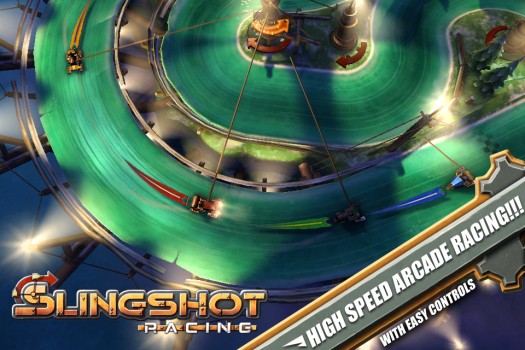 Slingshot Racing is a steampunk-themed racer with a really unique gameplay mechanic: there are anchor points at every curve in each track that you’ll hook onto with a wire attached to your vehicle, thus swinging you around the curve and “slingshotting” you forward. All you need to do is tap the screen to send your grappling hook shooting out towards the closest anchor point. And, although there’s a slight learning curve before it really “clicks”, once it does it works absolutely beautifully.

It really strikes me as a nice balance between Tiny Wings’ rhythmic touching and releasing mechanic combined with finding the perfect racing line around a track in a top-down racer like DrawRace 2 ($2.99). The tracks in Slingshot Racing are short enough that it’s no problem to hop in and knock out a few races when you have a spare few minutes, and it also means it’s very easy to retry races over and over until you have that one flawless run. And let me tell you, there’s nothing quite as satisfying as deftly hooking all the right spots and blasting through a curvy track perfectly towards the finish line. Great stuff. 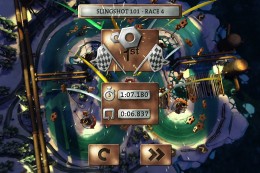 The single player campaign in Slingshot Racing is pretty typical of what you’d expect from a racer. There are just 8 different tracks, but the developers do a great job of stretching this out by offering reverse and day/night versions of each. With the slingshotting mechanic especially, racing a reversed track is like having a completely new track. Their are 16 different circuits with 4 races each, for a total of 64 races across the entire campaign.

There are also several different race types, and each race has 3 stars (er, bolts rather, to go along with the steampunk theme) that you can earn based on your performance. You have your typical race against 3 other AI opponents where the goal is to come in first, and hot-lap style races where your fastest lap time determines your bolt reward. Then there is a collection race type, where gears are spread around the track that must all be collected in order to finish. This race type is interesting since it’s possible to pick up every gear in just one single lap, but you’ll have to drive an absolutely perfect line. 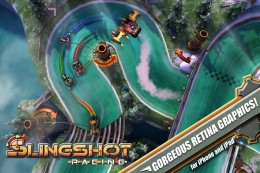 The last race type is the most interesting. It sees you racing 3 other opponents, but with a snowplow-like vehicle called the Chomper chasing down everyone from the rear. Get stuck in last place for too long and the Chomper will take you out. You race as many laps as it takes until you’re the last one standing. It’s a cool elimination-style race that adds a sense of urgency to not totally screwing up and ending up at the end of the pack. I found the possibility of being chomped a great motivation factor to do well.

Slingshot Racing also comes equipped with a same-device multiplayer mode. Up to 4 players can play at once, and since it’s just a simple one-touch control scheme each player takes one corner of the screen to control their vehicle. This obviously works best on the larger screen of the iPad, but it does work on iPhone as well and is an absolute riot with 4 people huddled over the same device duking it out on the track. Unfortunately there’s no sort of online multiplayer, but it sounds like the developers are exploring ghost racing options which would be perfect for a game like Slingshot Racing.

Overall I’ve enjoyed Slingshot Racing immensely, but it does have a couple of downsides. First off it’s sort of on the easy side, and I was able to earn 3 bolts on the majority of races on my first try. Then, some of the races I went back to to get my 3 bolts seemed to have an especially tight requirement for doing so, making the difficulty curve of the game sort of erratic. Also, there’s not a ton of variety throughout the campaign, and it all sort of starts to feel the same after a bit. The core mechanic is fun enough to look past these issues, but they’re areas that could use improvement in the future.

Despite my tiny complaints, Slingshot Racing is a fresh take on racing games and is a shining example of a game that’s well-suited to the touch screen and the mobile nature of iOS devices. Some new tracks and maybe some upgradeable vehicles would be nice for some variety, and some sort of online multiplayer would be really killer, but as it is Slingshot Racing is some of the most fun I’ve had with a racing game in some time. Players in our forums have been really digging Slingshot Racing as well, and for its introductory price of just 99¢ it’s a game that shouldn’t be missed.