It’s been a while since we visited Bag It! ($0.99), which we rather adored when it hit back near Christmas. It’s the sort of game that puts the fun into an otherwise mundane task, a tradition that goes back all the way to Paperboy and beyond. This week brings us a host of new reasons to get back to grocery bagging, with a free update that includes new content, achievements, and the adorably destructive Fizzy, a soda bottle on a hair trigger. 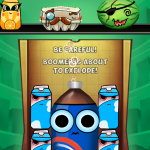 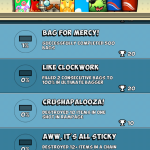 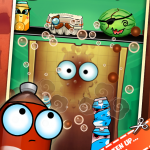 There has always been an element of violence in Bag It!—just try stacking a watermelon on a couple egg cartons if you want to see cute groceries die violent deaths. Fizzy takes it to the next level. He’s a contents-under-pressure sorta guy. Move him around too much, shake him up or bury him under too much weight and boom, you’ve got yourself a bag of food slurry. It would be horrifying if Bag It! weren’t so relentlessly adorable.

Fizzy comes with 16 new levels focused on him and Boomer, another soda bottle that’s timed to explode. Fizzy has also been added to all three endless modes, which have been tuned and revamped for better experiences. Endless Rampage mode was a great way to blow off steam before, rewarding players for crushing everything they can. Throw in Fizzy the live grenade and it gets a lot more satisfying. Check out the trailer below to get a sense of the destructive potential.

Wondering why we’re so into Bag It! in the first place? Take a minute to peruse our review—here’s a taste:

“It’s rare to find a puzzle game that feels so fresh but also so obvious. I’ve never played a game about bagging groceries before, but why not? It should be mandatory training for everyone who moves out on their own, never mind the folks who work at grocers. I have a quibble with the controls — it can be hard to rotate an item and move it to a new area at the same time — but otherwise it’s hard to complain about Bag It! It turns something that ought to be a chore into an absolute blast, and it does so with a huge, rich game"

This update also brings in 27 Game Center achievements, fixing the most glaring oversight of the original release. And to celebrate the update, Hidden Variable Studios dropped the price of Bag It! HD from $2.99 to 99 cents. Get it while the getting is good, it’s flying off the shelves as we speak.