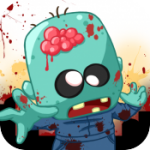 I don’t know about you, but I’m getting a bit tired of killing zombies. Sure, we’ve had tons of fun blowing the brains out of the living undead in the past, but there’s only so many ways you can portray it until it starts to get a bit old. Alive4ever mini (Free) from Meridian Digital Entertainment looks to capture the allure of zombie hunting once more, but in the end you’re left with a somewhat generic zombie shooter.

Like its predecessors Alive 4-ever ($2.99) and Alive 4-ever RETURNS ($2.99), mini is a dual stick shooter that focuses on the complete eradication of a wide variety of zombies. Players move from level to level with simple objectives like killing zombies (duh), surviving for a set time, escorting civilians, and collecting various vaccines. At the end of each mission, you’re scored by objection completion, zombie kills and how many total souls collected (each slain zombie drops a soul, which can be collected towards soul stones, the premium currency). There’s also a leveling system that lets you upgrade stats like health and ammo. 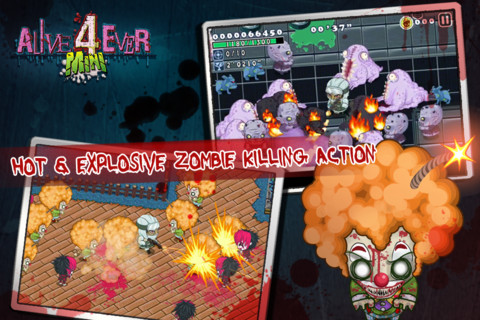 I didn’t find anything particularly innovative about mini, but what it does offer is implemented well. There are plenty of missions (along with a survival mode), the action is fast and frenetic with tons of enemies on screen, and later levels offer a decent amount of challenge. There’s also a good selection of weapons with the normal versions being mostly accessible through a standard playthrough (you’ll probably find yourself replaying levels a bit to earn enough standard cash for the big guns).

Also, while you may notice a lot of characters and superweapons only available for purchase with premium currency, you can actually earn it in-game at a decent clip. You can also use the premium currency in a game of chance in the hope of finding a refined soul stone which can supercharge your regular weapons. Also, you can always purchase the currency via IAP, which was relatively fair in its price distribution. 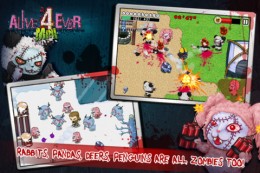 Alive4ever mini differs a bit from the earlier titles in its drastic shift in visuals. Gone are the pseudo-realistic dark undertones from the previous titles and in their place are bright, chibi-esque portrayals of zombies. It’s certainly a change from most zombie shooters and contributes to the light hearted affair of the overall game. However, I’m not entirely sure if it adds anything to the experience other than the fact that it’s a cute zombie game.

My biggest complaint with Alive4ever mini is the constant suspicion that I’ve done this all before. True, the cutesy graphics differentiate it somewhat from other titles but the gameplay basically plays the same as any other zombie dual stick shooter. Later levels inevitably lead to a standard cat-and-mouse chase of you against throngs of enemies on screen. There are boss battles to mix up the gameplay, but I found most of them somewhat bland. Also, the absence of multiplayer at launch cuts down on the potential replayability (although the developers have stated that a multiplayer update is coming soon). The lack of any kind of serious narrative doesn’t help distinguish it as well.

That’s not to say that Alive4ever mini isn’t enjoyable. In fact, if you’re looking for a new dual stick shooter and you aren’t tired of zombie hunting, you could do a lot worse than mini. Just don’t expect much in terms of innovation either in the gameplay or zombie front.