Honestly, there’s not much a rhythm game has to do in order to make me happy. A nice selection of tap-friendly tunes, decent UI, and adequate replayability features are the extent of my wishlist. For its part, O2Jam U ($1.99) manages to satisfy two of those three criteria, making it a satisfactory addition to the genre in my book. More importantly, O2Jam U manages to unveil a new wrinkle with the inclusion of freemium elements, a somewhat unique addition to song-based rhythm games.

If you’ve ever played a rhythm/music title on iOS you should be familiar with the gameplay in O2Jam U. Simply put, select one of the 16 currently available songs and earn the highest score possible by tapping out notes coming down the screen. Play results are scored on a grading scale and gems are awarded which can be used to purchase different tile patterns for each song. The tile patterns are a nice way to extend the life of each song, but I didn’t like the fact that patterns weren’t one-time purchases for songs. 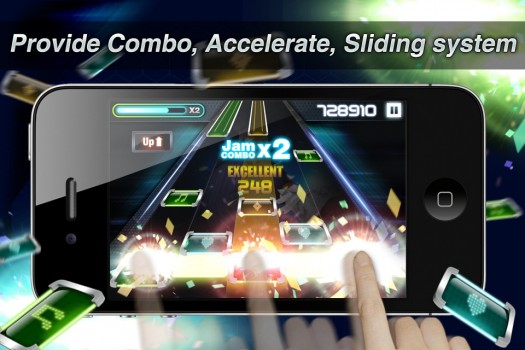 Song-wise, you can expect a lot of K-Pop and other similar beat-heavy tunes. Obviously, musical preferences vary greatly, but I thought the song selections were definitely appropriate and lent themselves to a fun experience. Thankfully, folks can simply download the app for free in order to check out the musical variety.

O2Jam U also offers a multitude of standard options in addition to pattern changes. For example, each song has three difficulty settings, as well as the option of playing with 2, 4, or 5 rows of scrolling notes. There’s also a speed option, for those wanting a bit more hectic experience. There’s nothing particularly groundbreaking as far as features, but it’s nice to see all the different options consolidated in one game, even if the overall UI seems to be a little peculiar (I imagine due to something being lost in the English translation).

While the UI’s quirkiness can somewhat be looked past, what’s less acceptable is the poor optimization that seems to permeate across all iOS devices. Selecting songs and navigating through menus almost always leads to slowdown and/or temporary screen freezes. I assume this has to do with the online infrastructure that the app hooks into (the game is a straight port of a PC title). Regardless, the performance issues put a significant damper on the overall experience, especially when it occurs mid-game (although some slowdown appears deliberate and not necessarily performance-based). Another significant side effect of the online system is a requirement to have an internet connection in order to play.

Seeing how O2Jam U is a free title, folks may be wondering about the freemium/IAP situation. Surprisingly, the system is quite fair. Upon first launching the game, you’ll be given 100 points which are used to play “paid” songs. Selection-wise, 8 of the 16 available tunes are free with the other half cost 3 points each. As you can imagine, the 100 points will go a long way towards replaying those 8 songs and when your point total eventually declines, you will slowly regenerate a limited number of points over time (the IAP for additional points is also reasonably priced).

Slowdown issues aside, I found O2Jam U to be a fun little music game. There are enough initial points to sample all the songs, and the decent amount of options ensures some replayability. Song selection may be a bit sparse, but that can easily be fixed with future support. There are some folks that will find the network requirement and performance issues to be deal breakers, but for everyone else, O2Jam U is worth at least a try.