The success of the digital version of a physical board game hinges on three things: the quality of the base game, the accuracy of the representation of said game and if both of these things are pulled off well enough to sustain a community long after you’ve tired of getting beaten by friends and family. With that in mind, is Scotland Yard ($3.99) a successful iOS port of a classic board game? No, but it could be.

It’s not as if Ravensburger’s Scotland Yard, the 1983 Spiel des Jahres recipient, isn’t fundamentally sound. One player is Mr. X, terribly creative criminal mastermind, stealthily darting about London in an attempt to avoid the grasp of five Scotland Yard investigators, represented by the other players. Players move about via ticket cards allowing access to modes of transportation around the game map: taxis, buses, boats or the London Underground. 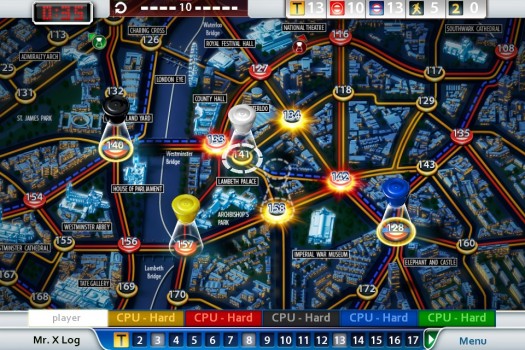 The goal of the game is for Mr. X to ultimately evade captivity, while the investigators have twenty-two moves in which to capture him by either landing on whatever space he occupies, or trapping him so that he is unable to take another move. The catch is that Mr. X is invisible… for a time. Every few turns Mr. X’s position is revealed to the rest of the group, and though his movements remain otherwise hidden, the method of transportation he uses each turn is not. So, knowing his general location, it’s up to the investigators to use the limited number of ticket cards divvied up before the start of the game to coordinate with each other and entrap him.

It’s fast-paced and encourages teamwork, ironically the iOS version’s fundamental flaw thanks to weak computer AI and broken matchmaking. The game, while designed to have six pieces on the board at all times, can be played with as little as two people, seeing a single player control up to five investigators. This is actually hugely advantageous, as it allows the single player to focus the efforts of each piece, sending investigators out to flank and herd, or assigning different methods of transportation, or routes, to individual investigators. Play like this, one-on-one, also happens to get very boring very quickly.

A shame then that the AI is so little fun. Most of my games against the AI as Mr. X saw me shuffling in a triangle in the corner of London before escaping up the sides, or using the Tube to steal away to another portion of the map. Problematically, these are the same buffoons you’re stuck with should you just want to play a quick game with some AI partners against Mr. X. It’s really aggravating when you’re certain a fellow investigator is sitting a mere space away from Mr. X, only to see the dude travel in the opposite direction, across the Thames, to what I can only assume is his favorite kebab stand.

At the time of this writing, Game Center auto-match play is broken. That means you’ll either be playing the dim AI, your Game Center friends that have room in their lives for another board game or your loved ones. Local pass-and-play along with basic Wi-Fi and Bluetooth functionality seem to work, but borked matchmaking is just one of several annoying technical and usability issues the game has including an updated game board that’s a strain on the eyes, 3D architecture that obscures important information, unresponsive clickables, crashes and an overly pithy rulebook.

Having done a bit of research, I was pretty excited to play Scotland Yard. Given its heritage, I envisioned a future with it as a permanent fixture on my phone, alongside the likes of Carcassonne ($4.99) and Ascension (Free) But it doesn’t have the heft of a good iOS board game. The comforting simulation of tactility, of texture, of weight; the aesthetic cohesion. Or the capacity to sustain a community. So no, ultimately Scotland Yard is not a success, but something to be shelved in the hope that Ravensburger soon revisits it.