Punch Hero’s (Free) moment of brilliance occurs when it has you against the ropes. You’ll come to a point during the game’s eighteen-bout arcade mode where progression seems well-nigh impossible. Down to a trickle of health, you will think about throwing the towel in, taking an uppercut to the chin so you can earn some gold and turn the thing off.

But you won’t. Instead, you weave under a vicious right hook and in cinematic slow motion land your own devastating punch. Your opponent is dazed. Jab, jab, jab. Right in his big, stupid face. He comes to, and, mad as hell, throws an uppercut. You weave under it and this time, in similarly cinematic slow motion you throw a left hook. The knockout punch. “Oh my God,” you’ll probably say while your cats look on in shame.

This game’s comeback KO is one of the most gratifying skill-oriented moments the iOS platform has to offer. It is akin to the feeling one gets when cracking a thousand on Super Crate Box’s (Free) Construction Yard, or killing your first Big Purple Freak in ZiGGURAT ($0.99). And while the skill ceilings of those games look down upon Punch Hero’s from high above, high-fiving each other in the Exosphere of Amazing, it does not matter one bit. That moment makes you feel as if you are awesome, thus, you are awesome. 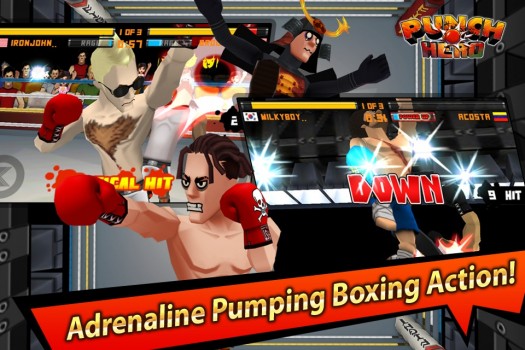 It’s a glimpse of the boxing game the App Store deserves. A glimpse because for that highest of highs, it is a ridiculously vertiginous ascent from the usual grind the game tries so hard to put the player through. Remember the aforementioned “eighteen-bout arcade mode?” If you want to see that through without succumbing to in-app purchases, you are going to have to replay most those fights again and again, ad infinitum.

Despite vague aesthetic similarities and a similar, mostly innocent (more on this later) propensity for racial stereotyping, Punch Hero is nothing like Punch-Out!! Whereas Punch-Out!! is a timing-based puzzle game, Punch Hero is, hey, a boxing game.

Opponents have no patterns as far as I can tell, so you are left with the game’s very simple tap-and-swipe controls, along with the knowledge that the next opponent you face is going to hit harder and have a larger pool of health. Which would be fine if all it took to trudge your way to the top was your wits and reflexes, but it’s not. 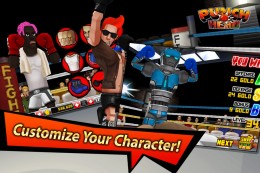 No matter your skill, you are going to get hit so hard, will face opponents so resilient, that you will need to upgrade your skills and gear using the gold doled out to you at the end of a match, or via IAP. Most items that actually buff your stats are nearly unattainable without spending actual money, while attribute upgrades the average player will need to complete the arcade mode take dozens upon dozens of monotonous hours grinding out gold to acquire. Or, you know, you could just buy them.

When microtransactions and in-app purchases became the monetization method of choice for many social and mobile developers, the worry was that “pay-to-win” would become the norm. Punch Hero utilizes a “pay-to-compete” system so unfair as to require an unfun punishment should the player not want to spend actual money.

A bit of a non-controversy occurred when another outlet’s reviewer noticed that, among all of the cultural stereotypes presented in Punch Hero, the African American fighters were portrayed most offensively. The writer’s casual description of the “full-lipped, wide-eyed ‘Sambo’ look” even fails to mention that the standard “black male” face is also called “Full Lips” in the game’s shop.

Punch Hero developer Johnny Oh, who seems like a really sweet guy, replied to the review, asking for feedback on how to change the black fighters to make them less offensive. It was an honest response to the kind of inadvertent racism that really can only be replied to with a sigh and a shake of the head. It’s a product of cultural detachment, rather than anything mean-spirited. By contrast, Punch Hero’s invisible paywall feels terribly mean-spirited.

It’s an unfortunate decision that’s marred what is otherwise a pretty good game of boxing. Groundwork for iteration, then, rather than something I’d recommend this go-round. That’s fine. As for me, I think I’ll go ahead and delete the game from my phone, hanging onto the memory of that one wonderful high.