If there was a list of things that I never expected to be talking about today, Duke Nukem 3D ($1.99) getting an update would probably be right near the top. But that’s just what has happened as MachineWorks has issued a new update for 3D Realms’ classic first-person shooter that looks to address the long-derided virtual controls in the game.

For a quick backstory, Duke Nukem 3D launched in the App Store way back in August of 2009. Id Software’s Wolfenstein 3D ($1.99) had hit iOS several months earlier and received critical acclaim, mostly centered around how well their controls worked. With a Doom ($4.99) iOS port also on the horizon, having Duke Nukem on my iPhone seemed like the greatest news in history for a long-time FPS fan like me.

However, the initial version of Duke had possibly the worst controls I’ve ever encountered. I mean downright unplayable. To the developer’s credit they quickly issued an update about a month later with a bunch of new control options, but sadly it did little to help. Sure, some people could find a scheme that was workable for them with some heavy tweaking of options, but the controls still felt pretty bad and have remained that way ever since. 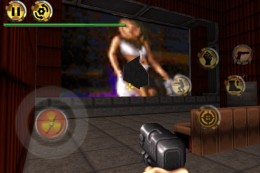 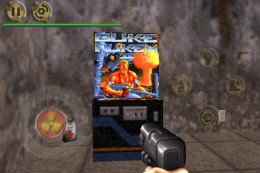 Until today that is, closing in on 3 years after the last update to Duke Nukem. Surprising to say the least, but unfortunately it’s also a good news/bad news situation. The good news is that the controls are actually quite decent now, offering an improved (but still lackluster) dual-stick option as well as a very good “drag anywhere to aim" scheme which really nails it. It may have taken a long time (that’s an understatement) but I can finally enjoy Duke Nukem 3D on my iPhone. Also, it appears that the visuals have been cleaned up considerably, and actually look quite good for a 16 year old game.

Now for the bad news. The update is full of bugs, one of which can render your controls unusable. You can avoid causing this by going into the control options before loading or starting a new game and selecting and then deselecting the dual-stick controls, but that will erase whatever custom scheme you might have previously created by dragging the virtual buttons around the screen. Basically, it’s not much of a solution.

In addition, there’s also a bug that silences the sounds from the game which I’ve only been able to fix by saving my game and killing it from the multi-tasking screen and then starting it up again. Also, for some reason the end-level stats screen is upside down and they’ve disabled the mirror reflection effect in the game. Finally, advertisements have been inserted into Duke Nukem 3D which will pop down when you first start the game and when wake your device from sleep with the game running. Lame. 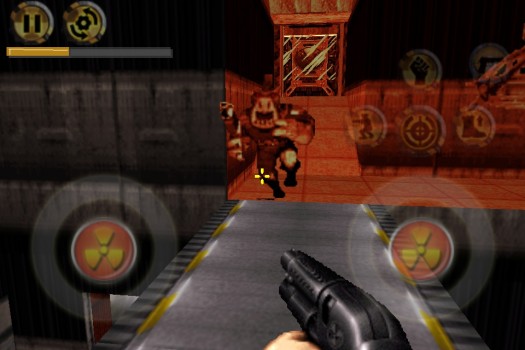 As delighted as I was to see a surprise update to one of my all-time favorite games, unfortunately this latest update for Duke Nukem 3D is a complete mess. If they can sort out the bugs then I really believe the new controls are a huge improvement, and bring the game more in line with the newer FPS games on the App Store. However, given the lack of attention paid to the game the past few years that seems like a pretty big “if”, especially since the iPad version Duke Nukem 3D SE ($0.99) hasn’t been updated at all. Also, I’m not crazy about ads being put into a game that I previously paid for.

At any rate, Duke Nukem 3D is currently free right now, so if you didn’t have it already you might as well grab it just in case they do sort out the bugs. If you could manage just fine with the controls the way they were before, then you’ll probably want to hold out on this update altogether until (and if) they can fix this situation.