It seems my favorite board games are about the end of the world. We’ve talked about my love of Elder Sign ($0.99), the game about stopping (or failing to stop) the rise of the ancient ones. And now I have a new sweetheart: Yggdrasil ($5.99), a game about stopping the forces of evil from destroying the world tree and changing the fate of Ragnarok. While it has a decidedly more Norse spirit than its eldritch cousin, Yggdrasil is more familiar than it first looks.

That first look might be a killer, though. Like so many board games before it, Yggdrasil makes the mistake of data dumping all over the player on the first glance, which left me completely confused about what lightning strikes had to do with anything, how elves were even involved, and why on earth I’d want to take anything from the World of the Dead. But it’s not nearly as confusing as it seems. One game’s worth of flailing around Yggdrasil was more than enough for me to learn how to play—from there on out, it was all about learning how to win. 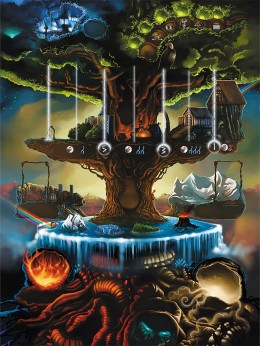 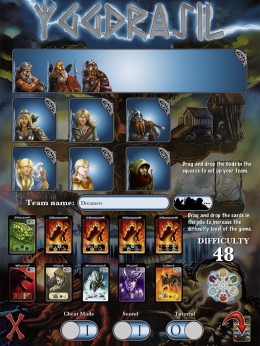 Let’s not break this down too far. If the game designers can’t explain it clearly, I don’t expect to have much more luck. But here are the basics: you begin with your choice of up to six Norse gods—you know, Thor, Odin, Freyja and the like. You can play any combination yourself or you can split them up for a cooperative pass-and-play experience; there is no online multiplayer so far. The more gods you add the longer you’ll need to survive. If that’s not enough of a challenge you can also throw yourself a few extra handicaps.

Good and evil take turns. On your god’s turn, you have to complete three actions (though some gods have unique talents that alter that total). Each of those actions must be done while visiting a different world, any of the nine that can be reached from Yggdrasil. In Asgard, for example, you’ll fight your enemies and push them back. In Midgard you recruit more vikings to die for your cause, and so on. 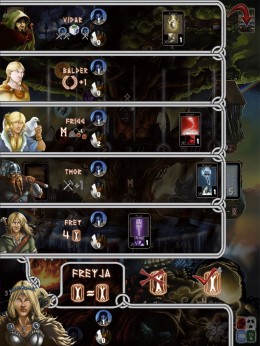 After each god takes his or her turn, one of the evil gods takes one too. One is drawn from the deck, be it Loki, Hel, Fenrir or any of the others, six in total. That one moves forward in Asgard, getting one step closer to Odin’s stronghold and the end of the game. Each enemy also takes a single action as determine by its card—Jormungand, for instance, destroys one of the islands where your Valkyries collect viking souls, and Fenrir requires you spend actions to calm him. Asgard has three lines of defense. If five of your enemies pass the first line, three pass the second, or one passes the third, you’ll only have one final turn to push back back or lose. This is complicated by the substantial strength they gain as they trek across the board.

All this together makes for an intensely strategic experience. Since the enemy is moving inexorably forward, every time you fail to push one back you’re losing ground permanently. So each turn you have to plan your three actions carefully. Elves and vikings can help guarantee your success in combat by lowering the number you need to hit on your dice rolls, but they’re a semi-limited resource and recruiting them costs actions. Weapons are similarly necessary and similarly costly. Early on you might be able to get away with a few full turns spent building up your strength, but if you don’t dig in and hold back the advance you’ll lose before you know it. 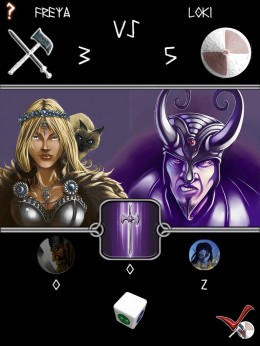 There’s quite a bit more to it. You have to manage the flow of viking souls, and move your valkyries across islands to recruit them. You have to defeat Loki’s ice giants as he summons them or they’ll cut you off from whole worlds. And at every step, you’re at the mercy of the cards and dice. Will Fenrir get drawn multiple turns in a row, eating away your actions? Will the dice give you the numbers you need to defeat your enemies? And do you have a backup plan? You’re definitely going to need one.

For all its tension, Yggdrasil isn’t actually extremely difficult to win. Putting together a good team and using their godly powers to their limits isn’t a guarantee, but it improves your odds substantially. And ultimately all you really need to do is survive long enough to wear down the enemy and empty its deck. Once you do succeed, there’s a single Game Center leaderboard to compete on, but no achievements. You’ll be well-rewarded for good performance nonetheless—as you win more games by wider margins you unlock new gods and new Ragnarok scenarios. These can increase the game’s difficulty substantially, so you can customize the game to your skill level.

For the most part, I’m impressed. The Norse theme comes through with surprising depth as each element of the game takes its place in the overall story of Ragnarok. And despite a slightly slow start, the game gets immensely tense. If you’re passing the iPad around to play, expect long discussions about strategy. The evil gods come on like a tide, impossible to hold back forever. Carelessness can mean a loss before you have any idea that you’re failing.

There are a few small quirks of the iPad adaptation, which has some errors in the text and instructions that seem to be written for the physical board game. On the technical side, it’s a bummer that the game isn’t Retina-ready. It multitasks, thankfully, but it doesn’t have any longer-term saving. Longevity might be a problem, too; it seems that once you get a good strategy down it will be up to you to push for harder scenarios.

Those things aside, Yggdrasil is giving Elder Sign a serious run for its money in the field of board games I most like to play solo. It plays beautifully on iPad, and looks nearly as good as it plays. Most of all, I enjoy Ygdrassil because it’s a game that gives me a good measure of control over my fate, and the fate of the world by extension. You’ve gotta be lucky, but the game rides on much more than luck. Board game fans would do well to pick this one up, and maybe pop in to our discussion thread for some tips when you do.