On the iOS platform, nobody has done as much for the 2D scrolling arcade shooter genre than Japanese developer Cave. For the past 2 years, they have consistently delivered high quality ports of their stellar back catalog of games to the App Store. They have yet to really have a misstep either, providing you have an especially unquenchable thirst for bullet hell-style shooters.

Cave’s iOS games come with several hallmarks, like touch controls that are arguably even better than physical controls, plenty of variety in scoring techniques, and a staggering amount of screen-filling explosions and interesting enemies and bosses. Their latest release Bug Princess 2 ($4.99), which hit early last month, is no exception. It’s the sequel to last December’s Bug Princess ($4.99) and you might also know it by its original name Mushihimesama Futari. It is widely considered by fans to be the best and most challenging entry in the Mushihimesama series. 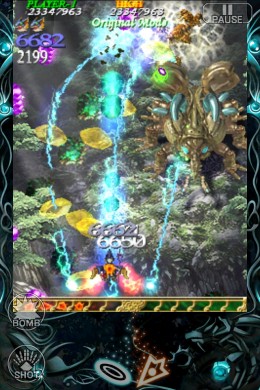 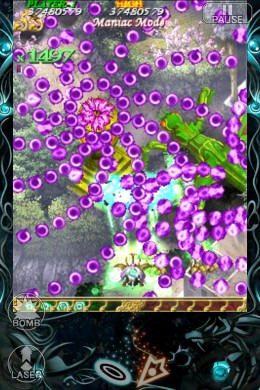 If you played Bug Princess on iOS before, then things will seem incredibly familiar to you with Bug Princess 2. The menus and UI are largely the same, you have the same options for screen sizes and button placement, and of course the same great touch controls. Also like the original, the meat of the game comes in a 5 level campaign which can either be played straight through in one go or individually by level in a score attack mode.

You have the option of 2 ship types to play as, each with their own firing style, and on top of that you can choose what kind of shot type you want: Normal or Abnormal. Normal keeps your satellite helper ships tightly beside you, while Abnormal has them moving more tactically independently from your own ship movement. Finally, you have a choice of 4 difficulty options – Novice, Normal, Hard and Hell – which do a great job of tailoring the game’s challenge to suit practically any type of player.

Bug Princess 2 retains another feature from its iOS predecessor (am I sounding like a broken record yet?) which is 3 types of gameplay modes: Original, Maniac, and Ultra. In Original mode you build up a multiplier counter in the corner of the screen by collecting gems dropped by defeated enemies. You’ll need to switch back and forth between normal bullets and lasers depending on the color of the counter, adding a layer of strategy as opposed to just blasting away at every enemy willy-nilly. Ultra mode uses the same scoring system but with arranged enemies and bullet patterns.

Maniac mode, however, is where Bug Princess 2 really shows its brilliance. Here you build up your multiplier meter using regular shots, and once it’s hit a certain point, you switch to laser to cash it all in. Using either regular shots or laser shots will produce different types of gems from fallen enemies too. This makes Maniac mode the most strategic in terms of variety of scoring ways, and in turn makes it the most interesting mode.

So there you have it. Bug Princess 2 shares a ton in common with the original Bug Princess, but thanks to some key differences in scoring and completely new stages it really stands out on its own. And like Bug Princess it’s also not overly complex like some later Cave titles, so for shooter newbies it remains a strong entry point to the genre. If you’ve had your fill of bullet-hell shooters then Bug Princess 2 probably won’t do anything to change your mind, but if you’re a leaderboard competitor or a Cave fanatic then you’ll find plenty of value in picking it up or at least checking out the lite version.