If there were ever a genre in need of reinvention, it’s the marble shooter. As a genre it’s been around for nearly 15 years now, and the two big names, Luxor and Zuma, are pretty much indistinguishable. Swap ancient Egypt for the Inca Empire and you’ve pretty much got the same game. PopCap stepped things up recently with Zuma’s Revenge ($1.99), which added boss fights and made a few alterations to the formula. But Luxor Evolved ($4.99), MumboJumbo’s answer to Zuma‘s evolution, is feeling like the genre’s next frontier.

It shouldn’t be mind blowing that Luxor Evolved looks different from its predecessors, but it sort of is. Between a new setting in space and wild geometric art it hardly looks like the same game at all, making this the genre’s first serious face lift since 2003. Of course, it is the same game—it’s still about matching and destroying strings of colored marbles, and it even has Luxor’s usual ancient Egyptian theme. But this time it’s space Egypt, and space Egypt has a few new tricks.

Like the last two Luxor titles, you control a ball launcher that moves along the bottom of the screen. Strings of colored marbles follow complicated tracks toward your (space) pyramid, which is unusually prone to death by colored marble. You stop them by launching other colored marbles into the strings to match three or more of the same color. With the help of a little aim assistance, this can all be managed on a touch screen as easily as it ever was with a mouse. 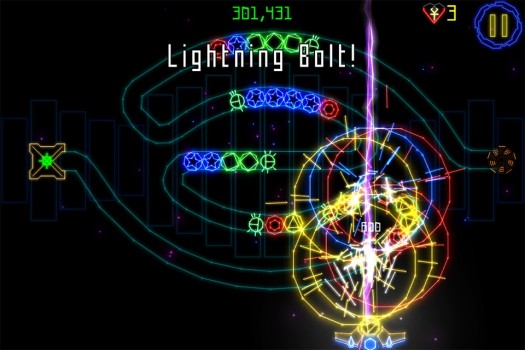 Luxor Evolved has a ton going on at any given moment. Not only are you matching marbles, you’re grabbing the treasures and heart pieces that explode out of them. Treasures are tallied to unlock secret levels, and heart pieces add up into extra lives when you’ve collected a few. You also need to rock your score if you want to level up, because the better you do the more powerups you get.

The powerups are my favorite feature of Luxor Evolved. Every point you earn goes to filling up a progress bar after each level. Whenever it hits its limit something new unlocks. This might be a brand new powerup—and they can do a ton of things, like blow up marbles, paint them in a single color, reverse their path and so on—or it might be an upgrade to an existing powerup. They have a lot of room to grow. 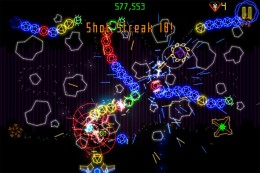 The extra-nice thing about the way the progress is measured is that doing poorly on a boss level means unlocking a huge pile of things. The bosses are complicated. Taking inspiration from bullet hell shooters, they protect their weak points with huge streams of marbles. You have to clear away enough of them to reach the weapons, and then the central ring of marbles. The only problem is that they keep coming back. If you manage to shoot your way through everything you expose the core, and one more shot will destroy it.

This can all be a little challenging, especially if, like me, you aim poorly when it counts. But there’s a bonus: if you really struggle and take a long time on a boss, you’ll pick up a ton of extra treasures and hearts and points. When you finally succeed you’ll be well rewarded with a pile of upgrades and unlocks. If one of them is a secret level, you’re in for an even better reward: they’re built as homages to classic games like Pac-Man and Marble Madness.

And let’s not downplay the new aesthetic. With its intentionally retro stylings, it looks like nothing we’ve seen from any of the big marble shooters before. That new style extends to every part of the game, right down to the interface, and a collection of techno tracks really rounds out the package. For the choosy, Luxor Evolved includes a selection of aim assist options and control tweaks—all of them variations on drag and tap controls. There are multiple difficulty modes to play through, too, and the usual assortment of achievements and leaderboards.

It’s not all good, though. The game currently doesn’t work for anyone who isn’t on iOS 5 (a patch is in the works), and even there I ran into a few bad crashes. One took a good chunk of progress with it. There’s also a popup for MumboJumbo’s other games on load, so heads up to the ad averse. I’m not the biggest fan of the series of aggressive price drops that have occurred since launch either, seeing the game drop from $6.99 to 99¢ incrementally over just the first several days, but at least that means those of you hopping on now will get a great deal.

Honestly, this game surprised me. Marble shooters have a real been-there, done-that vibe for me. I love them, but how many times can you play the same game with a new name? Luxor Evolved isn’t a full reimagining, but it’s different enough to feel exciting again, and it’s hooked me thoroughly. The issues are worth being aware of, but if you’re on iOS 5 and you hop on now you should be just fine. And really, classic marble-shooting gameplay in a fresh new package? That’s an evolution I can get behind.