Aby Escape (Free) is the newest freemium title from BulkyPix and Pixel Ratio, and a 3D spin on the iphone’s popular runner genre. Instead of dashing full speed to the left or right sidescroller style, the game plants the camera just behind Aby’s back and leaves it to you to guide the terrified raccoon down paths cluttered with rocks, cars, animal herds, beer-bellied hicks who lie in wait until you approach, and other obstacles.

To keep your unstoppable force from running smack-dab into immovable objects, you tilt your phone to weave side to side, swipe your thumb up the screen to jump, and swipe downwards to drop to your knees and pull off a Catwoman-in-Arkham-City slide, minus revealing cleavage. (Yeah, I know. Can’t have it all, though.) The core gameplay idea is reminiscent of Temple Run (Free), but Aby Escape does a nice job at iterating on the formula with some new ideas and some variety. 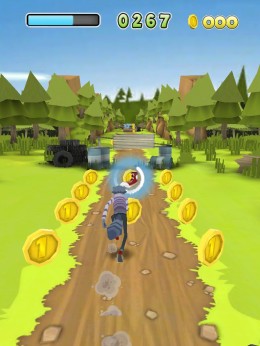 The game features two game modes: Story, and Unlimited. In Unlimited, your goal is to stay alive for as long as possible. You accomplish that feat by weaving in and out of danger to pick up shoes that keep your perpetually draining energy meter topped off. Aby gradually picks up speed the longer you survive, making extended play an exercise requiring absolute focus and twitch reflexes. Besides shoes, you can grab coins with which to purchase power-ups, characters, new Unlimited levels, and other unlockables.

And that’s where the trouble begins. The first time you load up Aby Escape, only one Unlimited level, Greystone Park, is available. Two other Unlimited stages are available from the in-game store, but at a cost of more than 3000 coins each. Want to try Story mode? That’ll run you 7500. You can unlock these modes in one of two ways: grind Greystone Park and pinch your pennies for hours on end, or shell out real money for IAP coin bundles.

The unbalanced economy pervades in other ways. Besides new stages, the shop also sells items like speed boosts that blast you forward and render you impervious to harm. The problem is, every item carries an exorbitant price tag. Each item can be upgraded up to five times. The first upgrade for each item costs 400, the next 1200, then 3000, and so on. Handy, but a major cut into your savings when you’re stuck with only one level to play. Playable characters and different types of feet like hairy Hobbit toes go for between 2000 to more than 4000, but don’t alter the game in any way; they’re purely for aesthetics. I hate to harp on this point, but with only one level to play, I simply considered all other purchases a waste until I’d invested in at least one change of scenery to spice up my time with the game.

Unlimited levels feature challenges that reward you with coins, but some of them just don’t make “cents.” Buy two upgrades at 400 coins apiece, get 50 coins back for completing the challenge. Uh, no thanks. I bought an IAP item that gives me two coins for every one I picked up, but that only increased my income from a drip-drop to a steady trickle. Eventually I shelled out five bucks for 20,000 coins—not because I wanted to, but because I felt like I had to. It was either that or more grinding. I unlocked the last two Unlimited levels before diving into Story, a sprawl of levels spread across Greystone Park and two new areas, the same ones you’ll play in Unlimited if/when you fork over the coins. 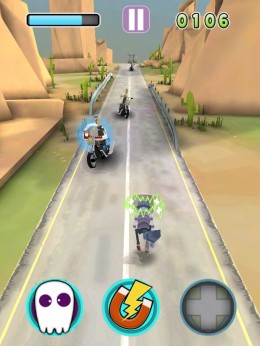 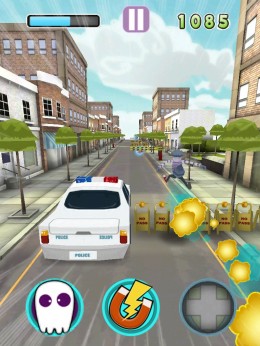 Story tasks you with racking up a high score by staying alive as long as possible and collecting every pair of shoes on each stage. Running into obstacles knocks points off your score and sets you back at a checkpoint. Most checkpoints set you so far back that you’ll have forgotten earlier terrain in your effort to remember what to do in the area that tripped you up, which amounts to a lot of frustrating memorization and trial and error.

Technical issues also abound. The frame rate chugs sporadically, spelling certain death in trap-heavy regions. Also, since you spend the game running forward into the distance, terrain you pass slides backwards as you run along but some of it slides too slowly, clogging the screen and blocking your view of the next hurdles. More seriously, though, was a store calculation error—I had more than the 400 coins I needed for an upgrade, but the transaction somehow took my wallet down to -97, which shouldn’t even be allowed to happen—and a crash bug that dumped me back to the home screen every time I tried to load an Unlimited level.

With so many strikes against it, what could possibly convince you to help Aby Escape? Because I’ll be darned if it isn’t fun. Grinding grew monotonous only because, really, who wants to look at the same environment over and over in any game? Actually <em>playing</em> the game is quite enjoyable. There’s a feeling of satisfaction and skill in any runner game that comes from guiding your scurrying lemming over, under, and around obstacles, marveling at your response time, dexterity, and lasting for as long as possible before inevitably slamming into something that reduces your bones to a fine powder.

Collecting coins, shoes, and power-ups requires near dead-on collision to register, but aside from the somewhat sluggish tilt-controlled weaving that doesn’t always keep up with the game’s gradually accelerating pace, the controls usually responded sharply enough that I felt encouraged to veer into danger and risk another visit to the Retry screen if it meant snatching an out-of-the-way coin placed in front of a trap. The game also plays fair by giving you a chance to shoulder past obstacles like cars and rocks unless you strike them dead on, which made me even more willing to dash in front of dangerous objects and grab goodies.

Three strong redeeming qualities ultimately saved Aby Escape from outright deletion. It’s fun, it’s deep (you’ve still got all the challenges and your personal records to break even after you’ve opened everything up), and it’s free. If this were a paid game, I’d knock a star off the grade, and fairly. The game really should offer activities from the get go or at least mark down the fee for additional content, but what is there provides loads of entertainment.