From the very first time I launched Pandemic 2.5 ($0.99), I was out to obliterate humanity. My implement of destruction was a virus I called “Iloveyou"—named for a classic. Iloveyou started its life in South Africa, a humble disease with a single carrier. He probably didn’t even know he was sick. At first, we were asymptomatic.

Iloveyou had room to evolve, with 8 EvoPoints to grow into. I spent them carefully. I enhanced our heat capacity, so we wouldn’t die out in the desert. I developed our first symptom: rhinorrhea, the runny nose. A little mucus can go a long way toward spreading a cold, I reckoned. I hoped to spread out to insects, but we weren’t yet advanced enough. I threw in dysuria and photophobia for good measure—not enough to kill our hosts by far, but enough to cause a little discomfort and hopefully improve our spread. 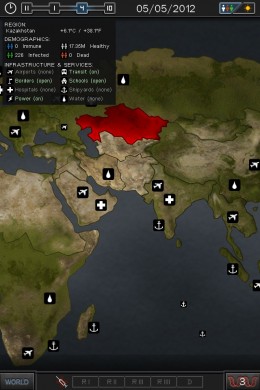 Then we began. The number of infected grew quickly, then stalled out. I had a few more EvoPoints to work with at this point, so we brought in our insect friends. Even with a few more symptoms, Iloveyou didn’t make it much further than that; we were too slow and our infection vectors just sort of got better. But I learned from that first experience. On our next outing we made it to the next tier of symptoms, picking up a cough. Then our victims began to suffer fevers. We lost a few of the infected early on, but we were finally on our way.

And so it went. At first we refrained from killing our victims. Hosts are more important than corpses. We spread across borders before anyone knew to shut them, took out hospitals before anyone knew what was going on. Once most of the world was within our grasp we took the next step and became fatal.

When people started dying, they knew they had a problem on their hands. They mobilized quickly, developed a vaccine almost before we could react. It was too late for most of them, but it was also too late for us: the people that were left were cured, and we would never see our dream of total global destruction come true. Granted, it was quite the morbid dream. It made me a bit queasy to see the number of living humans dwindle, sure. But it’s never nice to lose.

If all this sounds familiar, it might be because you’ve played Pandemic 2. The Flash game has been around for years—it even has its own popular meme. Pandemic 2.5 is a complete overhaul for the mobile crowd. With a new interface and a few improvements, it’s decent port of the desktop classic.

Decent, mind you, but certainly not great. There are little problems, like awkward text fields and introductory text that flows right off the screen. Bigger issues include things like a complete lack of tutorial, and a news ticker that flies by too quickly to read if the game is in anything but full-on sloth mode. 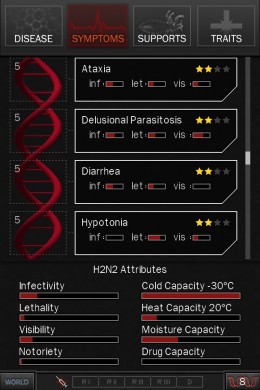 The biggest issue of all is that the game can be agonizingly slow. It’s simply not ideal for a mobile platform in its current state. Playing Pandemic involves a lot of waiting, especially if you’ve already lost the ability to win and just want to get your final score. Normally I’d pull out my phone while the slow parts passed, but, well, you can see the problem with that.

Here’s the thing, though: Pandemic in this form is just as compelling as it’s ever been. Some of the bigger problems with the Flash game have even been worked out. The meme is outdated, as Madagascar is no longer ludicrously paranoid unless you’re playing at the top tier of difficulty. There are also traits (and associated achievements) you can unlock by completing hidden requirements, something that builds a sense of overall progression. If you can ignore the interface problems, this is the best take on the subject matter yet.

So consider this a cautious recommendation. If you can stomach the mild horror of obliterating humanity, if you can handle a somewhat clunky port, it’s pretty great to have Pandemic on the go. It sounds as though Dark Realm Studios is already working on fixing some of the game’s problems, too. Me, I’m working on a new strategy. With luck, we’ll take the island nations, wipe ’em all out before they know what hit them. Awful to contemplate? Sure. But Pandemic makes a convincing argument: isn’t it time we gave the bugs their turn?