TouchArcade has gone a round with Bar Oasis before, back in 2010 when the first installment came out. However, I was completely unfamiliar with the game when I got word of Bar Oasis 1.5 [Free], which promises to bridge the gap between the first game and the sequel. I wasn’t sure what the difference was exactly until I read the fine print: the second game will give you access to tons of extra content, so we’re just getting a taste here. But the taste I got left me ready for much, more more.

For those of you who never played the first game in the series, Bar Oasis 1.5 offers an experience much like that of the Phoenix Wright series and other text-heavy games. In reality, it resembles a visual novel more than the Phoenix Wright series does, so if you don’t like lots of dialogue, don’t download this one. However, if witty banter and great mini-games appeal to you, you’re going to adore this. It also feels a bit like playing a really good anime, which is the ticket straight to my heart with no stops inbetween. 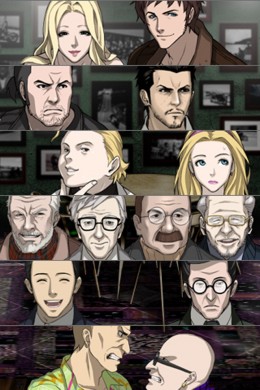 In Bar Oasis 1.5, you play the role of an attractive girl named Carla who loses her job and finds herself at Bar Oasis much by accident. Despite your relative lack of experience, you quickly find out from the head bartender that the guy they usually count on (Vincent, from the first game) has gone running off to China after some elusive woman. And so, they’re desperate for help. You get drafted into his old spot, with lots of characters waiting to get to know you as you learn how to be a great bartender.

Bar Oasis 1.5 has two main modes: story and making drinks. The game utilizes motion, so you will actually tilt the phone to pour and shake it when you use the mixer. One of my only complaints about the game was trying to master the timing (but I think that’s part of the point). Sometimes it seems like timing is the key, as there is a timer in the top right corner that tells you how well you are doing.

It says “Pro" if you’re fast enough, and will eventually tick down to “Amateur" if you take way too long. Making the mix drinks also means memorizing the backbar and where things are, which will come naturally after you’ve made enough preliminary drinks. The game is very smart about this as you serve a whole lot of bottled beer and whisky shots before you get down to more varied orders. 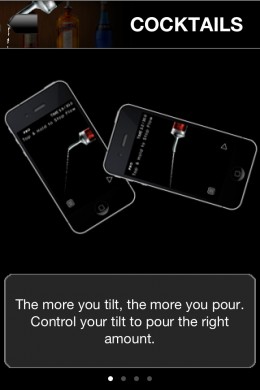 One really cool thing about the game is that all the drink recipes are accurate, so as you unlock them all, you’re also getting a handy recipe app to make cocktails with in the process. It’s when you notice little details like that that you start to realize how clever this game’s entire concept really is. You also have a drink making mode available right from the menu, so you can access the recipes easily and also practice making the drinks. This comes in really handy if you are struggling with getting the drinks right in story mode.

Bar Oasis 1.5 is easily the best title I’ve played on my phone in ages, but that’s also a matter of personal taste. I’m a huge fan of innovative concepts, and in a sea of physics puzzlers, you really notice when something swims to the forefront. The character development is clearly the focus of this game, and it’s nicely balanced with the drink making mechanic.

There are only 20 drinks available in this limited free teaser version, but the developers promise 100 in the upcoming Bar Oasis 2. Frankly, I would have come back just to spend more time with the characters, but I’ll take more drinks to learn as a backup excuse. Don’t miss this one. It might be free, but I’d have easily paid for a title as interesting as this and am eagerly looking forward to Bar Oasis 2.