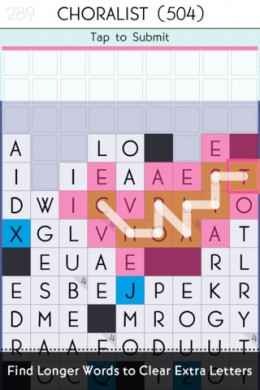 I’ll be the first to admit, when the discussion first started on giving Zach Gage’s SpellTower ($2.99) five stars in our review last year, I distinctly remember raising an eyebrow and saying, “Guys, it’s a word game." Truth be told, until then I hadn’t spent much time with SpellTower, but once I did… I was hooked. So hooked that this simple looking word game wound up as an honorable mention for our game of the year.

Nissa explains what the game is all about:

SpellTower isn’t bogged down with complicated rules or conditional abilities. The tutorial is only a handful of screens expressing a handful of simple rules. You can make a word as long as it’s in the game’s dictionary and it’s at least three letters long. Words that are five letters or longer clear letters all around them. You can’t make the same word twice, and if a letter has a number on it, it needs to be used in a word of at least that length. Finally, uncommon letters like Z, J, Q and X clear their rows if they’re used in a word.

Those rules will carry you through SpellTower’s four game modes, which change up how the board is presented. Tower mode gives you 150 letters to earn the best score you can. Puzzle mode adds a row to the board each time you make a word, and if any column hits the top your game will end. Extreme Puzzle mode follows the same rules, but requires longer words faster and more often. Rush mode adds new rows over time, putting you on the clock.

A fifth game mode was added in a recent update, introducing local multiplayer. It shouldn’t be much of a surprise, but, spoilers, it’s even more fun than just playing SpellTower by your lonesome. This update has also revitalized my love for this game, and I’ve spent the past week absolutely engrossed in SpellTower.

Since the update landed, SpellTower has been rocketing up the iPad charts, and to attempt to push the game over the edge and take on Angry Birds and Draw Something, its price is being slashed to 99¢. If you’re even vaguely interested in word games, you need to pick up SpellTower. Heck, if your mom has an iPhone, tell her to get SpellTower, I bet she’d love it, and maybe love you a little more in the process for recommending an awesome video game.

Tell her TouchArcade sent you.