Growing up as an avid Mac gamer in the 1990s, I was a huge fan of RPGs put out by the folks at Spiderweb Software. Not particularly known for their graphical prowess (even back then), these shareware games of old focused more on exploration, narrative and, most important, freedom. Avernum: Escape From The Pit [$9.99] is the second game from Spiderweb to hit iOS, serving as the pinnacle for these RPG tenets and should be looked at as a gold standard for iOS RPGs.

First, a brief history lesson is in order. Avernum for iPad is a remake of the 1999 Avernum title, which itself was a rewrite of the 1995 Mac shareware title Exile: Escape from the Pit. While each iteration brought visual and combat upgrades, the same open-ended exploration system remained. The same holds true for Avernum for iPad, which receives overhauls in both its visual and character/battle systems.

In Avernum: Escape From the Pit, the Empire rules the surface. Anyone that crosses this oppressive regime is banished to underground region of Avernum, a world unto itself that replaces the sun with luminescent moss and the sky with endless caverns. The world, along with all its inhabitants comes to life in the game’s deep narrative which could easily span its own novel. It’s this world that you’re violently thrown into, and it’s in this world that you are free to do what you wish. 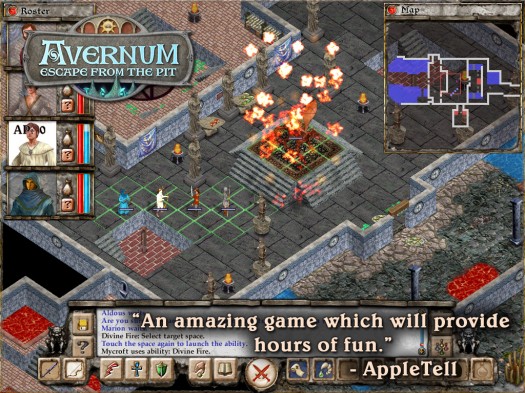 It’s this freedom that makes Avernum such a compelling and enjoyable experience. From the moment you customize your four person party at the onset, you are allowed to do what you wish. Sure, you are presented with some overarching decisions as you spend more time in the world (complete with three separate endings), but like all great RPGs, the true reward is in the journey. Whether you choose to be a willing asset of the struggling makeshift kingdom in Avernum, a lone wanderer trying to make do in the cavernous wild, or an agent of destruction and chaos, all paths are available in this title.

In terms of character development, there’re attributes, abilities and traits to customize, each being open to all characters. You really can’t appreciate the sheer amount of options you have as opposed to most other RPGs as a plethora of weapons, armor, abilities and spells supplement the core character stats mentioned above. Fans of the original Avernum series will notice that some of the skills have been streamlined. However, the options have been consolidated for the better, preserving the majority of the customizability while making the game far more accessible. 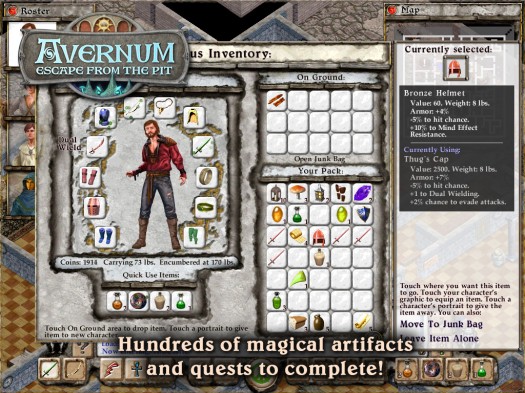 For those looking for a rundown of Avernum’s gameplay, you need not look any further than our review of Avadon: The Black Fortress, Spiderweb Software’s initial iOS offering that debuted last year. The same isometric, turn-based combat system returns, complete with various difficulties, an auto-save function and a new collection of achievements to earn. As with Avadon, the touch-based control system works well enough, although there are occasions of imprecise tapping, making your characters potentially act in ways you did not mean.

One of the side effects of open-ended gameplay is a shift in exploration and gameplay style. In the world of Avernum, you can and most likely will run into areas that you simply should have not stumbled onto. Enemy fortresses may have hidden rooms (complete with warning signs) featuring overpowered enemies that may wipe your party out. This leads to a lot of saving/reloading as well as a lot of backtracking should you choose to return to previously visited locales to beat that one powerful demon. Fans of streamlined experiences may balk at this gameplay style, but I love the variety as it sets the tone of Avernum as a chaotic world that isn’t as clear-cut as it may appear.

As we mentioned earlier, Spiderweb Software games are homages to classic 90s RPGs in many aspects. That includes the visuals and music, which are simplistic and work just enough to provide ambience. And yet, there were many occasions while playing in which I felt far more attached to the events unfolding than I have while playing any ‘next-gen’ RPG. The amount of effort and care put into the narrative, quests and even level design create an atmosphere that is sorely missed in other titles (assuming you’re willing to lend an able imagination to fill in the gaps).

While Avadon served as a streamlined ‘introductory’ experience to the world of classic RPGs, Avernum (as evidenced above) removes all the handholding in order to create a more open-ended experience. I believe this choice makes Avernum the more fulfilling and satisfying title, as well. The storytelling, customization, and sheer amount of content make this RPG a true powerhouse on iOS. There’s also a certain amount of nostalgic satisfaction as newer gamers are able to experience a world made popular during the Mac shareware golden age. While there will undoubtedly be some who turn away because of the retro look and feel, a truly rewarding experience awaits anyone else willing to dive into the pit.