The name Spiderweb Software is a bit misleading, after all, it’s mostly the work of one man, Jeff Vogel, who has for almost twenty years given us some of the most intricate RPGs on PC and Mac. Until now, at least, these were often an inclusive, old-schooler affair. But Avadon: The Black Fortress HD [$9.99] is one of the first to be easily approachable — it’s also the first to hit the iPad.

You’d be forgiven if you’ve glanced at screenshots and balked at the idea of playing Avadon, it’s not a pretty game. Visually, it falls somewhere in the ’90s, pre-CD-ROM drive, which is to say it’s an isometric RPG akin to something like Baldur’s Gate, Ultima or even Fallout. It’s filled with old-fashioned tilesets, hardly animated sprites and a locked camera that doesn’t allow you to zoom nor rotate. While I’m getting things out of the way, I should probably also mention there is no musical score. The sound, when it does exist is hardly worth paying attention to and the amount of modern day polish slathered on here lays somewhere between murky and non-existent. 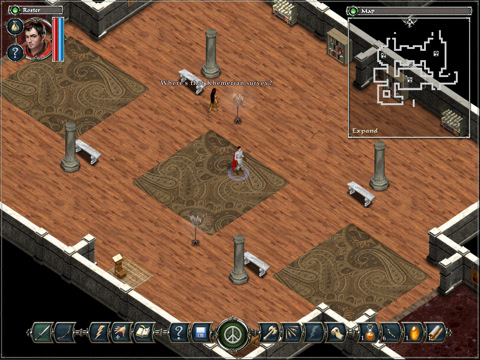 But none of that has anything to do with what makes Avadon a good game, because it’s good based solely on the actual game, not the flair.

Avadon isn’t as hardcore of an RPG as it might look on first glance and it’s also considerably more approachable than Vogel’s earlier games. You start the game by picking one of four pre-built classes and typing in a name. No complex stat sheets, no guessing what abilities you’ll need and what you won’t. You’ll meet other adventurers along your journey who will join your party. You’ll level up through your adventure, but it’s done mostly through a small skill tree, not a vast collection of unknown abilities leading to more unknown abilities.

Combat is turn-based and works well, provided you enjoy turn-based combat. If you don’t, consider this an ample warning. Depending on the difficulty level you chose, you’ll need to concentrate on your strategy in different ways. There is, quiet literally, something for everyone here. A complete RPG-virgin can pick it up and walk through the game with little trouble on Casual, but the higher levels should provide adequate challenge for players of all backgrounds. Naturally, you’ll pick up loot, outfit your team with different equipment and change around your stats. For the most part, this is all relatively self-explanatory, although the menus don’t make things easy if you’re swapping items between party members. 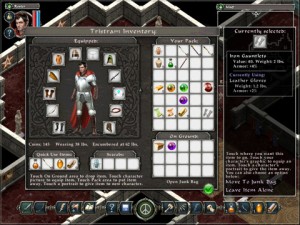 It’s the story that really matters here more than anything else, it’s what’s going to keep you going through the night. That story bends to your will and your actions and like the best RPGs, you’re not always aware of it when it’s happening. The core of the narrative comes from you enlisting as a Hand to the Pact, a high-horse power created by a group of nations bent on protecting the good of itself and its people from a fortress called Avadon. This doesn’t just mean they protect the borders, it also means they’ll burn down villages, kill helpless creatures and lock people into prisons.

As with most of Vogel’s games, the writing in Avadon is well done and sprinkled with enough wit and humor that you don’t feel oppressed by the seriousness of it all. Within a few hours you’ll have a good grasp on the Avadon’s structure, the religions, your fellow fighters and a number of the NPC groups. You’ll also start getting the sneaking suspicion the Pact and Avadon aren’t all they’re cracked up to be.

As you play through the game’s 20-30 hour campaign, you’ll start to notice how your actions are affecting the larger story, from minor quips in dialogue or descriptions to fully-fledged moments that couldn’t have existed had you not done something earlier. The dialogue options aren’t the color-coded morally simple choices of modern RPGs, nearly every time you need to respond to a situation it will sit somewhere on a gray scale between good and evil and you’ll never know for sure if you’re making the right choice. The plotline is basically linear, save for a fair share of side quests, but you still feel like you’re having an affect on the world, for better or worse. 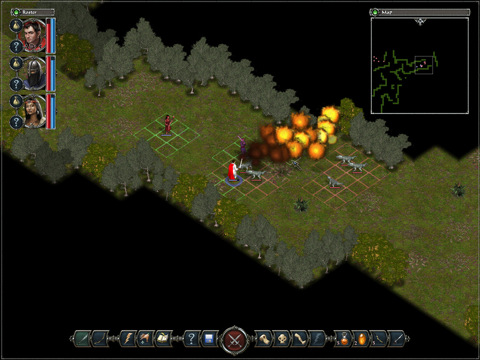 The translation to iPad is relatively fluid. I had a few crashes and memory errors while playing, but nothing that set me back too much. The touch screen works well for this type game, although you’ll occasionally accidently move your characters around when you mean to fight because you’ll tap on the wrong part of the grid. The item screen, as mentioned earlier, is a bit unwieldy with a touch screen and requires an excessive number of taps to get to business, but you’ll get used to it. If you’ve played Spiderweb’s RPGs before, you’ll know what to expect, but Avadon is considerably more linear and less open than much of its previous work. That’s not a bad thing in this case; it’s a good entry point into a deeper RPG for iPad players and a great throwback to people who’ve been playing for a long time. It’s streamlined, yes, but not to the point where you feel like you have no control. You still have to read signs to get directions, take note of what people say and remember (in your head, not in an objective screen) where you’re going and why you’re going there.

Avadon: The Black Fortress HD might take a little while to sink in, but if you get enmeshed in the narrative and the world, it’s hard to walk away from it. It’s been a long while since I accidently stayed up all night with a game, but Avadon managed to do that without even bothering with fancy visuals or voiced dialogue. It’s not going to be a game for everybody, but if you’re weary of spending the completely fair price of $10 on the iPad version, I’d suggest checking out the demo for the PC or Mac versions. The experience is similar, although the iPad version will occasionally run into some frame rate drops and has a lower resolution. If you’re a fan of ’90s RPGs and have been craving something that doesn’t hold your hand or guide you along on the iPad, this is the perfect game for you.