For the last couple days, I’ve been turning a dilemma around in my head. Do I tell you guys how fun Sky Gnomes [$0.99] is, and thereby increase the number of people who are likely to defeat me in a given tournament? Or do I just keep raking in the sweet, sweet prizes for my wins?

I suppose I’ll take the high road and let you in on it. Here’s how Sky Gnomes works: each day you face a new slate of players in a series of races. You launch a garden gnome on a little airship straight down at top speed, dodge storm clouds and ice balls, collect coins and snowflakes, and try to smash perfectly into the landing pad ahead of your foes. Do so, and you can turn your winnings into new parts and upgrades for your ships. Seriously, there is no way I could avoid getting obsessed with this game.

I’m not surprised it’s a solid title. It was developed by Foursaken Media, the folks behind the Bug Heroes titles. I expected it to live up to that pedigree. I just wasn’t expecting it to grip me so completely. I’m checking my phone several times a day to make sure I’m still ahead of the pack and furtively sneaking in extra rounds if I’ve slipped down the ranks. 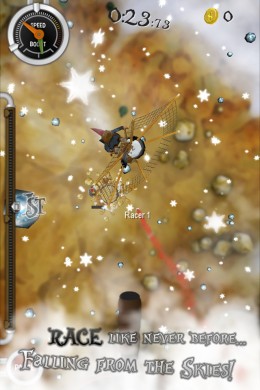 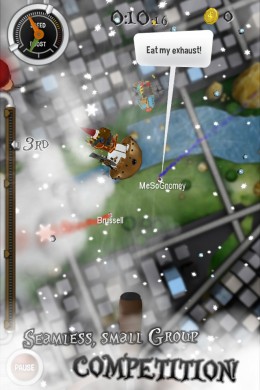 The game’s tournament structure is brilliant, and it’s what drives my obsession. There are four race cups to compete in, three of which can be unlocked over time. Each one has its own theme, length and difficulty level. Each day you’re placed into groups based on your previous results, so everyone starts on even footing. You play against ghosts of your group mates, aiming for a quicker completion time than the rest of them—especially the one randomly assigned as your nemesis. 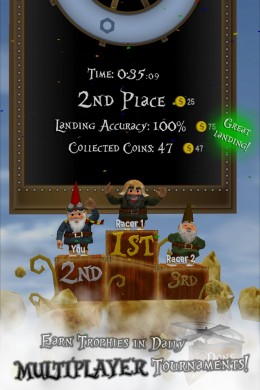 The more successful you are, the better you’ll be rewarded. After each race your performance is broken down by your placement in that race, the accuracy of your landing and the things you pick up along your route. You earn coins for those, and overall rank for your finish time. You also get a random part from a selection of nuts, bolts and gears. At the end of the day you’re compared against the rest of your group. If you place high enough you take home a big bag of coins, and if you beat your nemesis you’ll get even more.

There are other rewards, too. Each cup has achievements to earn, and earning a set of them bumps you up to a new tier. That unlocks the next cup and gives you coins and parts to mark your success. Each day also offers up a new, special goal. It might be something as simple as taking gold in a race, but it’s often something more esoteric like finishing with an exceptionally low time. Having all these different things to work toward makes it easy to enjoy yourself even when you’re not always winning.

In fact, even when you’re losing you’ll still have fun pulling in coins and parts. Then you can use them to upgrade your ship. Each upgrade costs a mix of things, usually a few thousand coins and a handful of assorted parts. The economy is most limited by the rarity of gears—you only earn one randomly every few races, and most upgrades cost one or two for the first tier alone. But those upgrades are so very worthwhile. 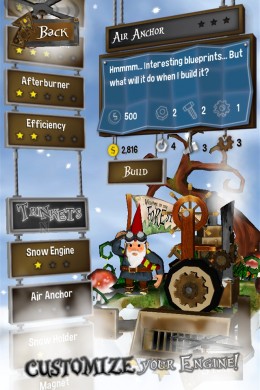 You can upgrade the engine of your ship, improving its speed, acceleration, afterburner and efficiency. You can unlock and rank up a host of powerups. You can also get yourself three slots for trinkets, and that’s where the real fun comes in. Trinkets can do all sorts of crazy things. They can magnetize your ship so you pull in coins more easily, they can improve your steering, or they can make it so dangerous obstacles like storm clouds can be used to boost your speed. They’re costly to upgrade, but they can make or break a run.

Choosing them is a strategic process, or at least it’s meant to be. You can check the weather before each race and adapt your plans, focus on speed or survivability or income. Unfortunately right now it seems like certain combinations outdo others significantly, but Foursaken is keeping a close eye on the trinket balance and plans to adjust it if necessary. Even if the popular combos are great fun to play with, it would be nice to have more viable options.

I should also give you a heads up: you can purchase coin and part packs. These aren’t quite your typical consumable IAP items since they’re used for permanent upgrades, but they feel pretty similar. The way your daily groups are selected keeps upgrades from offering a significant advantage, thankfully. They do offer a bit of one, though, since you can use your upgrades to boost your capabilities after you’re placed. At least the IAP packs are well balanced, so purchases won’t put people far ahead of the folks that are willing to grind. And frankly, the grind is pretty fun on its own.

That’s the thing of it: while it’s pretty obvious that Sky Gnomes is using a grab-bag of standard psychological tricks to keep players coming back every day, I can’t bring myself to mind. The racing is seriously fun. Once you manage to gear yourself up enough you can compete with players for top overall scores, hitting the Platinum league in each race and ranking at the very top of the daily leaderboards. If you get there, make sure to spend some time in our discussion thread—our forum users are dominating the charts. By the time you reach that point you’re travelling through races at insane speeds, sucking up coins and snowflakes, dodging obstructions like a champ. It’s a great time.

And that’s what keeps me coming back. There are small issues aside from trinket balance—setting your time early in the day isn’t worth much, and even at the highest ranks your success will be partially based on luck—but they are hardly a blip in the fun to be had. There might be an end somewhere in sight, a time where the grind outweighs the entertainment, but the hours of fun to be had in the meantime are well worth the initial purchase. Don’t miss this one. I’ll know, because I’ll be waiting for you out there on the podium.