Kairosoft really got gamers fired up when they released Game Dev Story in Fall of 2010, a sim where you took the reins over building your own game company from the ground up. Then, they realized we liked the formula, and a flurry of other “stories" followed. Pocket League Story. Venture Towns. Grand Prix Story. Mega Mall Story. It was fair to say that most of these games had a lot in common: build a business or town from the ground up. And while I admit I was a major fan, I don’t know that I would have sprung for another title in this series if there wasn’t a little spice thrown in to change things up a bit.

Luckily, Kairosoft also realized we felt that way, and Epic Astro Story [$3.99] is the result. If you take the building sim thing and mix it with some Star Trek and a dash of Phantasy Star for good measure, you’ve got a pretty good idea of what to expect here. Just in case you’ve never played a Kairosoft title before, they give you the reins on building something and managing its growth, much like SimCity. 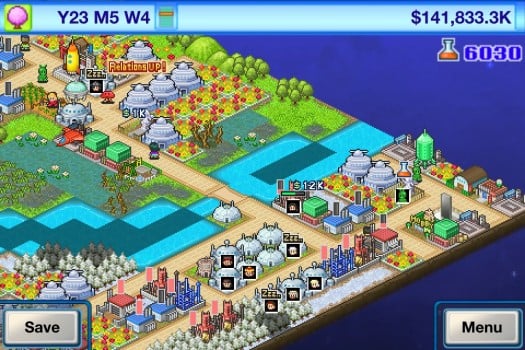 In Epic Astro Story, you attempt to colonize a planet. The new stuff comes in the form of away missions, which are totally hilarious and buff up the gameplay in a way I really enjoyed. As a solid Trek nerd, I was extremely amused to discover my first residents were “James Turk" and “Jean Vicard." Later you’ll be joined by Wes Smasher (which cracks me up every single time he says something), Bones Mc Gee, and many more great riffs on the classic Star Trek universe.

The away missions are handled very smartly by a little bar across the bottom of the screen, which takes up very little real estate but makes you feel involved with what is going on. As the team encounters question marks, they will experience events, which can be good (finding money) or bad (finding monsters). If you do find monsters, you’ll go into a battle mode. You can actually get a peek at your enemies and their hot points before you start a battle, and it allows you to equip your team accordingly and choose their placement on the field before a battle. Once it starts, it’s all automatic, but the battles are quick and a great way to earn both money and research points.

If you thought you had a lot to manage in previous Kairosoft games, you have even more now. In addition to building on your land, positioning landscaping for maximum benefit, and keeping an eye on your residents, you’ll also choose when the away team explores new territory and invite people from other planets to come live on yours. Tourists will fly in and out of your Space Port and attempt to make peace with your people. You’ll meet aliens in ships. It’s a lot to manage, but it doesn’t feel over the top or stressful.

On the whole, I think Kairosoft has done a good job dressing up the basic formula. It’s still fun, and the fighting is a welcome addition. I admit I would like to see the company do something completely different in the future, but as far as this goes, it’s my favorite title of theirs yet. Mixing elements of the core simulation gameplay from previous Kairosoft games has worked out extremely well for Epic Astro Story, and if you’ve found yourself enjoying their other titles then this one should be no exception.

However, I’m still waiting for Spock to show up. I pray they changed his name to Glock.