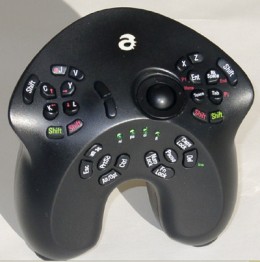 Here’s an interesting rumor: Apple has worked on a controller for its devices, according to a couple of lines in Anandtech’s iPad review. Here they are in all their glory:

I know of an internal Apple project to bring a physical controller to market, but whether or not it will ever see the light of day remains to be seen. As smartphones and tablets come close to equalling the performance of current game consoles, I feel like the controller problem must be addressed.

Play with us for a second and consider this: what would the easiest way to stop all the fracturing inside of fracturing going on in the third-party controller space? If Apple was to do something with a peripheral, we wouldn’t be writing a story every week about a brand new controller that has its own proprietary code that studios’ need to plug into their software. Everyone would just automatically support Apple’s New Thing, and there would be no other viable market.

But, that’s just reading tea leaves inside of tea leaves. Also, there’s a billion ways to read into this, if it’s even accurate, which we doubt, since a controller compromises that vision of iPad and iPhone. These things were meant to be used with our fingers, not with styluses or controllers or other peripherals.

Then again, who knows. Maybe this will be a “one more thing" at a keynote.

[via MacRumors, via AnandTech]