When Hunters: Episode One hit the scene almost a year ago, we were impressed with its solid gameplay and daily mission structure. With Hunters 2 [$4.99], Rodeo Games looks to expand on the success of the original with additional content while attempting to address some of the shortfalls of the original. While Hunters 2 has its share of nagging problems, there are more than enough improvements to the core gameplay to make this sequel worthwhile.

As expected, gameplay in Hunters 2 is comparable to its predecessor. Players still deploy and guide hunters through a variety of environments (complete with fog of war), taking out opposing forces in furtherance of hitting mission objectives (which typically involve defending an objective, reaching a marker or just taking out all forces). Both the leveling and equipment systems return, offering a variety of different ways to upgrade your hunters. Also making a return is the daily mission hub, offering new contracts with different maps and objectives every day. At this point, Hunters 2 offers more of a ‘tried-and-true’ approach to turn-based strategy, leaving little to error or imagination. 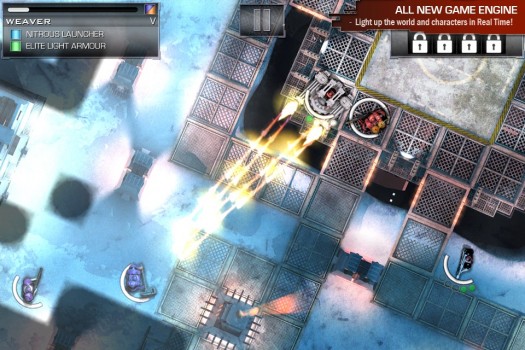 While the gameplay is mostly similar, Hunters 2 does add a few new elements to the mix. In addition to fighting against other hunters, the game introduces a new alien race that has its own attack style. The aliens play a role in the new campaign mode, which finally offers a story experience to the Hunters world.  Hunters 2 also combines the previous Health/Armor system into simply Armor, streamlining weapon damage. A new crafting system also allows players to customize a wide variety of weapons (at a premium price). Permadeath also makes its debut, offering genre fans the opportunity for a more hardcore experience. Finally, the sequel overhauls the talent system, providing a great deal more customization for individual hunters. 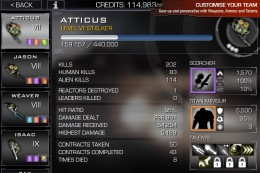 This new upgrade system is at the heart of the Hunter 2 changes. Hunters are assigned two of six possible talent trees, which provide perks ranging from additional benefits while guarding to increased weapon damage and armor protection. Players can hire new hunters with different talent trees, although only a limited amount of hunters are available to hire at any one time (hunters for hire cycle every few hours with the rest of the in-game shop).

Level design has also improved in Hunters 2, with a bit more variety in environment and size. However, I still noticed that some of the tile sets appear to be recycled from the first Hunters. Visuals are also well done, with fast, fluid animations (although I think retina support for the new iPad would have been a nice addition). However, I did encounter a strange lighting bug that would completely wash out the environment colors and make the game very bright.

One feature that is sorely missing in Hunters 2 is the inclusion of iCloud support. Considering the amount of investment you can have with building up your team in terms of loot and stats, I really would have liked the ability to move saves between different iOS devices. This is especially true since Hunters 2 plays great on both iPad and iPhone.

Despite its inclusion of a story-driven campaign, plot is still somewhat lacking in Hunters 2. The number of set missions is incredibly small and the tale being told lacks any kind of narrative punch to serve as motivation for continuing the campaign. Granted, some gamers will undoubtedly not care about a story, but I just found it a little disappointing.

Still, despite my above complaints, Hunters 2 continues to do a great job preserving the core gameplay mechanics of Episode One. The leveling system and large variety of weapons keep me coming back  to play missions simply to earn more gold and experience to refine my hunters. Also, the loot system and daily mission structure do a great job promoting replayability. As mentioned above, there’s nothing new or particularly innovative, but it’s still implemented well.

It goes without saying that fans of Hunters: Episode One will have a great time with Hunters 2. The tweaks to the leveling and upgrade systems do a great job streamlining gameplay while the inclusion of an actual campaign and additional difficulty options are welcome additions. While the incremental upgrades probably won’t win over gamers that weren’t fans of the original, Hunters 2 still offers a compelling turn-based strategy experience.