I have to admit, I wasn’t sure what to think about Picnic Wars [$0.99 / HD], a castle crusher showcasing the epic feud between vegetables and fruits (which somehow takes place during a picnic). Yet, despite the absurd story, what follows is a decent take on the genre with a good amount of gameplay variety that unfortunately suffers from a lack of content.

In Picnic Wars, you take the role of either fruits or veggies as they seek to destroy the fortresses of the other. You accomplish this by flinging various units at the castles, causing as much mayhem and destruction as possible. Truthfully, I have no idea what picnics have to do with the story, but seeing how zany the concept is I didn’t bother thinking about it.

Gameplay is a bit more complicated than simply tossing fruits or veggies at the opposition. Players take control of up to five different launchers on an isometric grid by moving them up and down the grid to aim. Each launcher can also be upgraded, with some units being more effective when fired from a certain launcher. Meanwhile, the opposition is throwing utensils at your launchers which can damage and eventually destroy your weapons. Combine this with a countdown on each mission, and gameplay in Picnic Wars becomes a bit more fast-paced than other similar games. 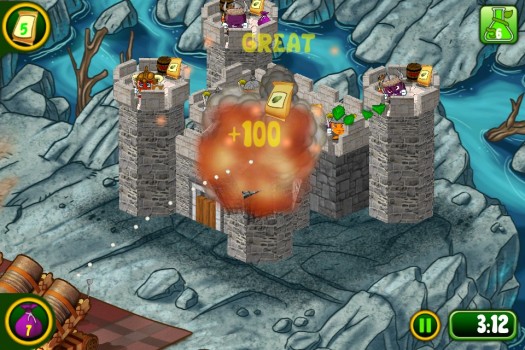 However, before you can throw your units, they must first be grown with seeds. Each unit takes a certain amount of seeds and time to grow depending on its strength. In addition, you start with a limited amount of seeds but can obtain more by aiming your allies at scattered seed bags located within the enemy castle.  Plant projectiles have lots of different strengths and attributes, such as the garlic that turns into a group of mini garlic grenades to the cabbage that acts as a delayed grenade. Players are scored based on speed, item collection, and total destruction.

I thought Picnic Wars did a good job creating a fun, varied gamplay foundation. There are a ton of different fruits and veggies to grow, and almost all of them are viable through the majority of the campaign. I also really enjoyed the isometric view which provides a bit of strategy as to where you want to launch seeing as how you may not be able to see some enemies until you take out certain sections. Controls, however, can be a pain as the same isometric view also leads to situations where you have to move some launchers just to tap on others, wasting precious time.

A hard mode is also available, which allows you to play through all the levels again with different units. Hard mode also increases the likelihood of catapult destruction and also removes the targeting sights, making it a bit tougher to accurately aim your shots. I personally loved hard mode, as it provided the perfect amount of difficulty that was missing from the easy mode.

Visually, Picnic Wars boasts a colorful, cartoony style that works well for the content. The game looks great on retina-iPhones, but not so much on the new iPad yet. The music also reflects the quirky feel of the game, although I wasn’t a fan of most of the sound effects (too annoying for my tastes). Strangely enough, the game also had load times between levels that, while not excessive, were still long enough for me to notice.

While Picnic Wars touts a total of 64 levels, in reality you’re getting two campaigns of the same 32-levels with the only difference being that you play as fruits in one campaign and veggies in the other. Each campaign has its share of different units, but the actual maps are the same, offering little in variety to players that have already completed one of the campaigns. Considering how swiftly you can get through the ‘easy’ campaign, you’ll be hurting for more rather quickly.

I’m a bit disappointed at how little there actually is. When you take into account the decent gameplay mechanics and visuals, Picnic Wars ends up feeling like wasted potential. If you’re willing to check it out I have no doubt that it should provide some enjoyment. However, be advised that enjoyment will be short-lived.