Flight Control Rocket [$.99] is beautiful. The art is pyrotechnic: the groovy colors are sharp and detailed, betraying no fuzz, gloom, or jagged edges on the new iPad. Even the menus have flair. Created intricately to reflect the swinging sci-fi themes that the rest of the game is so gleefully entrenched in, they’re a pleasure to plumb. The on-screen antics feel just as good, as Firemint has iterated on the core design in really fresh ways. But, it’s a shame that all of this is wrapped in the stench of corporate influence. Some of the most interesting additions to the core play model are rendered meaningless courtesy clumsily handled free-to-play functionality.

The sci-fi influence, outside of the slicker and more vibrant visual appeal, is just a fun contrivance to push the series’ usual conceit: take a ship, plot a course, and then repeat until the screen is so full of ships, that it becomes impossible to not avoid a mid-space collision. New features include a fascinating variety of ships with abilities, all of which refreshingly change up the pacing. There’s 15 new ships in total, including a snake-like series of ships that coils as you move it, a ship that splits into two, and even a new drop-ship type that spits out smaller ships into the playing area. 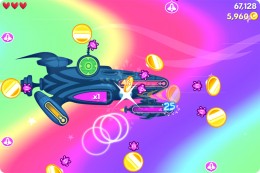 The new ships also feel like stopgaps, designed specifically to keep you from developing a rhythm or from zoning out. Flight Control is usually just an effort in concentration; but with these, it is becoming a much more viable strategy game. There’s enough content on a micro-level now to warrant focus, forethought, and tactics.

To its credit, the action stays manageable despite the varying seeds, sizes, and the abilities of certain ship classes. In part, this is because the action feels a hair or two slower, but there’s also a new health component that allows for a couple of hiccups along the way, whereas the previous game just ended after one collision. It also doesn’t hurt that this series remains a breeze to play: tap and trace, that’s it.

A not-so-clever IAP system sours all of the good vibes these parts of the experience can offer. As you play across the game’s two modes, endless and a time-based survival mode, you’ll earn pieces of optionally purchasable in-game gold. You can use this, in turn, to buy robitic avatars that grant specific bonuses during play. The starter robot randomly ratchets up the score of a landed ship, for example, while others bump up gold earned or grant you extra lives. These sound neat in theory, and they would be totally fun adds if (a) they weren’t saddled by egregious IAP loops, and (b) weren’t laughably expensive.

In order to use a robot more than three or so times, you need to spend in-game gold on the batteries to power them. IAP loops consistently strike me as beyond tacky, and in this situation, they’re rigged in the game’s favor. Also, my mental math says it’ll take me at least a dozen hours to obtain one of the top-tier robots without spending any dough, which is especially silly considering this game costs real money to begin with. It’s sad. The robots idea is a casualty of a crazy business model that is too aggressive, too Facebook-y to take seriously. It’s a big, black eye instead.

Minus the free-to-play shenanigans, Flight Control Rocket is easily the best entry in the series so far, as it sports a lot of fresh and fun ideas, as well as a groovy new theme that Firemint fleshes out splendidly throughout. It’s also one of the best looking new iPad games. But, the free-to-play components do exist, and they keep the experience from feeling like a cohesive whole. This game is split into parts, as a result, and the bad has a habit of putting a damper on the good. 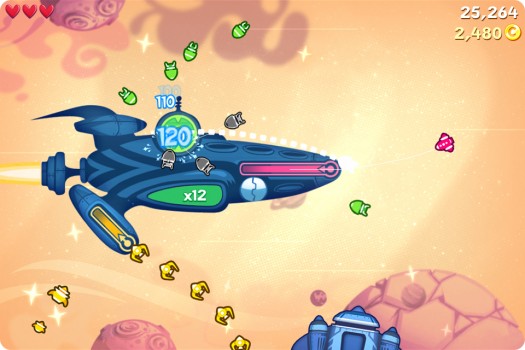 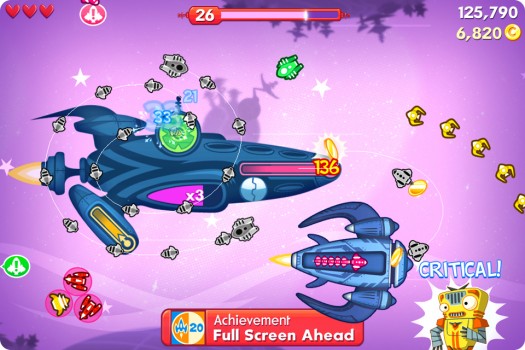