In another world during another time, roving bands of mercenaries die with staffs and swords clutched in grimy, blood-stained hands on epic quests to seek out fame, fortune, glory and honor. Also, tax relief — precious, precious tax relief. Kameloot’s king has pumped up the tax on gold to unbelievable levels, but he’s offering a way for cities to opt-out. It’s called the “Grand Gossip Notoriety Prize," and the competition in the kingdom is getting stiff as heroes of all shapes and sizes, as well as bandits, monsters, and other various bump-in-the-night stuff, vie for the break.

It’s this not-so-subtle lighthearted edge that gives Digital Tales‘ Battleloot Adventure its legs. It has all the usual tropes, including the classes, items, and structure, of a 16-bit era RPG, but it put a lot of weight behind them. It knows that swords, zombies, wolves, claymores, and magic are as tired as the M4 is becoming, so it focuses on the fun inherent in playing a fantasy game instead. Things like loot, combat mechanics, and art design are what it leverages. 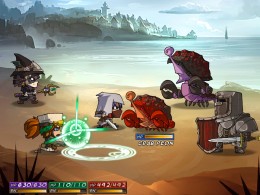 This easygoing attitude is sinuous, as it winds and curves and penetrates into basically every aspect of the experience. The world of Kameloot feels playful; cities and castles are bubbly and inviting, while backdrops are sketchy and bright. Even the weapons and armor and the characters of this world reject straight lines and sober tones. Everything is goofy — even if that thing is trying to squash your head into bite-sized pieces. Check out that screen and you’ll see what I mean.

Having your head squashed is an unfortunate side effect of not taking battle seriously, by the way. At its core, this is a strategy RPG that, like others in the genre, isn’t afraid to be punitive when you make a bad choice. Damage in combat is largely dictated by a rock, paper, scissors style of balancing. Pit rock against paper and you’ll feel a bump or two a couple of turns down the line, guaranteed.

Parties consist of three fantasy warriors, each of which has a specific color and class. Battles are fought in instanced zones freely picked from the world map. Generally, you’ll be fighting against three or four others. Some battles have multiple phases, and there aren’t stat refreshes between them.

Digital Tales subscribes to the Keep It Simple philosophy. Tap on an enemy to attack. Touch a UI element to activate an item or special power. Tap on yourself to defend. It’s a miraculously simple setup, but that doesn’t make the strategy simple. What looks to be this game’s greatest accomplishment is how much has been streamlined into the background. Stats like strength and dexterity still guide a character’s abilities and there’s some degree of dice-rolling when it comes to negative spells, but you never really have to interact with this stuff. There’s also a lot of automation in battle. Healers, for example, automatically heal at a turn’s start, while rogues automatically throw accuracy decreasing potions. 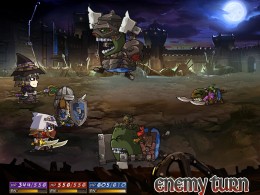 “We wanted to move away from the typical, number-crunching world of core RPGs and reach for players who would still enjoy the pleasure of managing their party of adventurers without worrying about hit chance percent or armor coefficients," Digital Tales’ Andrea De Siena says. “We tried to make combat more about choices than maths by streamlining such elements as stats, damages and special skills."

“We wanted to entice both casual gamers and RPG aficionados alike with a simple yet strategic combat system, where you’re free to focus on what you like most: if you’re a newbie, you will easily jump in but you won’t be able to simply button-bash your way to the top; if you’re a seasoned RPG veteran, you will enjoy some well-deserved gameplay depth, mastering the edge system, energy management and talent and equipment choices."

“Do you think that’s an ambitious mission statement? It probably is, but we’re not afraid: we have robot chickens, pumpkin-men and sheep-bombarding gryphons under our belt," it jokes. I’ve seen a robot chicken and I can confirm that it is glorious.

Defending has an interesting price: it lowers an energy bar. Energy guides the action-y components. With energy, for example, you can attack enemies with several party members at the same time. Energy usage also closely ties into the “star" system. If you pull off a big combination attack, you’ll be rewarded with a star that can then, in turn, be used to activate big-time class-specific abilities. 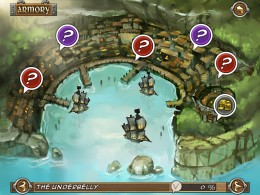 The combat doesn’t feel as fluid as Digital would like. It’s still turn-based, so there’s a degree of sluggishness inherent with this kind of design. But battle does operate rather without any hassle on your end. The fighting in general, actually, seems as sweet as a chocolate, and it keeps me playing more so than the loot component, which in most RPGs that stress gear and new items like this one does, always ends up providing the actual fuel. It’s nice to see combat take the front stage for once.

Speaking of loot, expect to get plenty along the way. As you level up, more and more items that match your level unlock. Winning fights earns you coins, and you can spend this change buying these unlocked items. Special “guild" missions unlock new items as well. Rich swathes of UI and tons of equipment, like rings, swords, armor, and shields, as well as hates, should keep the collector busy. This is also tied to an IAP system, but I get the impression that it’s just there for people who don’t care for grinding.

Most of the world navigation is just cut-and-dried, task-focused stuff. Find an open zone, jump into battle, and then repeat. Later in the game, after a hefty tutorial, you get introduced to a more political component: guilds. When with a guild, you get certain bonuses, and you can freely switch between them as the story unfolds and the fights get nastier and nastier. In my short time with the game, I didn’t get to experience this as much as I’d like. I’ll be stoked to see it in action when the retail version hits.

In all, actually, there seems to be a lot to like here. Most fantasy games get so into themselves, so muddled in their own goop, that it can be hard to see what separates them from the rest of the pack. Battleloot is different. It wears everything on its gleeful, not doubt dapper, sleeves. It’s funny, it’s cute, it has a lot of depth to offer, and above all, it appears to be fun.

My total time has been short, so expect some additional coverage down the line. You can keep an eye on the game’s progress via this message board thread, or hey, give it a try yourself next week if the Apple approval process goes well.